All the rest of NZ! 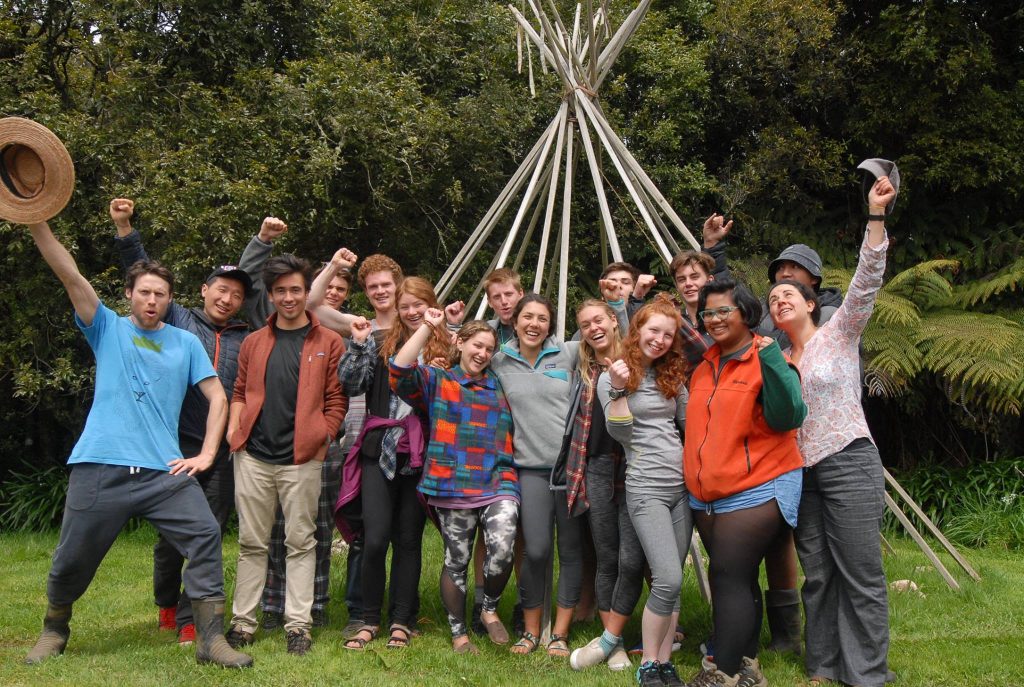 Adios Student Directed Travel! Let’s take a moment to admire how much ground we covered, meals we ate, places we stayed, and the people we’ve befriended along the way. Go Hongi!

Now moving on. Our new host, Tiaki, took us to a retreat cottage. Upon arrival he introduced us to Rob, an elderly man you could just look at and tell he was filled with wisdom. We helped him cut blackberry thorns, set up a tent structure as well as maintain a fire. No one had any idea what we were going to do. Then Rob asked “So have any of you participated in a sweat lodge before?”. A sweat lodge ceremony. Most of the initial reactions were fear of over heating. The ceremony was split into 4 rounds. Turns out the tent we helped build was actually the lodge in which we would be flooding with our sweat. The ceremony, Rob explained, was to cleanse us of all the extra worries in our lives that serve no purpose to us. They began the ceremony by blessing the space and inviting in the Grandfathers in. The Grandfathers were the hot rocks that Rob poured the water onto. During the process we were asked to give thanks, release any emotions we no longer need and invite in something new. It is an odd feeling to be surrounded by others participating in the same activity and yet having a completely individual experience. Heat and the darkness can steer ones mind to dark places, but when you emerge from the lodge, despite the setting sun, the world couldn’t have looked brighter.

The next morning we said our goodbyes, packed back into the van, and made our way to Raglan to stay in another Maori community. On the grounds of the Marae we were called into the house by the call of the woman. We entered and the formal greetings began. The family housing us sang the most beautiful, harmonious song we have ever heard. We returned the favour with our defiantly in tune Maori song, “Te ahroma”.

The day granted us new friends, Tomaho, Mati, and Tukuna. They were local Maori kids our age and you want to hear something amazing? We all get along. Just goes to show that even when you grow up on different sides of the world with different cultures, different this, different that, laughter is still universal. We’re all still kids at heart and we want to have a good time, it was refreshing to be reminded of that. We danced on the beach, free styled, and played our now new favourite game, Pukana. Tuesday left us with good memories.

Maori. It’s a hard concept to explain yet the easiest to understand. Maori just is, it’s in everything living or not. We got to learn about this concept by traveling up the Red Mountain. Tiaki lead our bodies up a steep and narrow path. Mud was everywhere. Regardless of the muck we were able to make the walk. The track suddenly split open revealing the sights previously blocked by trees. Have you ever seen the ocean from the side of a mountain? If you answered yes then you know how hard it is to describe every feeling, thought, and sight that blasts through your head. The wind that blew had the kind of strength that makes it hard for your eyes to open. Through squinted eyes we watched the grass dance wherever the gust directed. Tiaki gave us a small session on what it means for things to have Maori. When the session ended we made our decent down. It felt more like a slip and slide as opposed to a casual stroll. Alas we all made it safely to the bottom where we were then asked to blindfold ourselves, put our hands on the shoulders of someone and trust in them to lead us where we needed to go. Tiaki lead us in the front (don’t worry he was not blindfolded). After about 10 minutes of what seemed like pointless wandering we were asked to take the folds off. We were standing on the deck of a lookout point. Not a bad sight after not having any. We all soaked in every second. Time is going by so quickly, no use in rushing the good times.

In the evening the group became completely immersed in the Maori language. No english allowed tonight! Despite not being able to understand in the beginning, by the end we were able to say our mountain, river, hometown and name. Miscommunications can be so unfortunate, but with a little patience every language can be heard regardless of the native tongue.

Kaitiaki. This means guardianship. We met two examples of Kaitiaki by the names of Rick and Liz. We were driven to their farm and greeted by the sounds of birds, dogs, pigs, goats, and various other animals unknown. The guardians took us around their farm explaining the different techniques they used to maintain such a successful area. One of the most simple ways to have a healthy farm is to mimic mother nature. Learn from what she does and you’ll be able to have a bountiful season.

Later in the evening we had another immersion activity. Ladies will be learning a love song while the men learn a Haka. Even though english was welcomed, the process of learning was still a little difficult. Singing and chanting in another language is so powerful, you want to do the words justice. Puti Puti was a song about sharing carnations with your lover, while the Haka was a dance about a chief on the brink of life and death. Each performance had a different form of energy. I can assure you everyones blood was pumping after the men performed, even the audience members hearts beat faster.

It was an early morning for us on the 19th. We had to get our booties moving in order to start canyoning! For those of you who don’t know, canyoning is wading through a river, going up and down waterfalls, jumping into small pools, and just getting to become one with the water. Imagine white water rafting. Now imagine no raft. Now imagine the water being incredibly calm. The experience was really relaxing and laid back. Connectivity was the main idea to think about when beginning the excursion. From the sun to the ocean, all things are connected. Mess with one part of nature you mess with every part.

After canyoning we cooled it down a couple notches with a short course on weaving. Harakeke, or flax, is a very durable leaf. The process in making something as simple as a bracelet holds the same level of respect as if we were making a gown. One of the procedures is to dispose of the scraps correctly. You can’t just go sweeping them off the porch or toss them in a rubbish bin. It’s a really enlightening process because you really put heart into what you create so making it becomes special instead of speedy. You can’t get these bracelets just anywhere! Machines can’t put love into their products but Maori showed us we can do it for our own.

Dawn of the final day. It has been such an incredible time in New Zealand and I can’t believe it’s coming to a close. We end our chapter with humbled hearts, brightened eyes, and widened minds. We have to send a huge thank you to all the hosts and communities that took us in. Though we did help as much as possible our contributions were not nearly as impactful as all of the wisdom and knowledge passed down to us. We have grown together and individually since the start of the trip. We have grown for the better. It will be bitter sweet to move onto our next destination. Though sad, it’s nice to know we’re leaving with a new whanau.
-Melanie