These tidings come to you from ya boy Peej, ya girl Ellie (aka Estelle aka Ellsworth), and ya homegirl and a half Cate the Great 8.

‘Twas the week before Thanksgiving, and all through the group, not creature was stirring, because 80% were dying from various stomach ailments. But no matter, we were off to Semuc Champey to begin our week of student-directed travel, harrah!

The groups prudent, fearless, and revered leaders PJ and Katie wisely choose to ease the increasingly ill group into the week with a brisk 15-hour van venture across the Guatemalan highlands. We began the morning as gorgeous, blossoming young yogis saluting the sun on the waterfront Magical Mystery Yoga Farm on Lake Atitlan, but just a boat, a van, and 4-wheel truck drive later we were meandering into our spacious hostel at Semuc Champey at the mere hour of 2 am.

For the laymen out there, Semuc Champey is an isolated earthly wonder in and of itself. To describe it simply, it is series of river-fed, crystal blue lagunas over a very gradual natural staircase of limestone beneath which the violent Rio Cahabon passes. Above and below the lagunas are terrifying, mud-brown rapids, but within was our slice of happiness, complete with street meat and rice for just 5Q.

Our first full day there was spent floundering in the lagunas and enjoying the wonderful view from above. Dylan and Jimmy executed clean back-flips into the pools, Ellie discovered a small cove beneath one of the limestone steps, and even Jon, feeling somewhat “enfermo” (sick), ventured as far as dipping his feet into the cool lagunas. It has been said that such a day is too full of activities, but PJ and Katie disagreed. That night we hosted the first and only high-stakes poker night. But being aware of the legal and ethical dangers of gambling, we all created aliases to remain anonymous. Method actor Katie spent four weeks in a Guatemalan women’s prison, covered her body in real tattoos, and legally changed her name to “Kay-T” to fully enter her character of “Prison Kay-T.” Other aliases included Jake as a youthful and gaily Peter Pan, Cate as hippie dippy “Tay Tay” (a yogi master from the Magical Mystery Yoga Tour), Bradley as the worst Bob Marley ever, and Doug as Anya and Anya as Doug. Anya as Doug ended up finishing off Doug as Anya in the last round with four-of-a-kind, a poker hand only found in the far-reaches of the Mayan jungle.

The next brought our first tragedy: Maggers was down. Various health concerns drove her, and Doug (now as Doug), to a hospital in the city of Coban, a short 4 hour truck and ambulance ride away. We were worried until we saw a picture of Maggers in the ambulance strapped to a comfortable gurney just next to a turkey strapped down even more in a basket. We knew she was safe, and that if all went sideways she would have something for lunch.

The rest of the group undertook an exciting 2-hour adventure into the nearby K’an’ba and tubing down the Rio Cahabon. The cave tour felt out of an Indiana Jones movie – our only source of light were frequently-extinguished candles. The tubing was chilly but worth it if just to meet the boisterous Guatemalan (appearing out of literal thin air on tube with a mini-cooler) who attempted to sell us beers.

After an action packed 2 days at Semuc Champey we were on the road again, just a 12 hour bus ride. Just 45 minutes in we were stopped by a broken down truck filled with cinderblocks. It just took Jimmy, PJ, and Dylan, along with some local Guatemalan men to push the truck sideways, making way for a new road in the bushes. Once we passed and got to Coban, we were greeted by a good spirited Maggie with bags of cookies and bread. Then we were off! We got into Antigua right in time for dinner. Finding a Little Caesar’s right around the block where 7 of us were able to have a little taste of home for just 20 Q. The sick decided soup would be a better option.

As the morning dew melted off the frosty rooftops of Antigua, we awoke to the sweet smell of pancakes and French toast as our complementary hostel breakfast. It was then that the final decisions for the student-directed week were conducted: whether enough of our group could muster the health and courage to brave the elements up the high volcanic peak of Acatenango for an overnight backpack. Gathering around the table, we agreed that although (with heavy hearts) the sick and injured could not make the hike, the hike should still be a “go.” The hikers then proceeded to meet the backpacking company where they were told recent tales of death and injury atop the 13,400 foot summit – but we they not to be deterred. It was that same day that Maggers made the reluctant but wise decision to head home. That night we all hung out together at the Rainbow Cafe to bid a loving farewell to Maggie, who although we would miss dearly would have a much more stable recovery stateside.

And alas, bright and early at 6 am the hikers (Dylan, Jillian, PJ, Jimmy, Jake, Katie, Jon, Ellie, and Doug) headed to defeat Acatenango. The first hour was the rude awakening. We were hauling our filled backpacks up steep farm fields before even entering the park. Once we entered the National Park we were greeted by less treacherous switchbacks through the cool and beautiful cloud forest at the base of the volcano. After 2 hours in the cloud forest we emerged into the pine. Doug and Ellie felt like they were back in their home state Colorado with the cool air, decreasing amounts of oxygen, and pine trees surrounding the path. After 4 hours and 45 minutes filled with sweat, muscle pain, granola bars, peanut butter and jelly’s, and some strained smiles, we made it to an unreal camping spot. We set up camp with a perfect view of the active volcano Fuego and got to witness countless volcanic eruptions throughout the night. As the sun went down, the dark Smokey mushroom clouds disappeared and the lava started pouring. In between shoving mouthfuls of pasta and roasted marshmallows into our mouth, we sat in awe of the earth shaking volcan Fuego explode with lava and loud booms. Though we could’ve watched the volcano all night, we had to get to sleep early to get up in time for the presunrise hike the next morning.

At 4 in the morning we all woke to our guide shaking our tents saying it was time to get up. We had a restless night battling cold and loud booms, so it was a difficult start to the day. We started hiking up to the crater of Acatenango. We were lucky to not have any wind headed to the top. After getting to the summit, somehow PJ, Doug, Jimmy, Jon, and Katie mustered up some more energy and strength to run around the 1 km crater in order to receive a free OX adventure shirt. PJ finished in a remarkable 2 minutes and 50 seconds cutting Jimmy off who finished with a close 3 minutes and 10 seconds. All finished though and received some pretty sweet shirts. After an eventful morning, we made it back down to our campsite and had an amazing breakfast of banana bread covered in our choice of peanut butter, chocolate spread, jelly, or cream cheese. After we packed up camp we started our descent. All of us took turns slipping and sliding down the volcano, but unfortunately Katie took the worst fall and twisted her ankle and scraped her knee. Our guide chopped down some branches for her to use as trekking poles so she was able to make it down the mountain without another injury.

Back at home base heartfelt goodbyes were given as Anya and Maggie took off to the airport whilst Tori, Bradley, Anna and Cate rested at the hostel and explored the city. Later that afternoon an art museum was visited as well as an artisanal market and a crepe place.

The next afternoon the group was joyous to be reunited and rest and catching up overcame the evening!

We were off to El Paredon the next morning thanks to the help of Abell, our micro bus conductor. We were all more than ready to have a relaxing, fun, informative week on the beach!

Signing off, Ellie, PJ and Cate 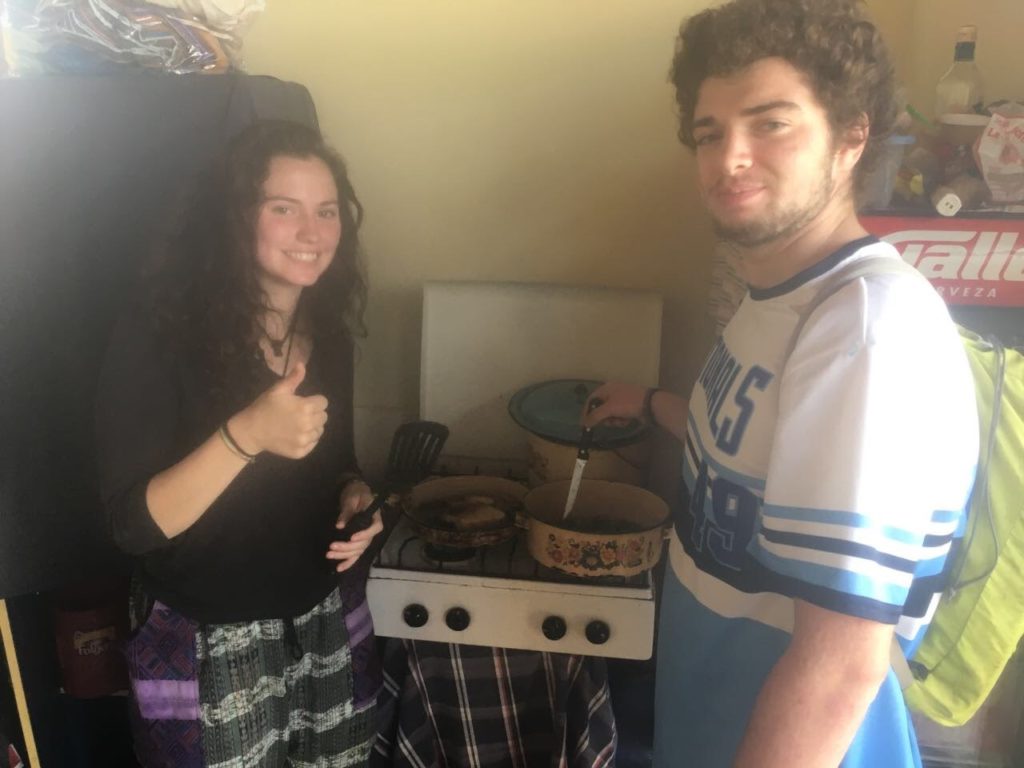 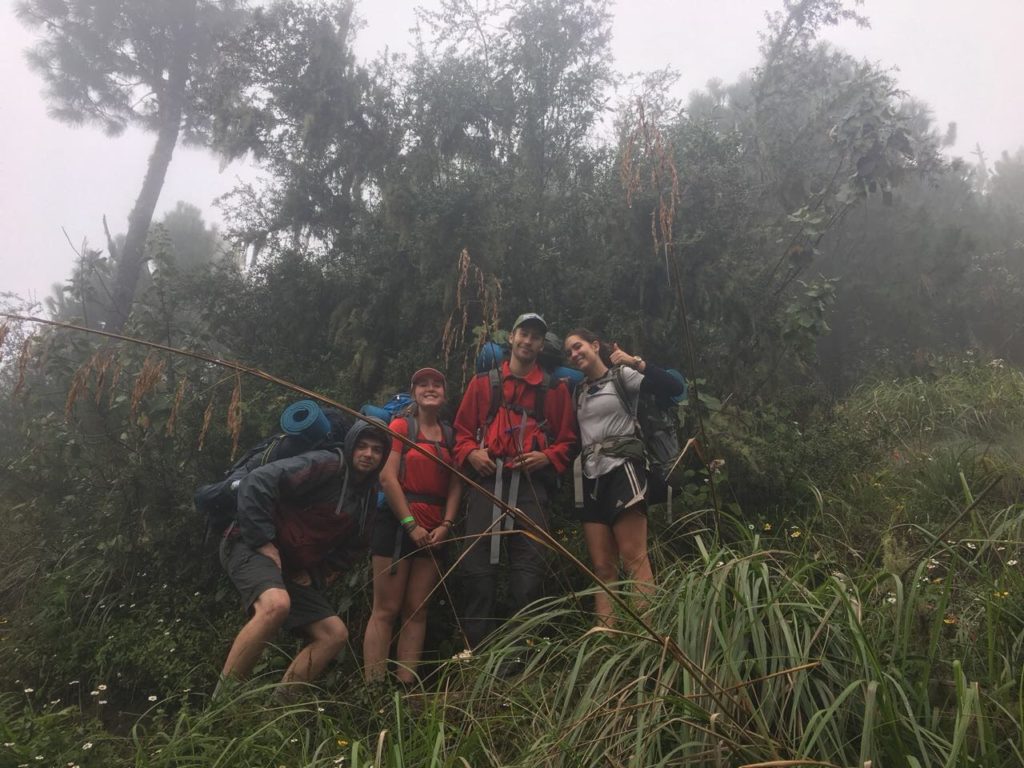 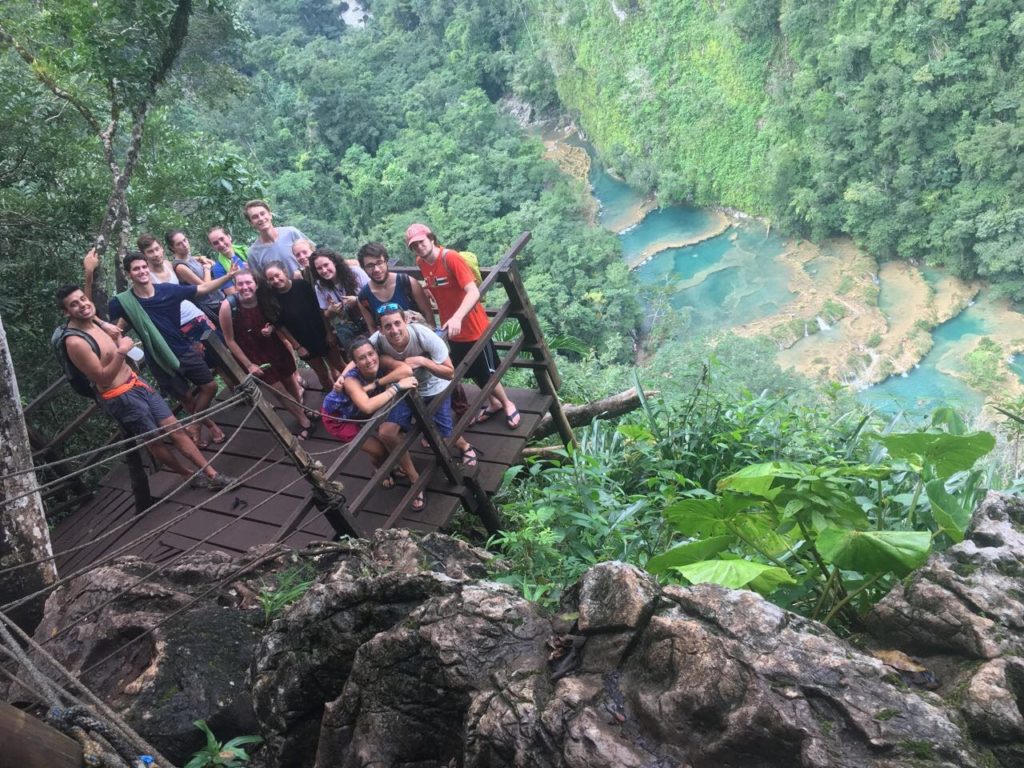 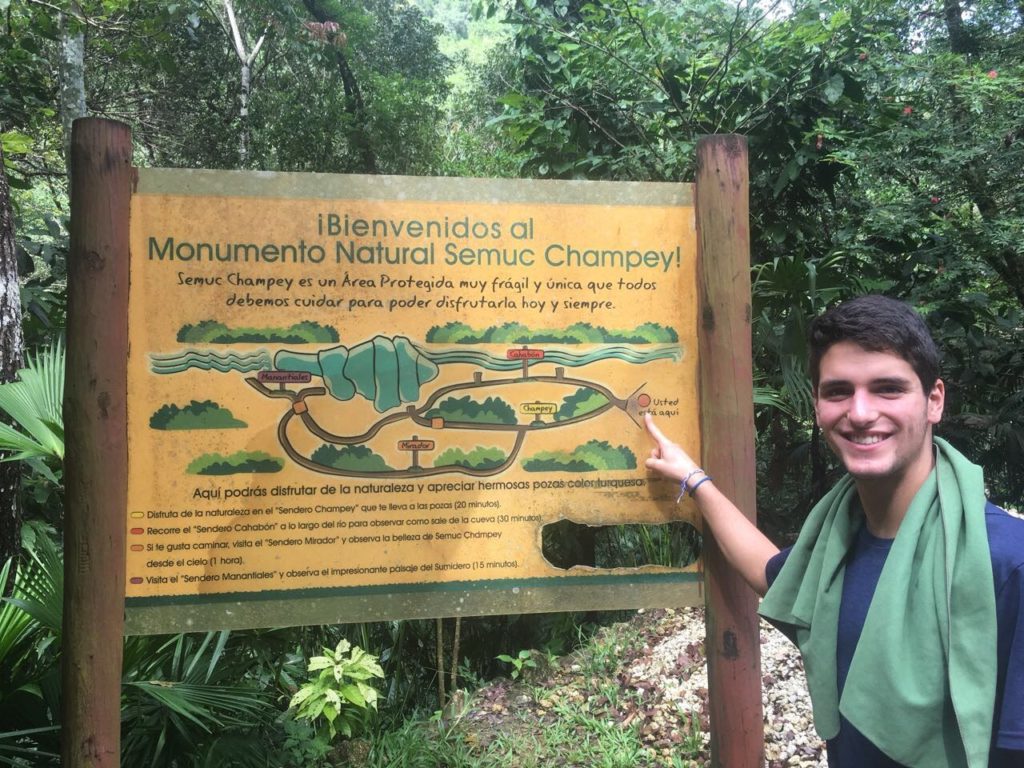 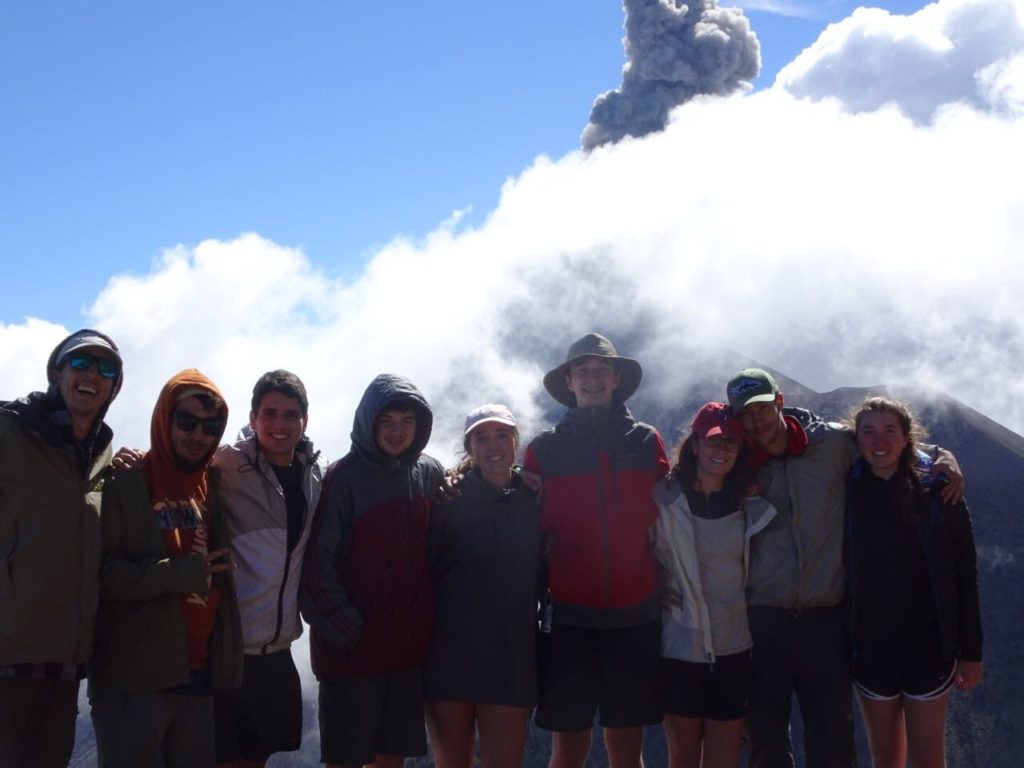 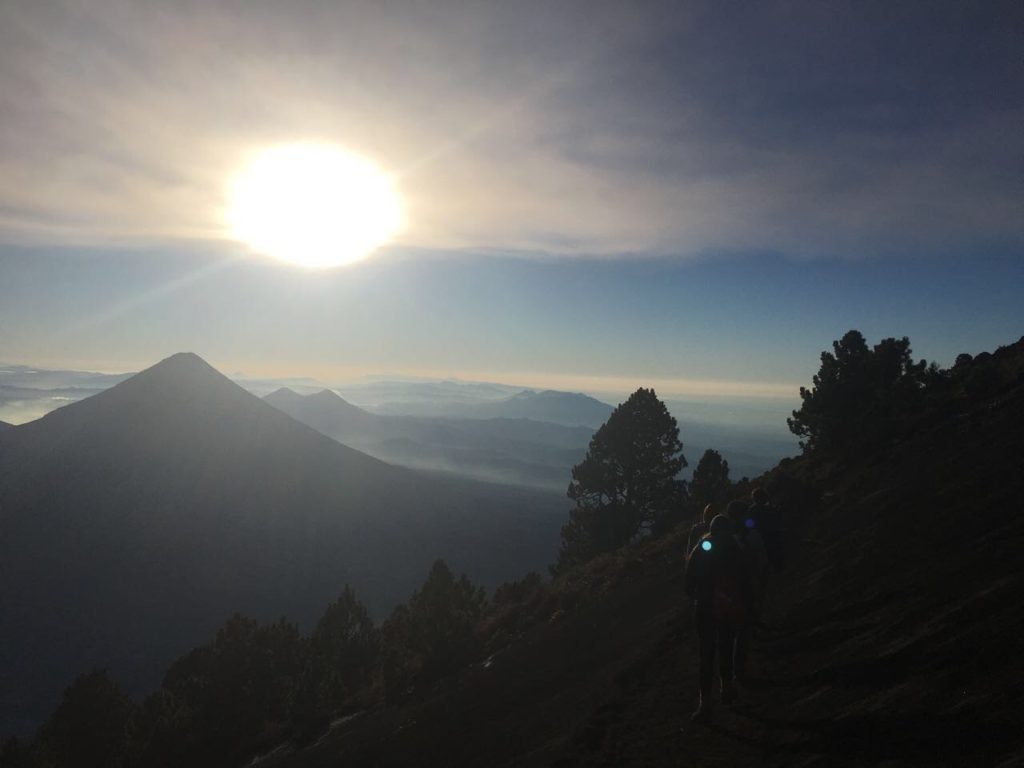 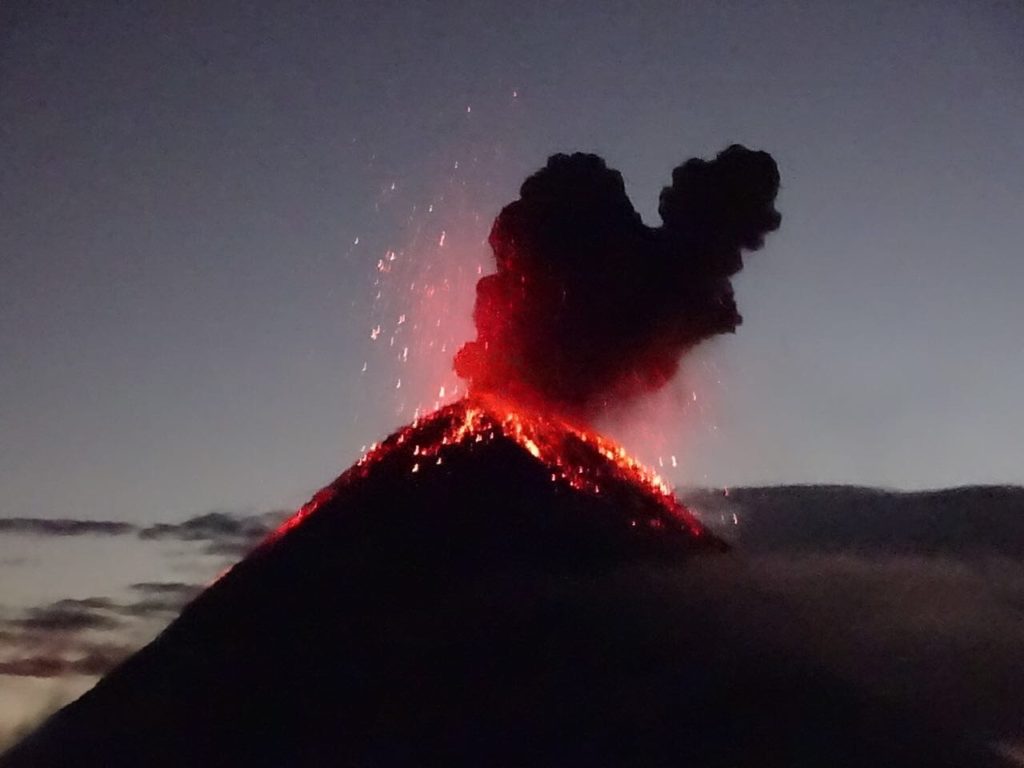 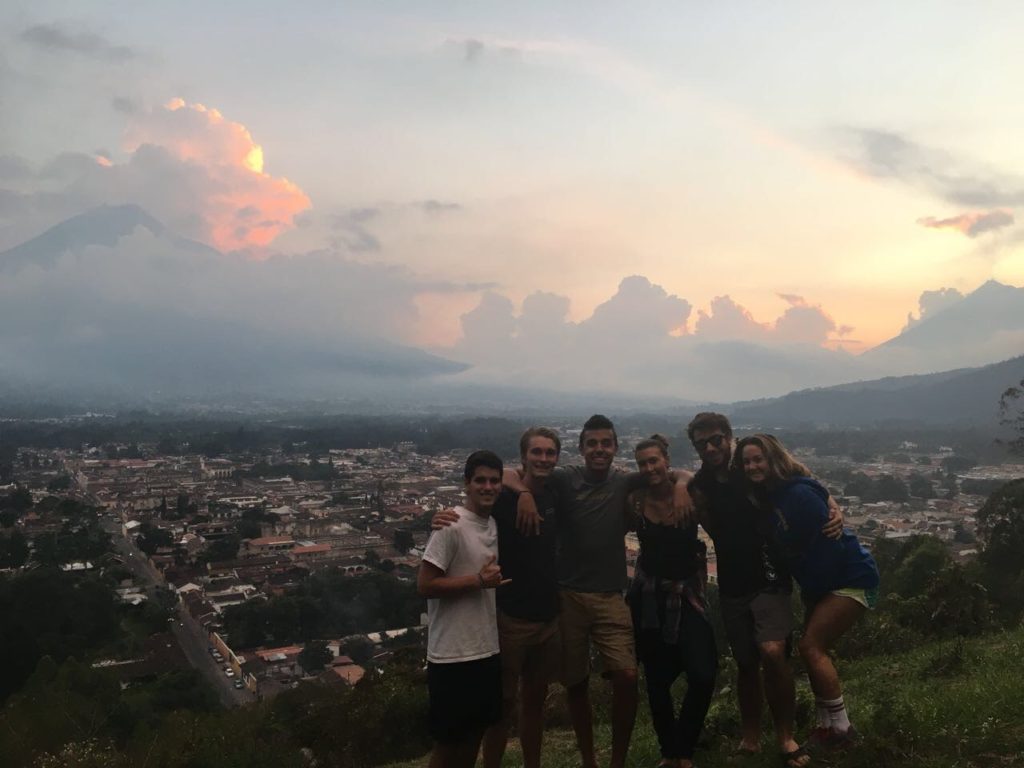 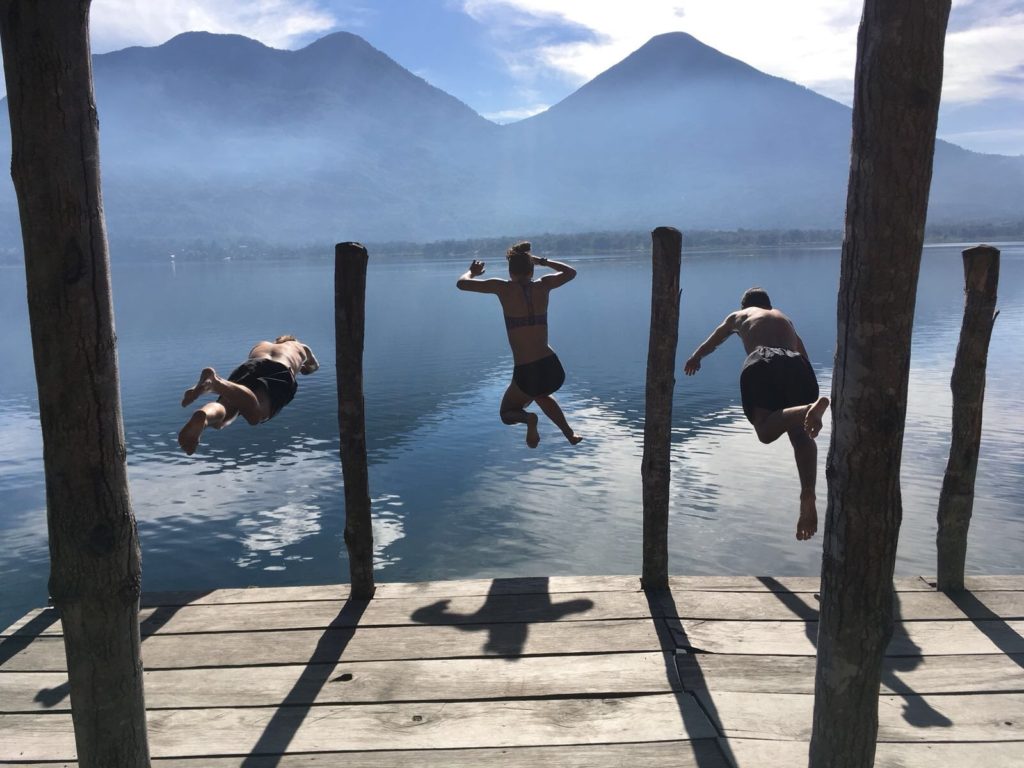 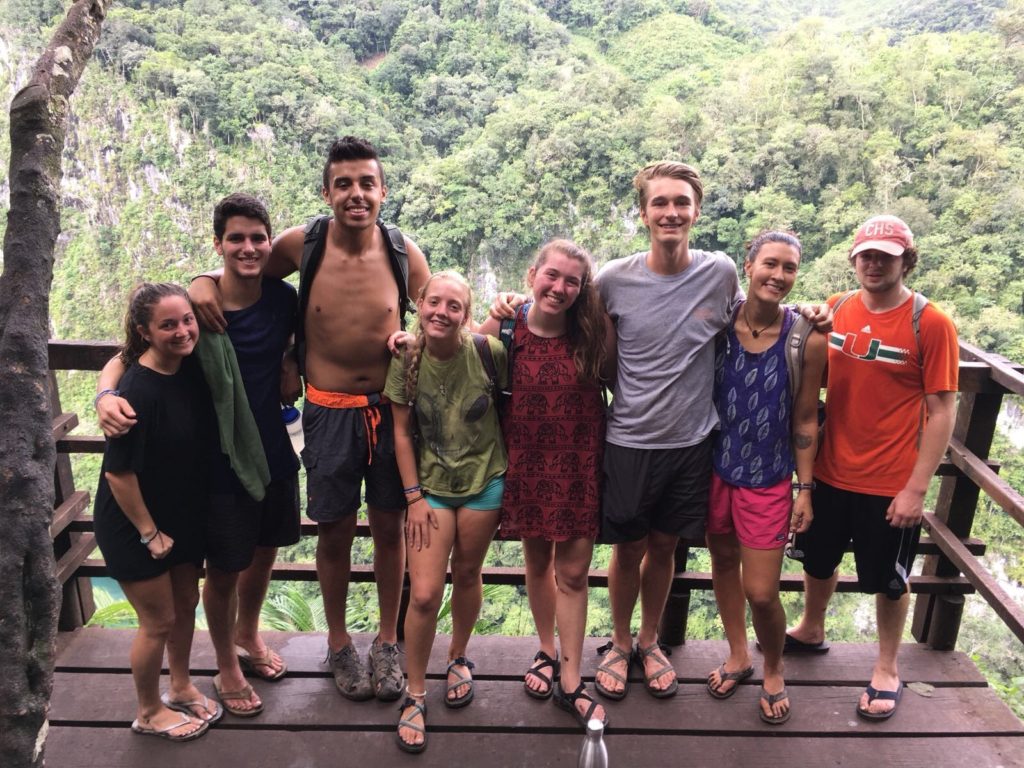 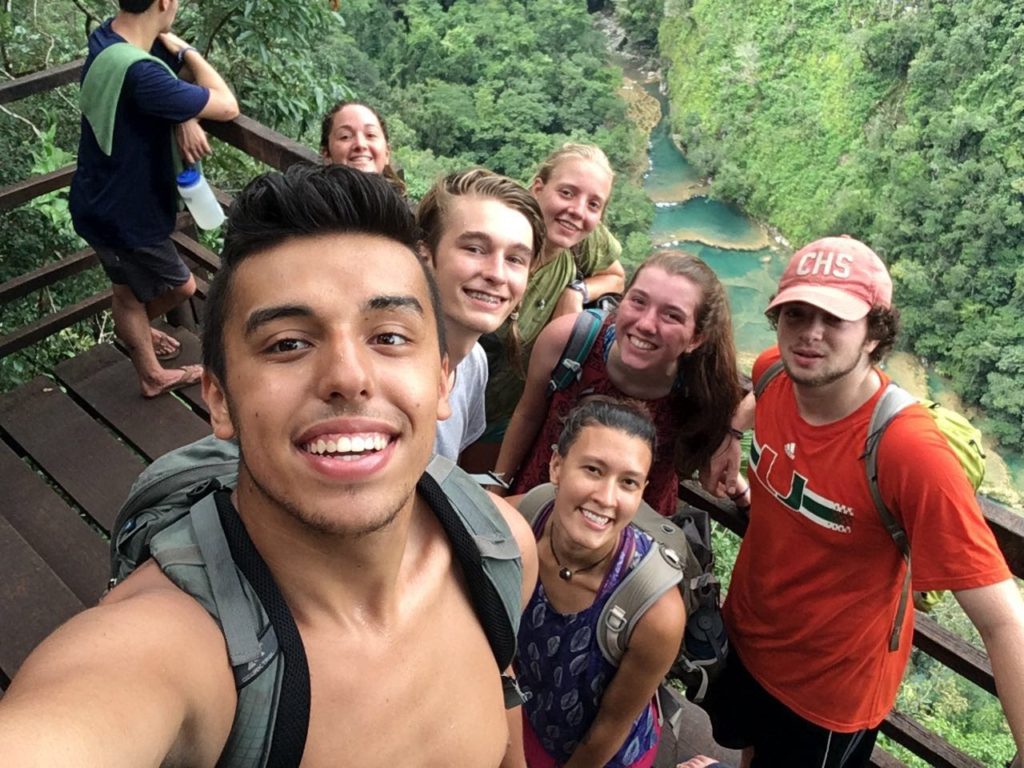 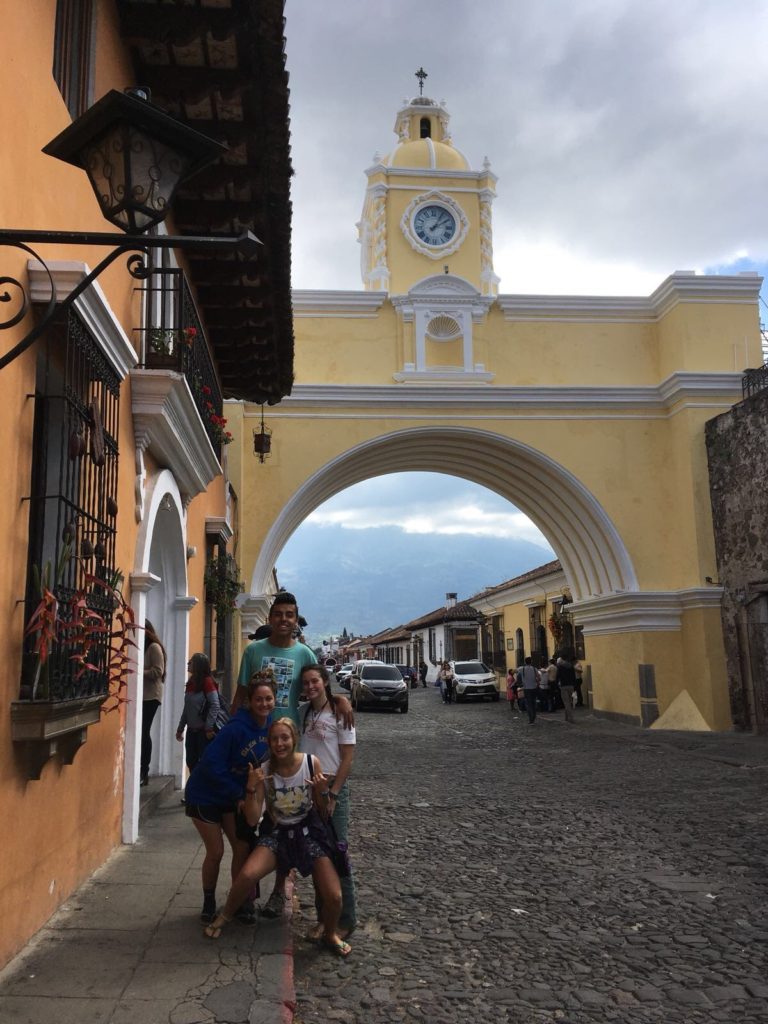