We were at a restaurant outside Bayamo, experiencing ‘Cuban time’: Two hours of waiting and still no food. I felt fine as I had eaten a breakfast fit for some tottering creature from the Jurassic period, but others weren’t so lucky. The stagnancy of the whole thing assured that a fair amount of voltage was coursing through our veins come meal time. We had yet to adjust to a pace we did not understand.

Bayamo again and I was looking up at a stadium light with an accessible ladder to the top. It beckoned to me, seduced me into climbing. And so I did. The tall, narrow pole swayed in the wind. I stood in the nest up there and reached down to grab my phone for a photo. But I fumbled, and my ‘celular’ plummeted the forty-or-so feet I had just finished scaling. I cursed all that is holy and descended the ladder to retrieve it. It was still operational when found, but with a screen so cracked it looked like tributaries of the Nile river viewed from the window of an airplane. I climbed again and this time withdrew my phone gently, carefully; taking the pictures I so desired.

Later I was awake before morning light in Viñales, and running toward the mouth of the national park. My neck was craned skyward all the while, gazing at the pre-dawn stars (which led to more than one uncomfortably intimate experience with speeding trucks). It was the darkest time of the 24-hour cycle right about then, and footsteps had to be placed with care. My distracted eyes were too busy with the stellar ceiling though, to be willing to work with my lower body; and my ankles bent in new ways. Soon, a slow blood-red creeped in from the West, silhouetting the palms and Mogotes as work-bound Cubans in beautiful old cars rolled past. A visual feast.

And then someone lying in bed with their dirty, bare feet resting on the wall – much to the dissatisfaction of our then-current casa host. We apologized for the marks it left and offered to help, but she only responded with death threats; making the first and last English words she spoke in our presence: “I kill you!”. This accompanied by the universally recognized blade-to-the-neck motion with her non-cleaning-supplies-holding-hand. A sweet woman.

Still in Viñales and over to the equine trench and up on some horses. No prerequisites, no classes, no gauntlet of waivers. A trusting country. Personal steed was a bit on the small side, but this did not effect its ability to pump the gas. After tight-quartered windings, an open stretch lay before us. I hollered and smacked and dug my spur-less heels in. Bounced with the gallop.

Found myself running in Las Terrazas a week later. Morning peaceful beyond compare except for the tumor-ridden stray which began a lusty pursuit of yours truly around KM 3. You better believe it made me run faster… nothing like the threat of bestiality to juice a man.

Then suddenly I was in Havana and the rain was not going to stop anytime soon. I left my cover and tried to hail a ride, but taxis weren’t having it. I resorted to sprinting the remaining mile home. Never truly understood ‘soaked to the bone’ until that moment. This wet dash delivered my long-suffering phone the watery coup-de-grace it had coming, and other valuables opted out as well. But what could be better than splashing along the Malecon, not a soul in sight?

And now Playa Larga: sitting under the shade of some vine-covered tree, watching the waves. I have thus far avoided any and all day-counting, but this is no longer possible. So few remain. 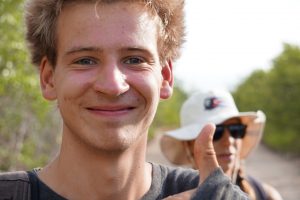