Dear family and friends of the 2018-Carpe-Diem-South-Pacific-Walkabout-group,

As you may or may not know this program assigns a role to every member each week; group leader, chef, logistics, etc. During this particular week, I have been tasked with updating the group’s blog with the goings on of the past few days. My specific title (as stated in our official Carpe Diem packet) is “Bilbo Bloggins,” and just in time for the start of our stay in NewZealand. Unfortunately, I have never written a blog post, so I will format this as an informal, open letter to you all. Please excuse all grammar/spelling/punctuation mistakes, and run on sentences going forward.

I will take a deep dive into our scuba experience in Fiji, but first; I’m going to share my observations and opinions of your loved ones, my fellow group members. Don’t worry, it will all be positive, light, and brief.

I’ll start with myself to provide some background. My name is David Chase, I hail from upstate New York, between Ithaca and Syracuse. I’m assuming everyone has seen pictures of the group. I’m the slim, tan one with brown hair that’s too long and probably facial fur depending on the photo. Its impossible to describe one’s own personality without coming off as either self-congratulating or self-deprecating, but I’ll do my best to leave bias out of the picture. I’m definitely the most laid back of the group, probably the funniest, and possibly the most arrogant. I’m almost always being sarcastic or making jokes (see the previous sentence). Also, I can come off as intelligent when I want to, and abrasive if I’m not mindful. I think of myself as a creative who thrives on anything artistic, blog posts included.

Moving on, we’ll go in alphabetical order by the first letter of first names, making Alexandra or “Alex” as she’s known and loved, first. Alex is the tall blonde girl, or woman as she’s almost twenty-one, in the photos. She is a fluorescent, social butterfly. One of the most boisterous, exuberant, personalities in the group, while remaining greatly sensitive and affectionate. Alex has made it her mission during the program, and I think in life as a whole, to affect everyone she comes across positively, leaving them with a warm glow.

Second is Diana, she’s much shorter than Alex, her hair is slightly darker, and she’s always in long sleeves and pants. Diana is quiet most of the time, which garners great respect from me. Some may not suspect it at first, but she is a comedic scorpion, waiting until the perfect time to make the funniest comment. My grandfather told me a quote once from a judge whom he respects greatly- “The longer I have with [a paper] the fewer words I use.” Diana embodies this piece of wisdom, bringing the group intelligence up greatly.

After Diana is Duncan. We, or I, started calling Duncan “Dunk” a few days into the program, just because it was easier and quicker. Never one to disappoint; the pale, blonde, 5’11” soccer player dunked a basketball at a public court in Sydney. Always one to rise to the occasion, Dunk is an outgoing extrovert who had everyone figured out on night one, back in Katoomba. He has possible futures in impersonations and music review, always catching giggles with his Cleveland impression or wowing us with obscure artist references.

Then there’s Elsa; she’s a little vertically challenged, but the size of her heart makes Yao Ming a midget. Elsa has been the designated cuddle buddy of the group since we started out. Her outbursts of laughter have been a big factor in maintaining morale during the more difficult days. Igniting these giggle-fits remains one of my favorite past-times. Elsa is a Care Bear in human form. Somehow she always knows if and when someone needs a hug, and constantly checks in with those in need.

Following Elsa is Emmaline, or Emma as she prefers. She can be picked out in pictures by her auburn hair, although she insists its brown. Emma is the youngest of the group, which you would never guess by listening to her, she’s one the most mature and level-headed of the group. Her smile is bright enough to light up any room or dark mood. She’s selflessly kind, always willing to share and is easy to talk to. Emma is incredibly humble, one of the very best traits one can have, in my not so humble opinion.

Next up is Jacob, or Jake as I decided early on. If Elsa is a human carebear, Jake is a human bear bear. From his size and stature, he’s the tallest and broadest, to his bear hugs, to his tendency to look after his own. I truly believe Jake to be the type of person who, if he’s with you, is with you 100%, 100% of the time. He brings enthusiasm, passion, and love into the group, in a way no one else can. Jake has been a sturdy tree for anyone who needs something to lean on during the trip, a friend who gives without asking in return.

Behind bear boy is Kathleen. She’s the one with all the long dark hair. Kathleen was “Kathleen” until we berated her with “Kathy” so many times she had no choice but except adapt to survive. There have been other nicknames like “Grandma” and “Gramma Kath.” I think it started because she looked after us all like a mom, but evolved to grandma for some reason. Kathleen presents herself as having a prickly outer shell but it just makes one feel all the more privileged when she shows her softer side.

Providing a pause in Americans is Kobbe. He provides so much more, though. An intelligent, considerate, compassionate, voice of reason. A seriously skilled hand which has fixed itself to the guitar. Do yourself a favor and give his band’s new EP a listen through, the band is called 1pm. One of my favorite experiences on the trip so far was drawing in my sketch pad while listening to Kobbe play guitar in the bunk across from me. I guess you can’t see his accent in the pictures, so he’s the one in jeans and a Waldo sweater.

Resuming our American ensemble is Maximus, Maximillion, or Mad Max. It makes no difference, he’s Max to us all. On day one, I mean at the airport, this fit looking, dark-haired kid walks up to the group that had already amassed on the floor just inside the international terminal at LAX and introduced himself. He told us he had arrived early so he could explore LA ahead of time. That is Max; ready to go, always prepared, and willing to bend with the flow. More than that, he’s kind, fun-loving and loyal to a fault.

Last but not even slightly least is Shelby. She’s the pale, dark-haired one, that a little girl at Sheoak nominated “the pretty one.” Shelby and I share in an eye roll when Jake is playing his music for all to hear. She’s a brilliant storyteller, with a contagious laugh. Shelby’s coy smile makes others want to grin with her, for support, and then keep on smiling. She can be quiet and cautious, or vocal and engaging. Shelby is the first, or at least third, to dance when a song she knows comes on, which inspires all to follow suit.

I thought to leave our Overseas Educators out of this list, as their biographies are already on this site, and I meant this mainly for friends and family reading to hear how their loved ones are fairing, but it dawns on me now that Peter and Anya’s friends and family may also read with similar intentions. Also, the biographies provided aren’t written by me.

So I Introduce Anya. During our stay at the resort in Fiji, there were some goats nearby. Anya and I went over to say hi to the benevolent bovine. I watched her interaction with an adolescent goat in quite an awe. She was so loving and gentle with the kid, speaking softly to it, I understood why we had all been looked after so well during the trip. It was clear then that Anya puts the same time, energy, and devotion into all things she begins. We are incredibly lucky to have her as our shepherd.

Anya’s partner in this time is Peter. Peter, Pete, or Petey is constantly trying to amuse or educate the group and rarely fails. He spoon fed a car full of us a podcast on the Mexican border until we were asking for more. He persisted with his goofy-type humor through my straight-faced-raised-eyebrow-stares, and now I can’t wait to chuckle at whatever he comes up with next. Despite being slightly trampled on for stooping to our level, Pete is respected and loved by all.

I could write more about everyone, but with our days brimming with new experiences and activities, there’s no time to do so. Even these few lines have taken all of my available time. So the deep dive I promised about our time under Fiji’s beautiful blue sea has been reduced to a shallow swim. Basically, we are all now certified Scuba Divers, with licenses, besides Kobbe and Elsa who both opted to sit out for various reasons, and Alex who got a modified version for skipping a day due to sickness. Nobody got eaten by sharks, although we did swim with some. And nobody blew up from the pressure, although there were a few bloody noses. All in all an amazing final week in Fiji. 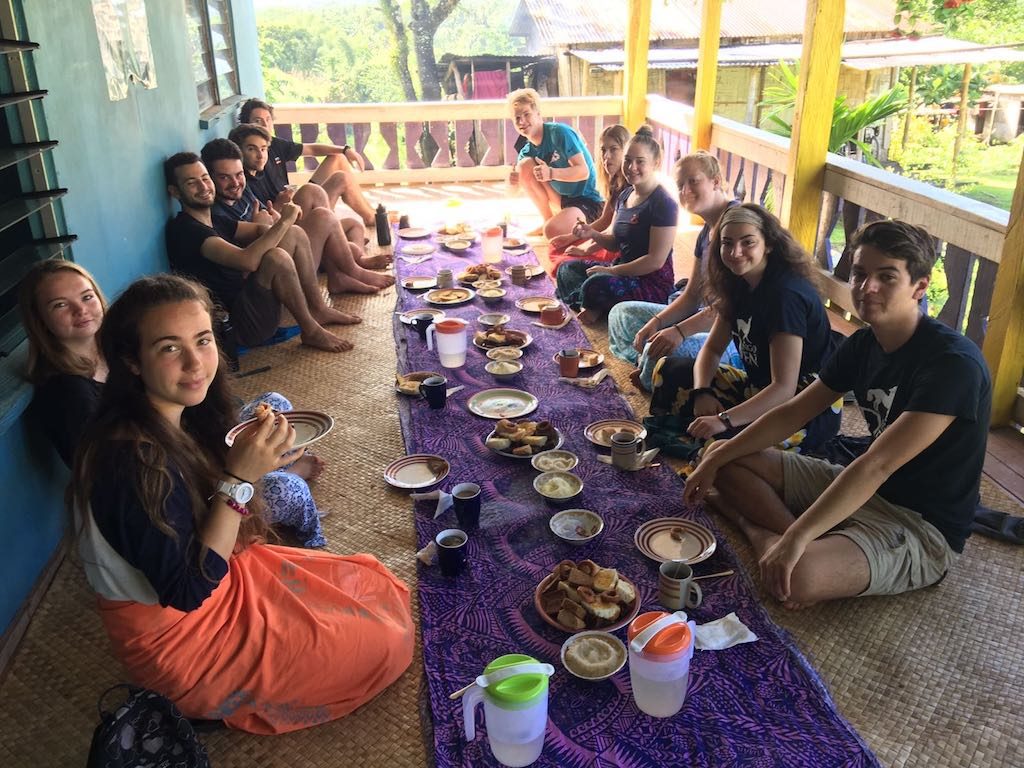 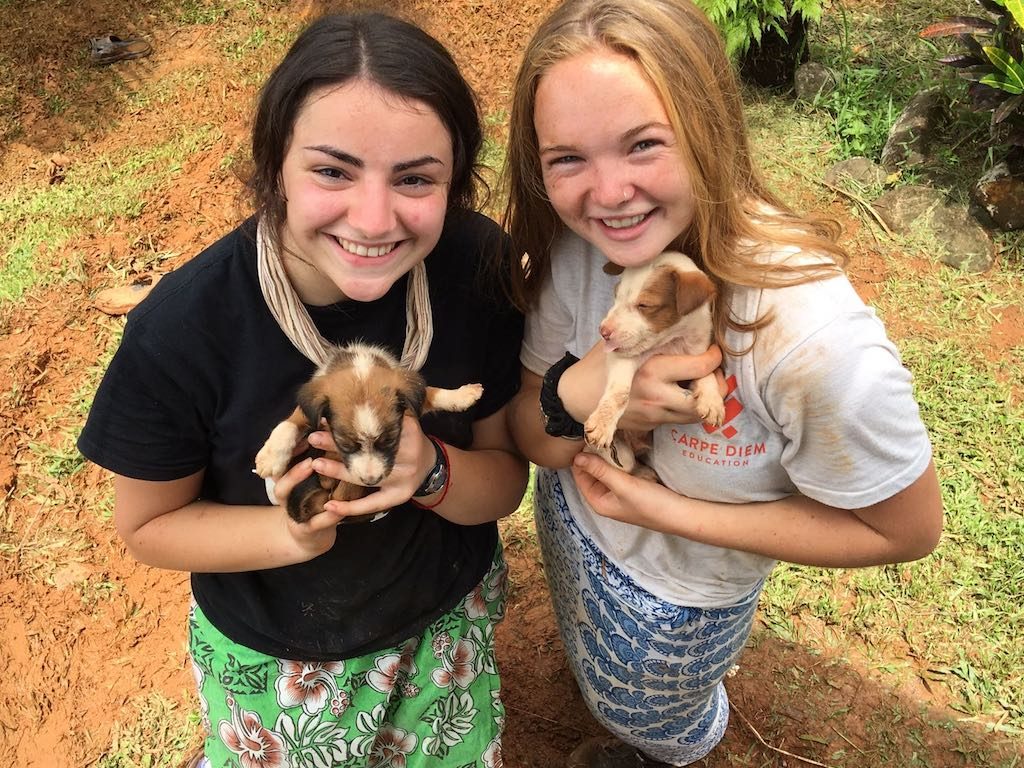 Hanging out with some village pups! 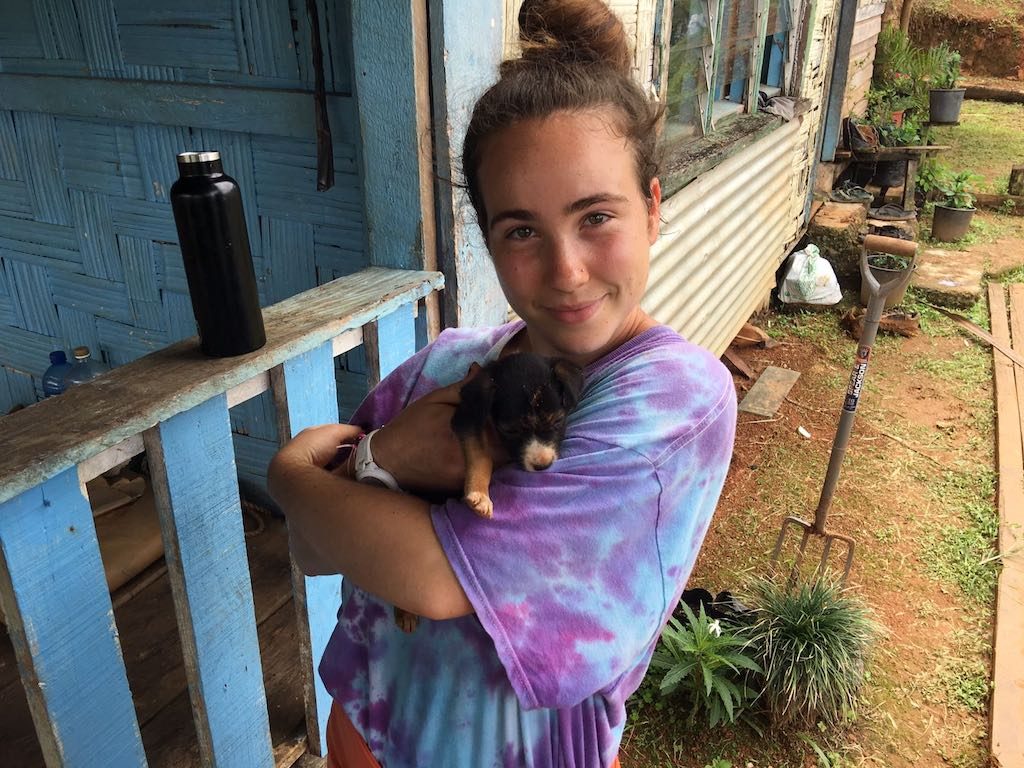 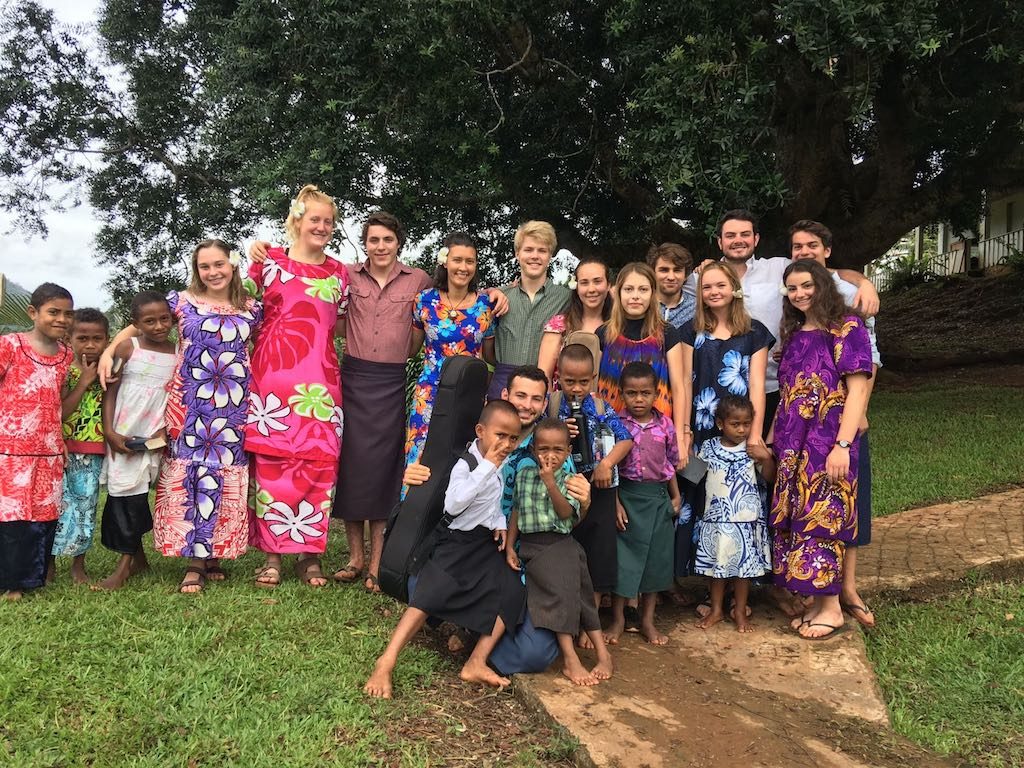 Our families lent us some fancier attire to dress up for Church on Sunday. 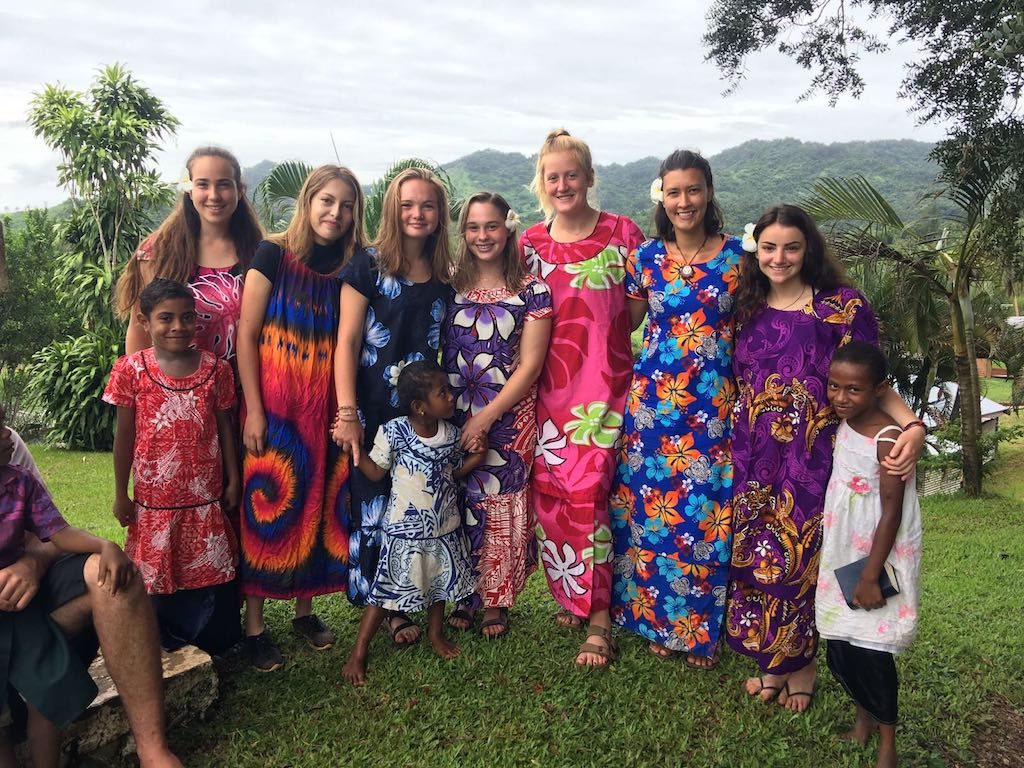 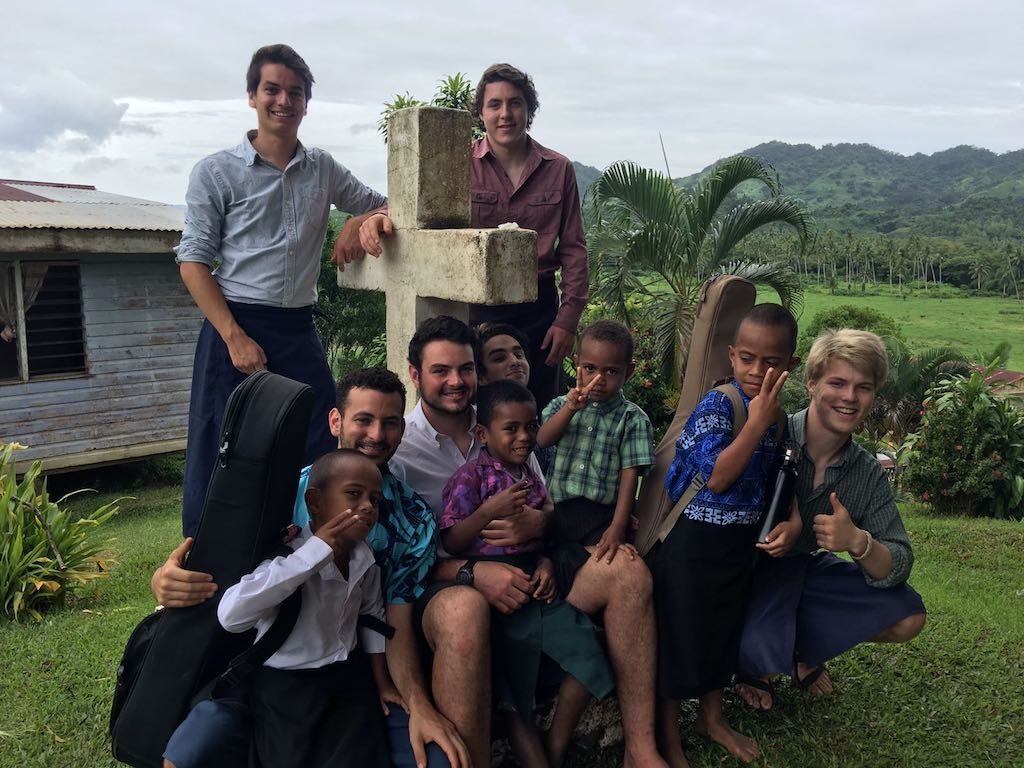 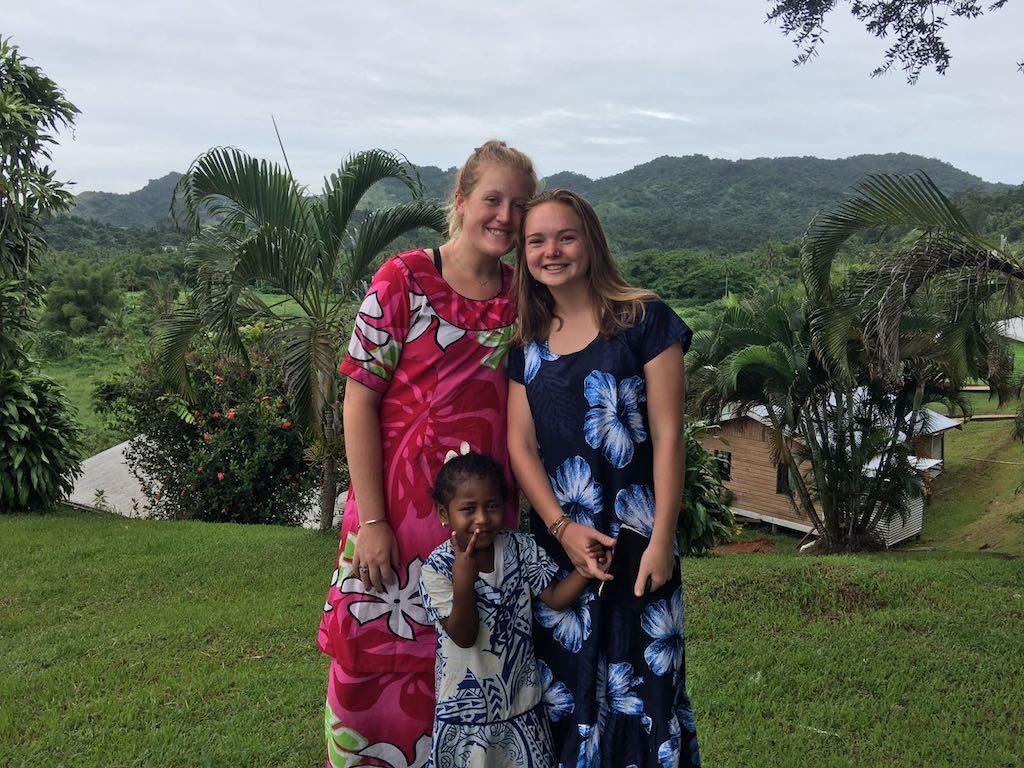 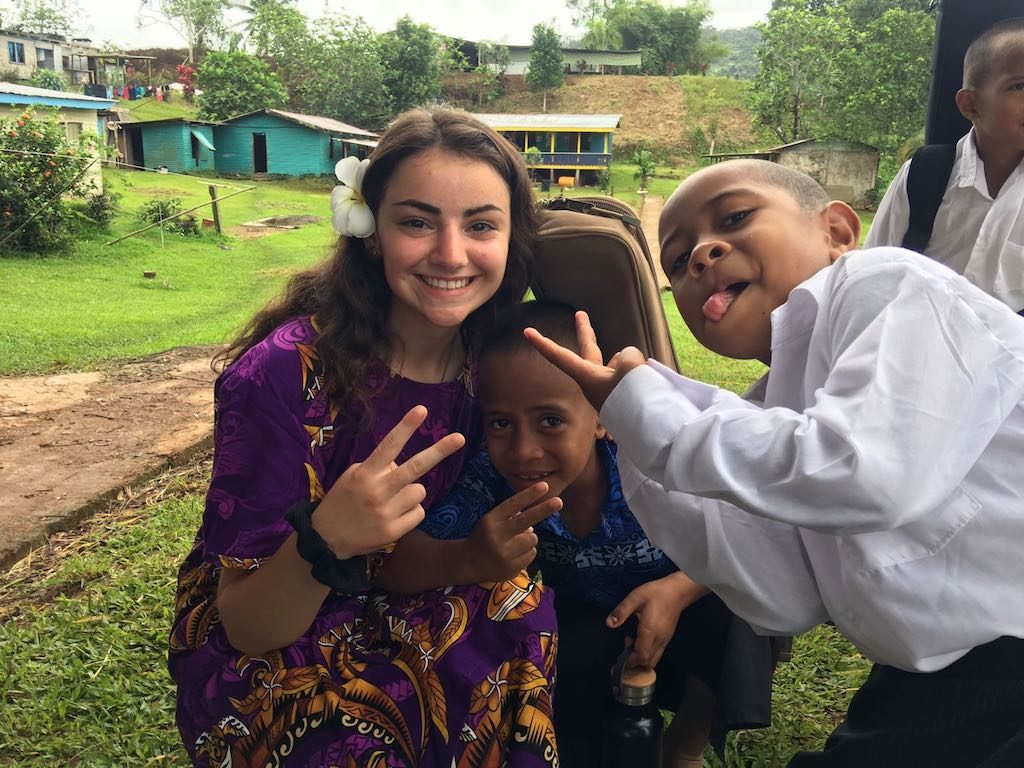 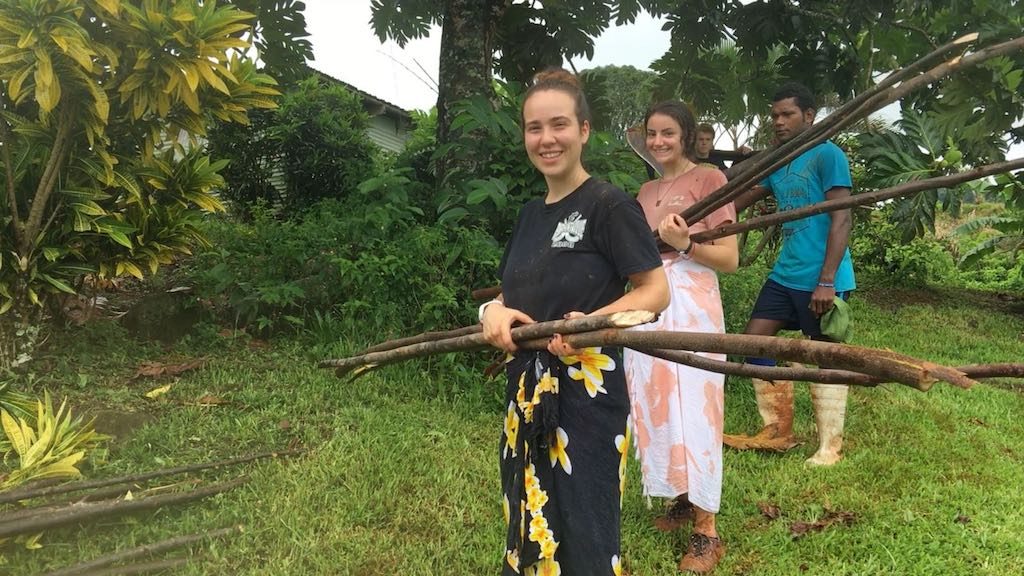 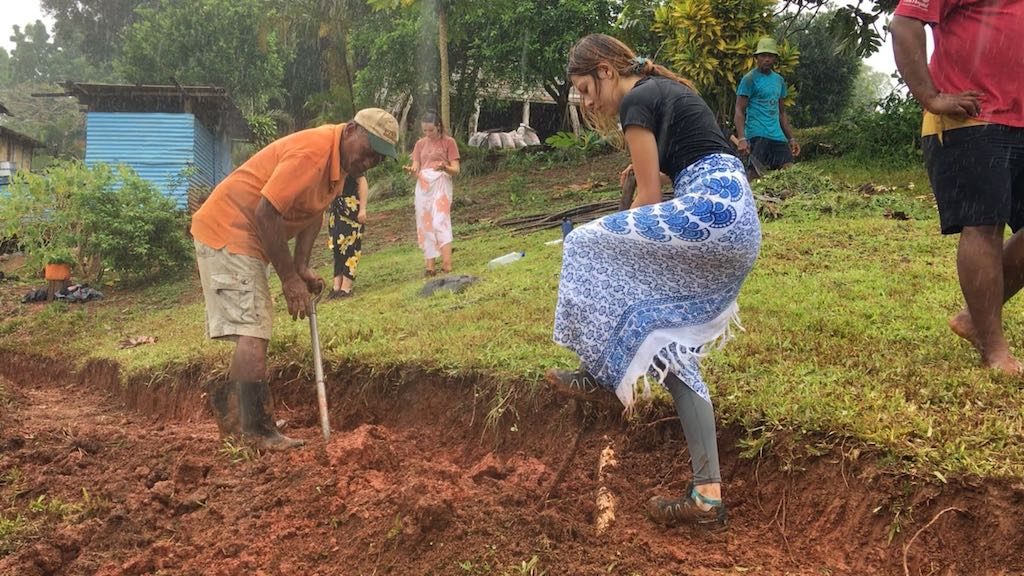 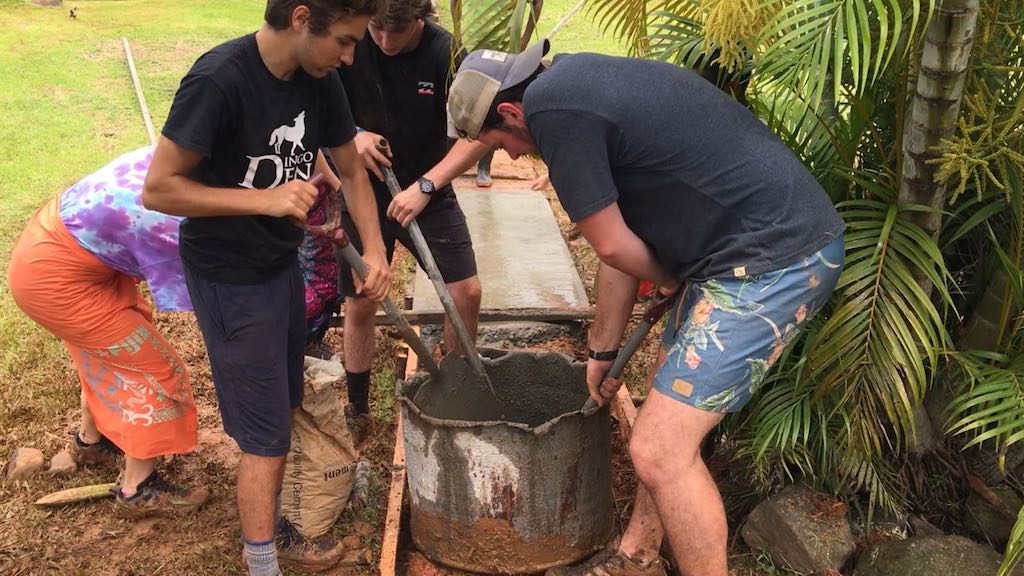 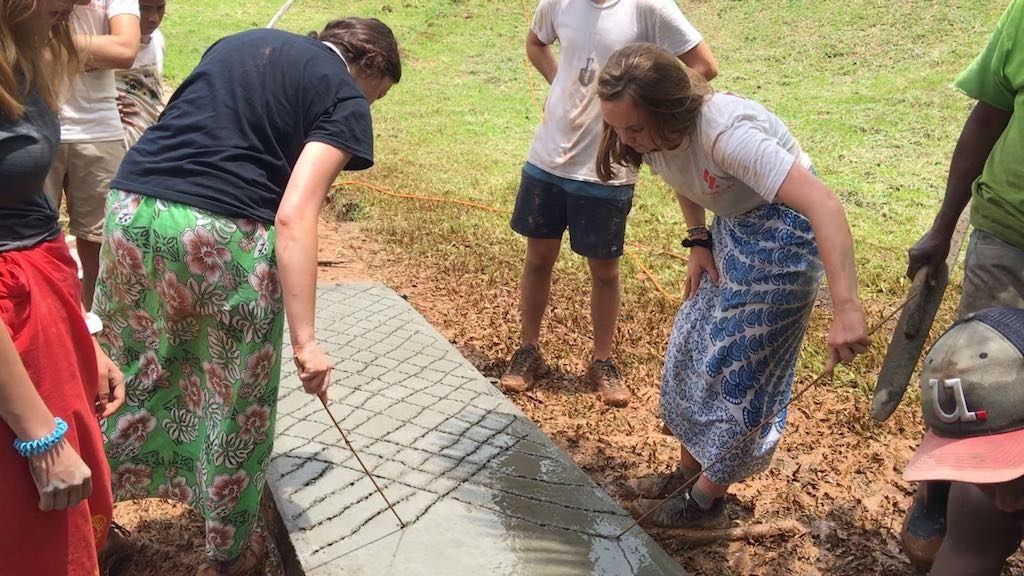