David’s Vignette, Amanda’s Cuentito, and a farewell to Cuba at the airport in Cienfuegos

A long, gorgeous Sunday afternoon walk through the Playa and Miramar neighborhoods of Havana. Looking for a meal, Amanda and I come upon two very different establishments on opposing sides of the street. An open, haphazardly arranged Cafeteria (national currency) on the right, and a closed off, posh CUC (“tourist” currency) place on the left. We opt for the CUC joint, in the mood to splurge a bit. Outside our CUC confines, folks are drinking, carousing by the sea. An old, fat woman approaches the fence, and matter-of-factly, without expression or emotion, addresses me, “Papito, dame algo” (“Hey buddy, give me something”). She comes around to the entrance, repeats her request. As one of the waiters moves toward her, she says, “I’m going away, and I’m not coming back, so don’t call the police.” There were plenty of other people eating at the restaurant, but no other white men.

This moment captures well the bizarre effect of Cuba’s current two currency system, and how it’s been gradually reintroducing “haves” and “have-nots” to Cuban society— cracks in the base of socialism. Walking the streets, at times I’d feel a self-conscious discomfort of being a “have”, a throbbing beacon of wealth. The divide between these two restaurants was a perfect symbol—we’ve explored these two worlds, choosing at times the simple, dollar sandwich joints, at others the 10 dollar per plate private restaurants. Carrying both currencies has granted us access to both realms, and insights into different aspects of Cuban identity.

I keep this and similar moments as reminders, among all the memories of Cuban warmth and remarkably tight community, of a quiet longing to have a bit more.

After these three dynamic months of travel, I have countless moments of wonder to appreciate. The time spent in conversation with Cuban people in various contexts, whether in the homes we’ve been welcomed to stay in, at food stands, in busses, with project partners, or someone met in passing on the street— these have been among the most precious, perhaps especially so given the current political context of US-Cuban relations. Upon learning I am from the United States, many Cubans have smiled kindly and offered a reminder to me that we are, after all, neighbors. Indeed, from the malecón (waterfront) in Havana, it’s wild to imagine the coast of Florida just 90 miles away, and yet how distant these lands can feel. It has been clear that Cuban peoplewell, at least what seems like a good portion of them- are relieved to have relations beginning on a path of restoration, and each positive interaction we have as a group seems like a small contribution to that restoration.

Given all this, I felt particularly contemplative when wandering around central Havana and coming upon Parque de la Fraternidad, a green space beyond the capitol building which has a sacred ceiba tree at its center. We had beheld several majestic ceiba trees along our journeys across Cuba, so it felt good to see another one in the heart of the capitol. Circling the ceiba tree is a fence that bears a quote by José Martí, a central figure to Cuba’s revolutionary spirit; it reads: “It is time to gather and march together united, we must go forward as compact as the silver in the depths of the Andes. People unite only through bonds of friendship, fraternity and love.”

As I slowly walked around this tree, reading Martí’s words, a man approached me to ask if I’m from Israel; something about my facial features had him convinced this was the case. I assured him otherwise, and then we shifted into conversation about the tree. He told me that every Latin American country had brought soil from their land to combine at the base of the ceiba. We also discussed Fidel’s revolution, which this man didn’t agree with much, and I asked questions based on the cumulative understanding I’d pieced together from conversations before. In all the complex layers that separate my opinions, and sets of experiences, from that of this man…well, it doesn’t exactly feel like silver, yet at the same time, there’s a peculiar glimmer to the memory. I suppose the glimmer is a celebration of the triumph of respectful and curious intercultural exchange despite all the forces that would otherwise act to prevent it. In this, I’m grateful to our Carpe Diem Cuba 2017 family and all our Cuban hosts and guides for being open to the alighting of friendships that help sturdy the mountains we all look to for direction and inspiration.

The group is off! I just received word from David and Amanda, everyone got through security at the airport without a hitch and the flight (so far as we can tell on-line) will be landing in Miami in 30 minutes!

While I have only had the joy of supporting the group, the leaders, our friends, contacts, partners in country and of course all of you reading this in the final weeks – it has been incredible to bear witness to all that has transpired in that time. Thank you to everyone and I hope you find your own depth of connection and experience as the journey continues to unfold back in Los Estados Unidos.
– Drew 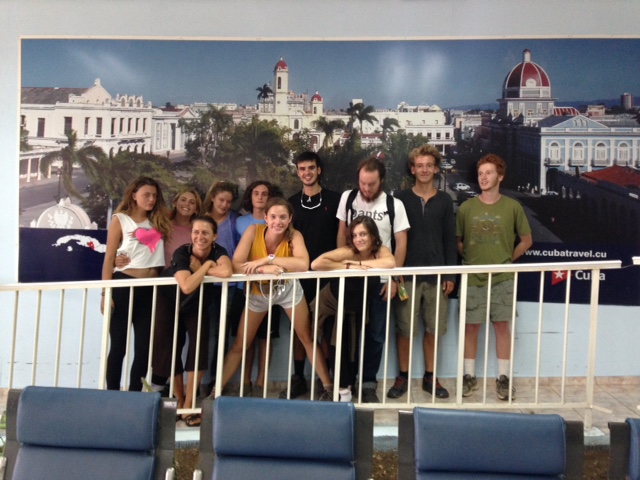