Our time at Dharmalaya was a good one. All the staff, architecture students, and workers were kind, patient and knowledgeable. We learned a lot across a myriad of subjects – from brick-making to vegan cooking and meditation.

Meditation was an important part of our time at Dharmalaya. We spent thirty minutes meditating every morning and on some days another half hour before bed. We learned many techniques from sound meditation to compassion meditation. It was a valuable experience for those who were experienced with meditation and those who were just getting started.

On some nights in place of meditation we had discussion or watched films. Our conversations covered topics like compassion, food, and sustainability, as well as a variety of other subjects. These topics proved highly enjoyable and informative.

Brick and plaster making were other important parts of our time at Dharmalaya. We made eco-friendly adobe mud bricks from soil. The process was simple if time consuming and dirty. First dirt was dug and topsoil removed. Then rocks were strained out. Next water was added and the mud was pugged. Pugging was a process in which we walked around in the mud until it reached a proper consistency. After several puggings the mud was put into wooden molds. The bricks were given a frog (a mark unique to its maker) then left to bake in the sun. The process of making plaster was similar to making bricks but it was an expedited process. The final layer of plaster was made using cow dung. This didn’t smell as bad as one might expect.

We made a slate mosaic on a ferrocrete water tank. Concrete was used to bond the slate to the tank. Overall this process was made more complicated by the fact that slate doesn’t like bonding onto concrete. In the end the mosaic came out well and depicted a sun and a wave pattern.

The only downside to our time at Dharmalaya was the bed bugs that traveled from the golden temple to the mountains. It resulted in mass chaos and hysteria. Only cleansing flames would extinguish the threat. All clothes had to be boiled or left in the sun. The bugs spread with great speed and only Matt, Atticus, Max ,Sabrina, and Celeste were spared the epidemic. The threat should be ended… but we’ll want to be cautious for a while and when we come home… 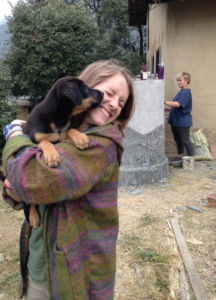 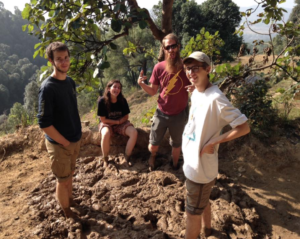