My time in Spain was spent either at my language school, cooking school or tasting the numerous delicious foods around my city -Bilbao.  Spanish cuisine is Morrocan cuisine with a touch of France and a splash of the big bad ocean. Spanish food can’t truly be understood without understanding the history of Spain. So much of the influence in their dishes comes from the Moorish occupation of the country that took place for 800 years. Without this period in Spanish history there would not be dishes like Paella, a rice dish everyone unequivocally known as uniquely Spanish, but comes “straight from the Moors, as does the use of saffron, cinnamon, and nutmeg”(History of Spanish Food). Gazpacho? Straight from the Moors as well. The Spaniards’ relation to food is a long and complex one and is influenced by many other cultures.

Spain’s location on the Iberian Peninsula has made it privy to having a cuisine that is extremely unique drawing on a close proximity to Morocco and a border with France. This lends to a blend of seafood, pastries, rice dishes, egg and potato dishes, salads, soups and more. Food culture not only affects everyday life in Spain, but language, economy and social structures as well. For the Spanish, food “is a source of pride, a way to live; it is central to [their] identity”(Durántez). Food is not only tied to the identity of the nation but the identity of the people who inhabit it. The food I was lucky enough to grace my tongue with in Spain was delectable. Even the bar food was little shy of amazing. This is not however my experience in America. I find you need to be particular about where and what you choose to eat because it is often quantity not quality.  While I traveled throughout the Andalusia region on my group semester, I spent my time in Basque country for my FVP. I mentioned before that in Spain food is a source of pride, this is especially true when it comes to regional food. The Spanish believe that “nobody cooks [the] dishes better than in the region where they come from”(Durántez). In the north (Basque, where I was) they tell me they have the best ham with the most nuanced flavors. And in the south (Andalusia) they tell me their ham is the best in the whole country. Who should be believed? I must say I am now biased toward the opinions of the Basque after spending time there. On occasion, I have found myself defending the honor of their ham. Long story short the Spanish food pride is highly contagious and not unwarranted. 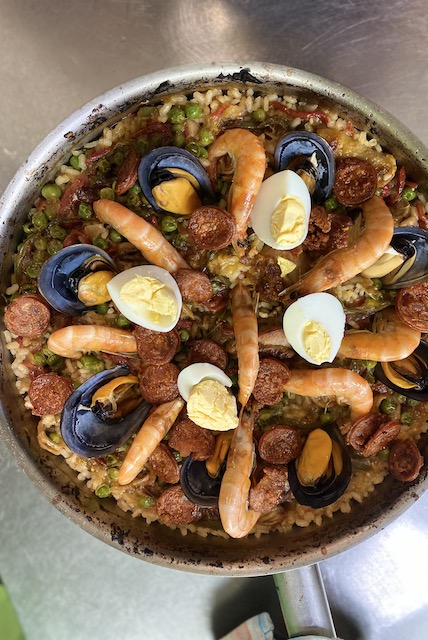 "I felt like by doing an overseas program, it was