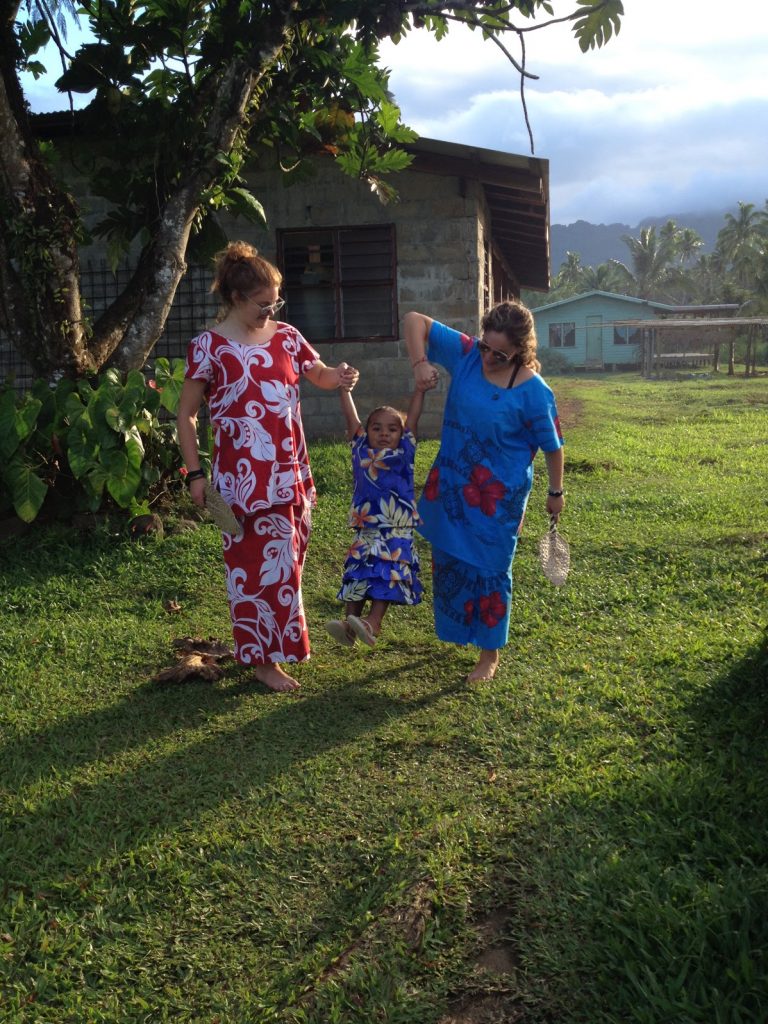 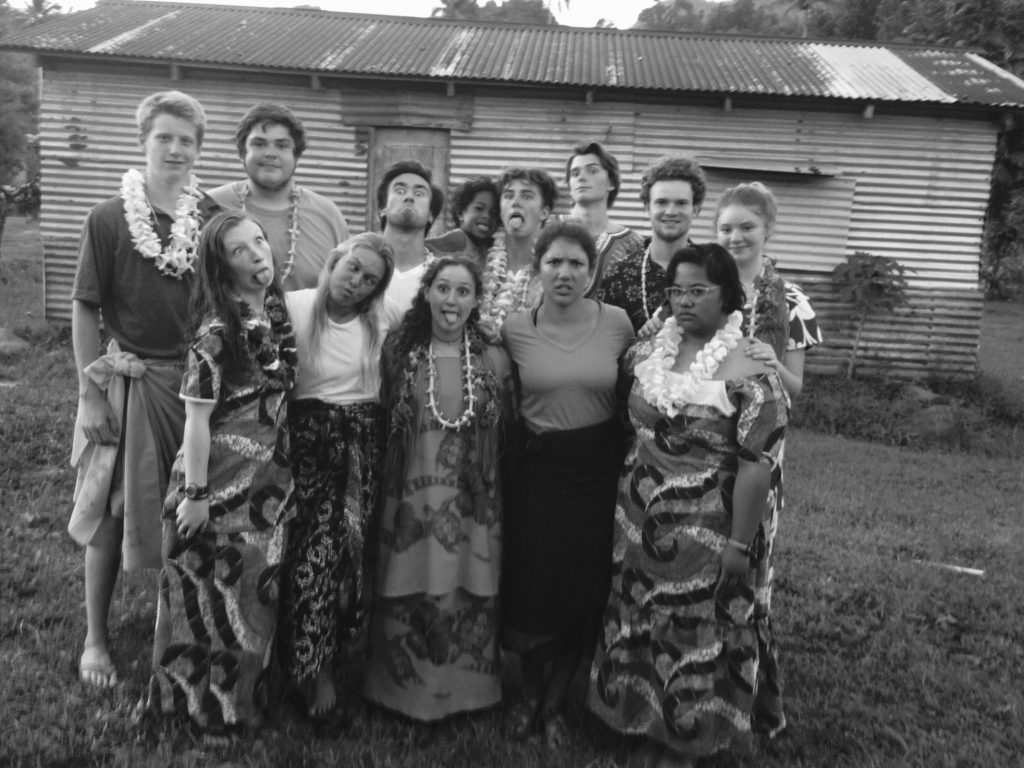 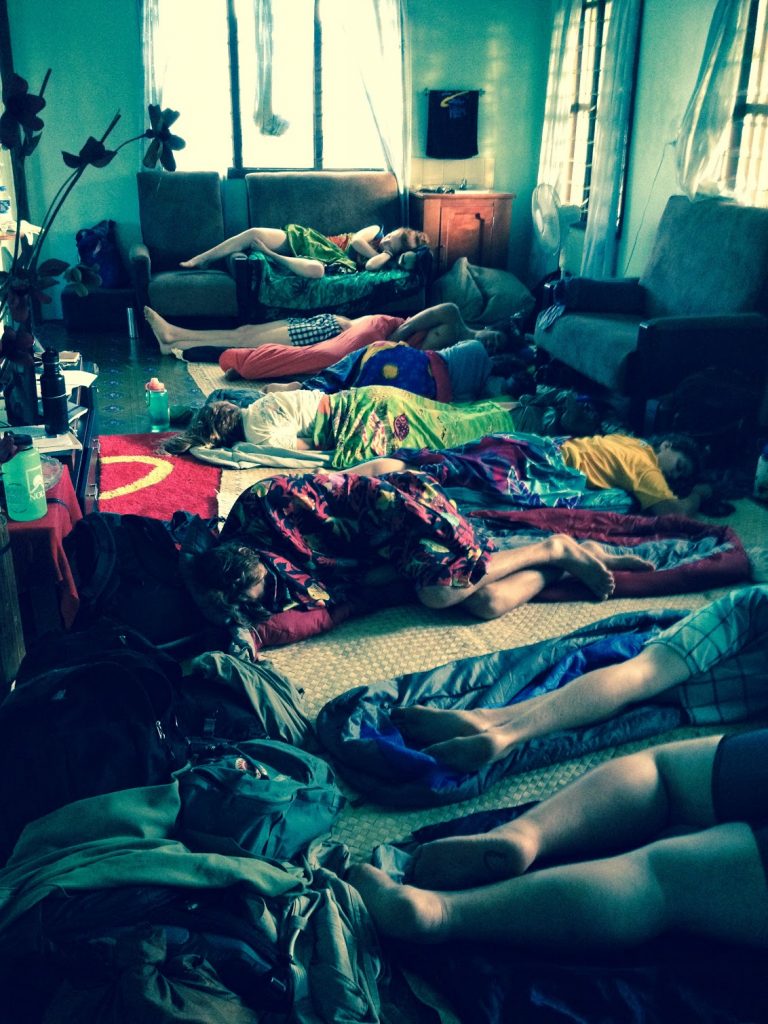 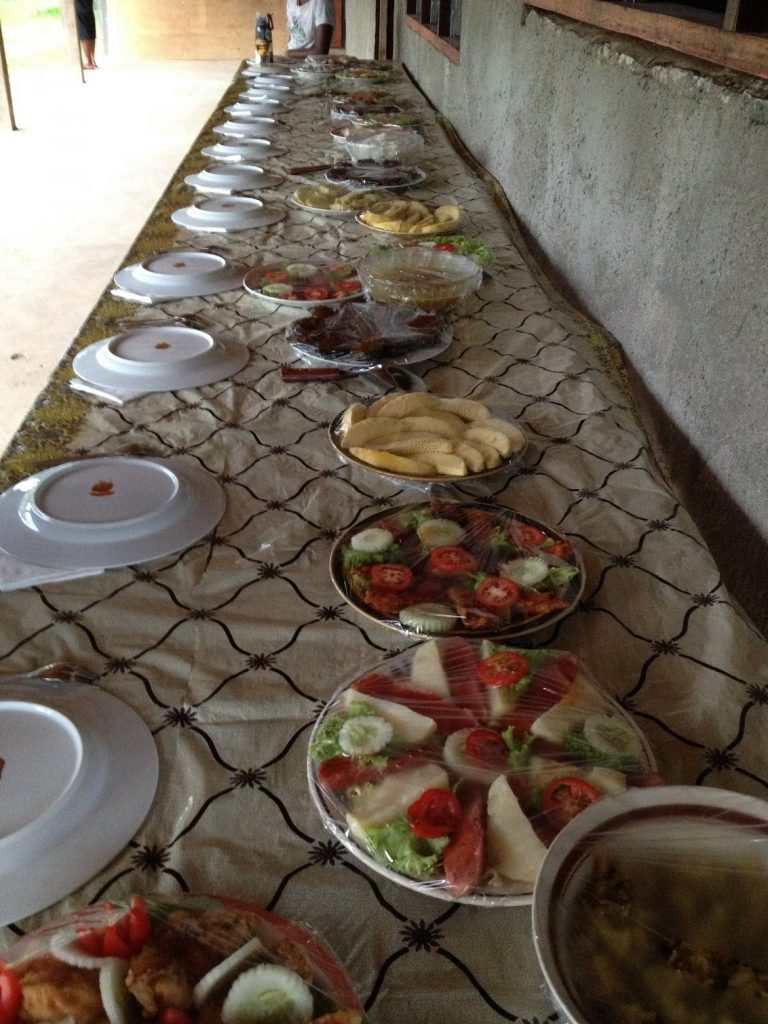 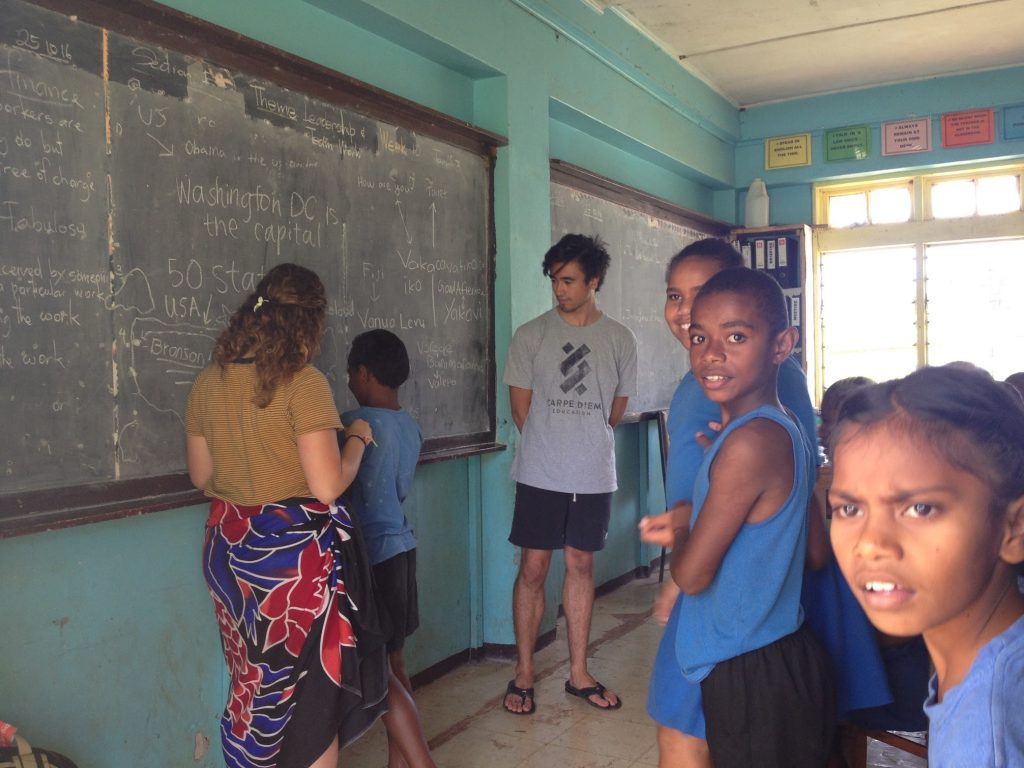 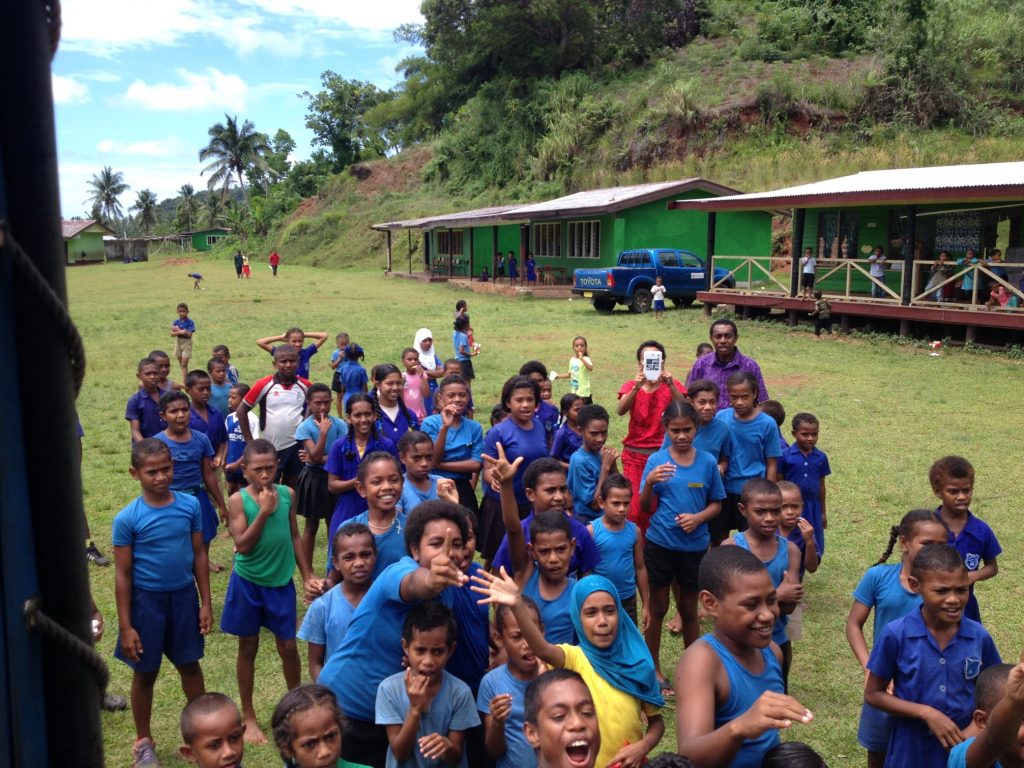 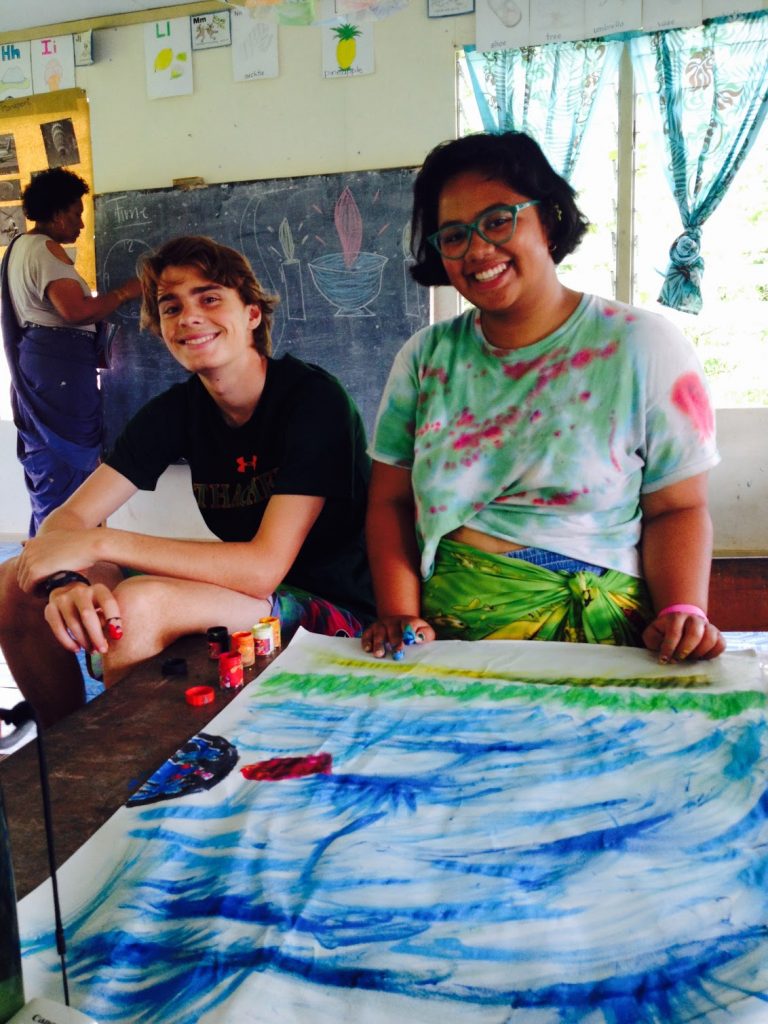 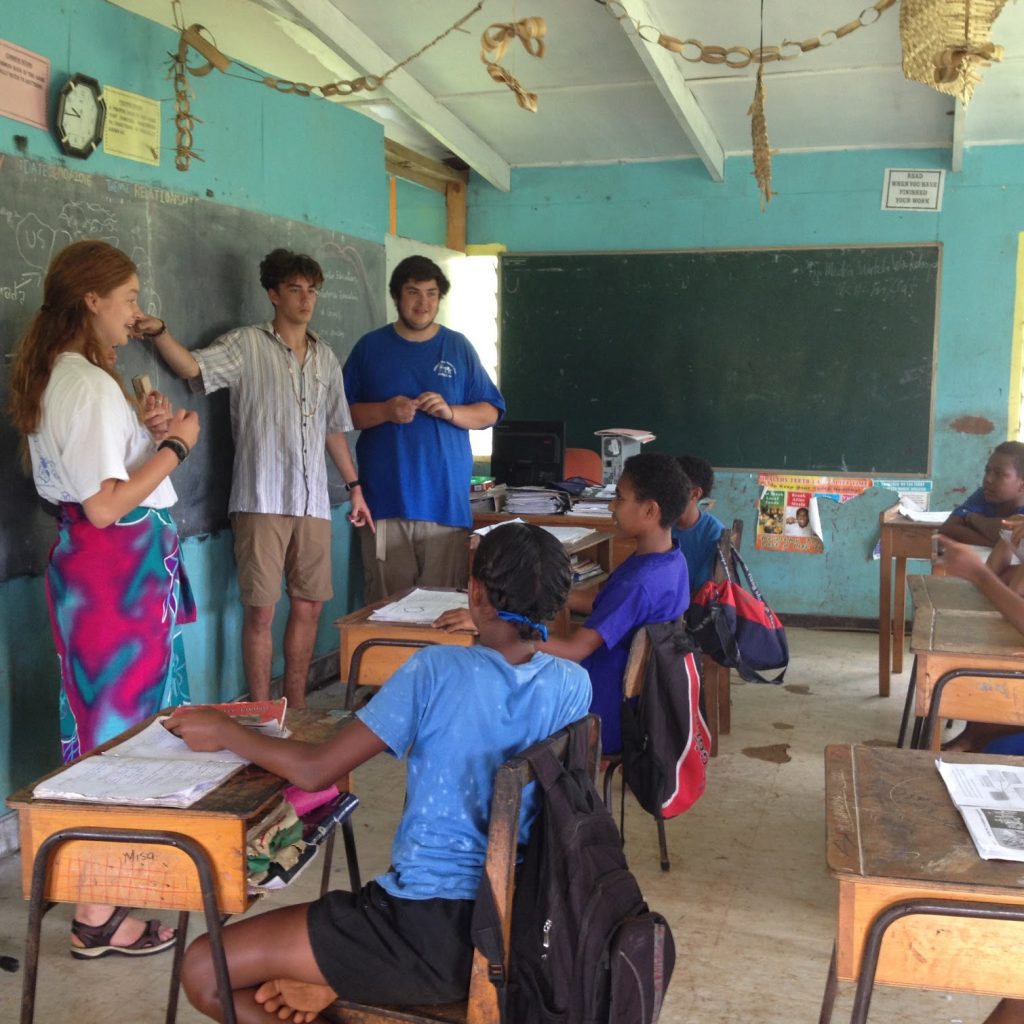 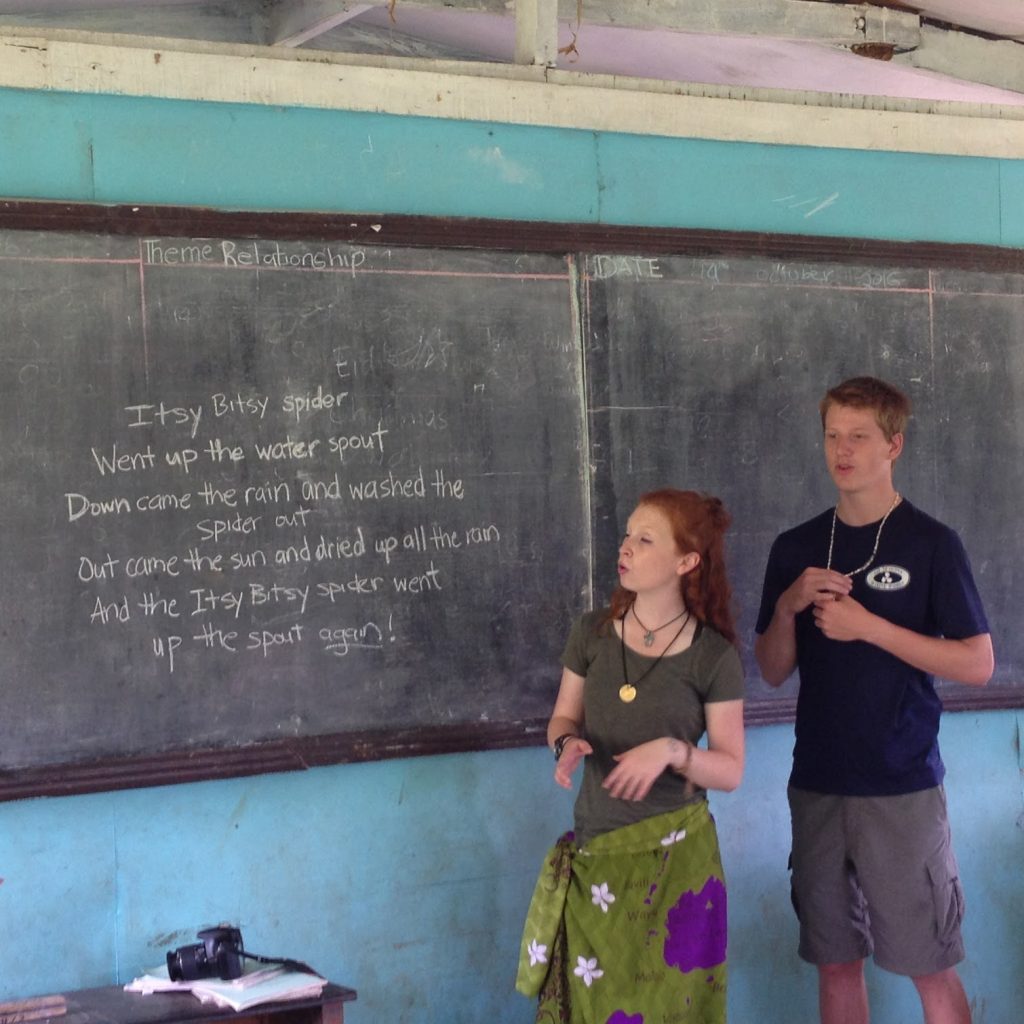 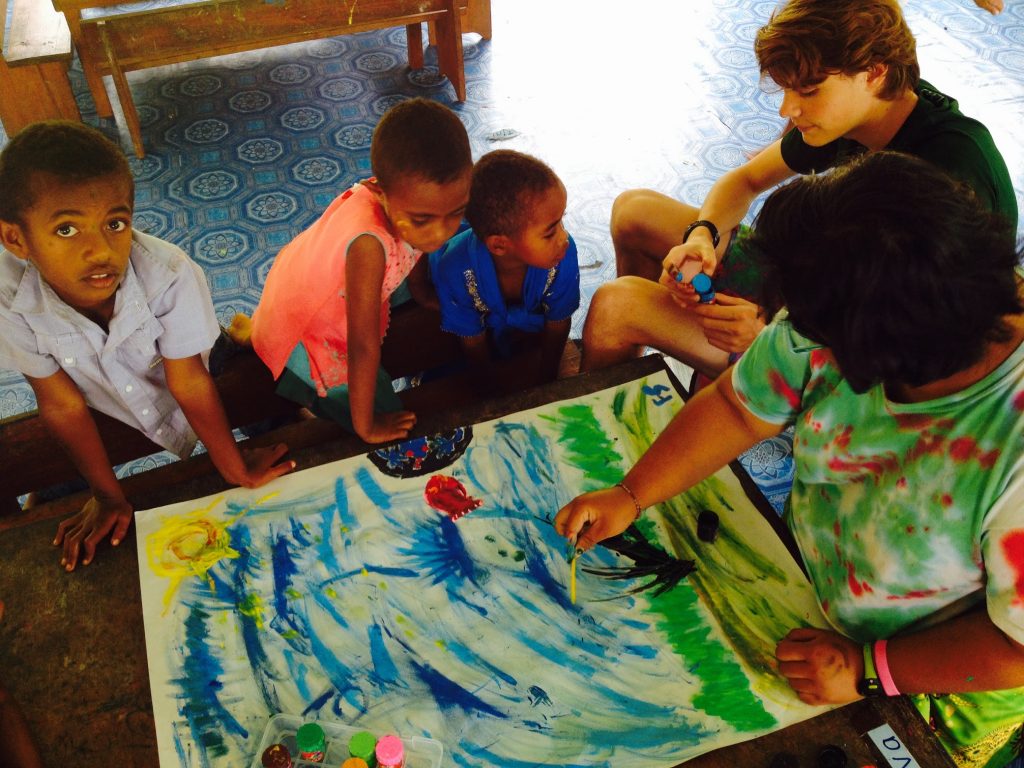 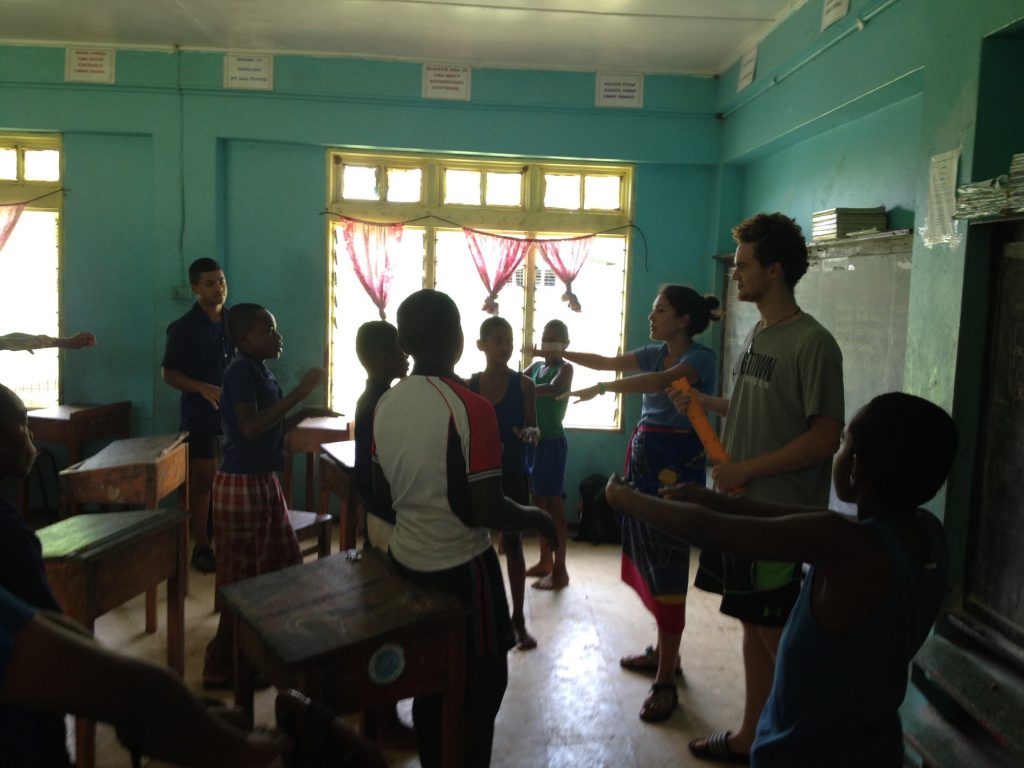 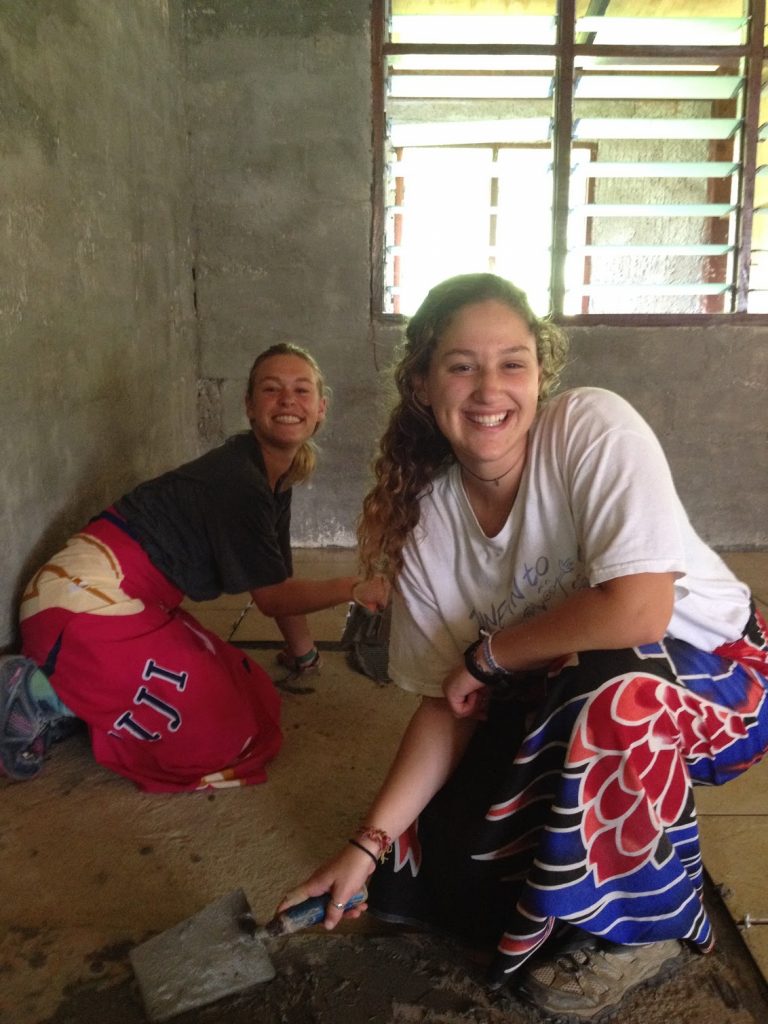 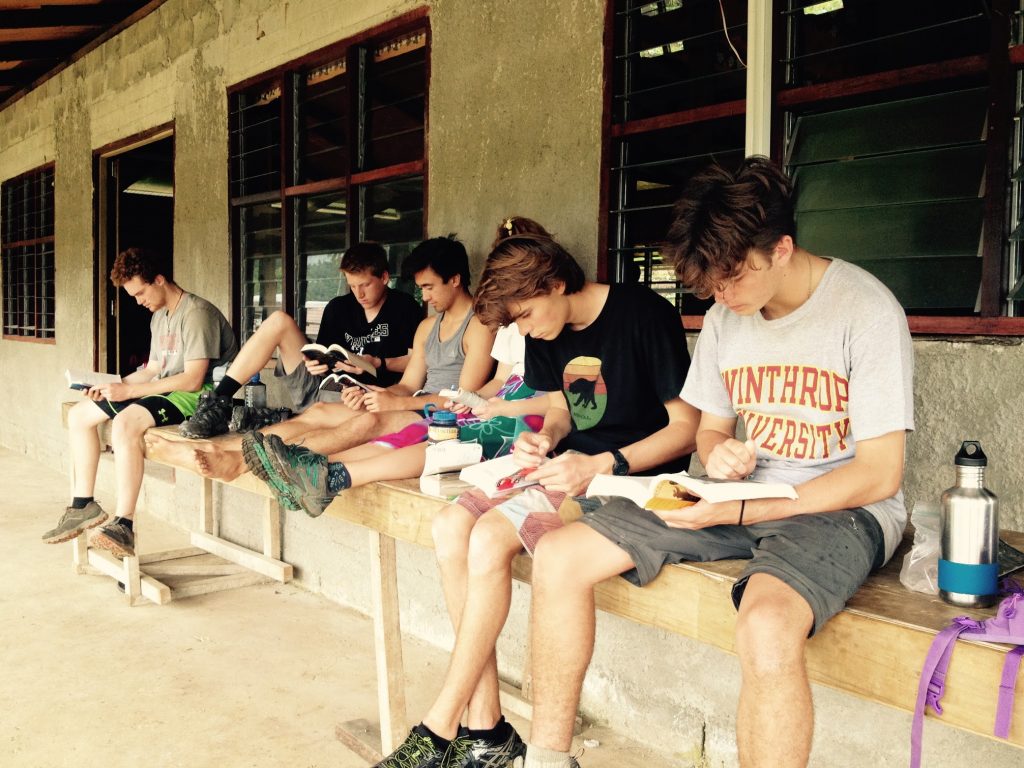 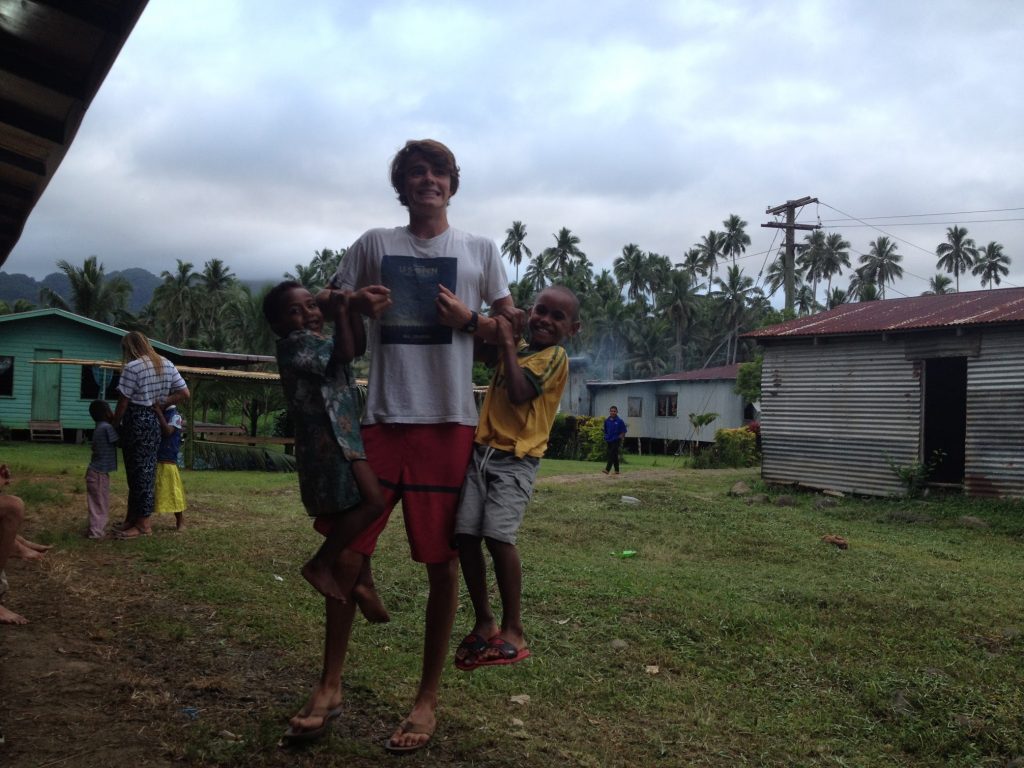 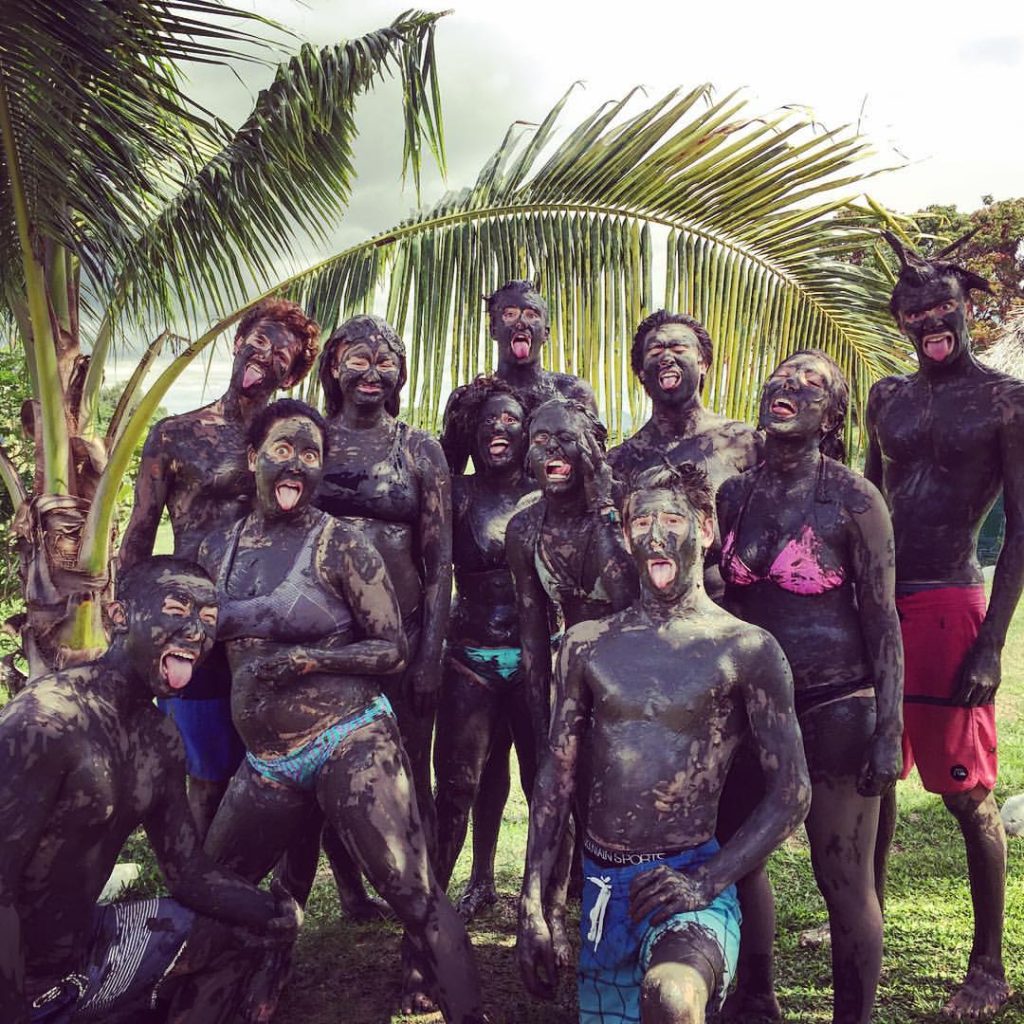 Week six of our journey began with an early morning and a flight out of Auckland, New Zealand. The flight went by quickly, as did the day. We made our way to our downtown hotel in Nadi, Fiji. There the group had an opportunity to walk around for a bit and take in some of the new culture we will be around for the next two and a half weeks. It’s quite different from New Zealand, but a good kind of different. The best kind of different.
Sunday morning we went into town to barter for some sulus before our long day of traveling. After that we met up with our contact Nazil back at the hotel. He arranged a ride for us from Nadi all the way to Suva, the capital of Fiji. The drive was a little over 5 hours, stops included. Our longest (and prettiest) stop was at some beach spot on the side of the road where we ate lunch. The view was absolutely stunning. Both the water and the weather were perfect. A picture couldn’t do the scenery justice. The drive went by relatively quick as some spent it reading or writing, listening to music, or (my personal choice) attempting to master the art of sleeping with their mouth closed. We arrived at our destination in Suva then spent the rest of the day walking around the city, checking out an internet cafe, playing some games at an arcade, and getting dinner in the food court at the mall.
Monday was an early morning. We left our hotel by 4AM to make our way down to the bus stop. From there, we rode to the ferry. From the ferry, we got back on the bus, then rode all the way to the town of Savusavu. All in all about eight and a half hours of traveling for the day. In town we waited at a little park spot for our contact Kali. He picked us up and took us to the village we’d be calling home for the next ten days. A welcoming ceremony was held for us and we all split off to meet our homestay families. We were swept away by a whirlwind of hospitality. In our home, Stevie and I were given gifts, cookies, and then they took us down to the river to bathe under the stars that were beginning to show in the young night sky before dinner.
Tuesday, Wednesday, and Thursday we began our work on the village community building’s tiling project. We hammered the floor to smooth it out, washed away the dust, then began tiling. We worked until a bit after lunch then played some sports with the village’s youth. Soccer, rugby, and volleyball. At dinner on Wednesday we were treated to a show as we ate our food. Some of the village’s youth danced for us until the mood was contagious enough that we all had to join in. Thursday night Kate and Jackie led a little “Love Language” seminar. We discussed the importance of understanding our own love languages, how to understand the languages of others, and why that’s important so that one can have their needs met.
Friday we took a trip down to the local primary school. There, we partnered up and went in to classes. The students varied in age from kindergarteners to middle schoolers. Some of us taught the students, others learned from the them, some did both. We all learned a lot about the country we’re in and it’s beautiful culture. As we departed from the school, the children gathered behind our truck and sang us a farewell song. We returned to the village to continue the tiling project and discuss the logistics of our second student directed travel. To finish the day out a group of us went down to the river for a swim before dinner.
Saturday we finished more of our tiling project. We grouted between the tiles then washed them. This was our second to last work day and our longest work day this week. After the tiling we were given some solo time with the prompt “What is wealth you”? The rain was on and off this day but it was a nice needed break from the heat.
Sunday was a family day. No meetings or group activities. Everyone was supposed to be with their homestay families. Stevie and I met our nana’s older sons at breakfast and some more of the family. The son named Toks showed us parts of the village we had not yet seen. He showed us where he lived and took us to a few different hot spring spots. In between traveling to hot springs he showed us the “flying Fijian” spot as he called it. About a ten foot drop off a muddy cliff. There we joined other boys of the village and made the leap, thus emerging from the water as honorary “flying Fijians”.
As another perfect week comes to a close, we prepare for the rest of our journey. We’ve all learned so much about the culture since we’ve been here. We won’t soon forget about the precious memories we’ve created or the meaningful relationships we’ve cultivated in our time being here. We’ve now started our tree planting project in Australia and excited for what comes next!
-Bronson