We were in Viñales and everyone was geared up for a relaxing day on the beach. When we all went to meet up to head out on said adventure, Grant decided to smash his head into an AC unit while frantically looking for his phone, the momentum of which caused his front tooth to skyrocket out of his head. This caused a radical change of plans due to the fact that Grant kept repeating “this needs to be in my mouth” and running around trying to find somewhere to put the tooth. It was probably a good call to get that fixed ASAP. That left the rest of us with a day to fend for ourselves and try to find something to do. Zoe’s casa had two rocking chairs on the front porch and a nice spot to people watch, so we plopped ourselves down out there and rocked for a while and tried to enjoy the unstructured afternoon. Out of nowhere, a small,fluffy white dog that appeared to be way too well taken care of to be a stray went flying past us, and my first instinct was to get up and chase it in the hopes of catching it and maybe even squeezing it. Before even saying so much as a goodbye to Zoe, I was off, a woman on a mission. I ran down the street and around a corner, where a woman I didn’t know was holding the dog. She handed him to me and told me he belonged to a neighbor and to bring him back. She sent me out on the street, dog in hands, with an entirely new mission. Before I could process what was happening a young girl holding a chicken in each hand passed me and casually noted that I had found her dog, and told me to follow her. Mere moments had passed since I left Zoe’s porch, but I now had a dog in my arms and was following a girl with headless chickens in her arms and waving at her with a big smile on my face as she looked at me with utter confusion on her face. I followed the girl to her house ready to toss the dog in the front door and leave, terrified of imposing. When the door opened I saw her small grandmother who immediately invited me in to take a seat and seemed to want to know every detail about me. She introduced me to her dad and her sister and suddenly I was drinking an amazing smoothie that no one gave me the chance to turn down. I was still tense, thinking I should leave and not overstay my welcome, but the smoothie and the warm smiles were helping. We talked about life in America and in Cuba, tourist culture in Viñales, and our families. They let me play with their two identical white fluffy dogs, one of which clearly had a pattern of escaping out to the street. I casually pointed out how much I liked the girls nails, to which her dad responded that she could walk me into town to get mine done. Again, my instinct of not wanting to impose kicked in and I was thinking of excuses and things I had to do, but she reassured me she wasn’t busy and we left the house together. She sat with me while I got a manicure and introduced me to her boyfriend and his friend when they came around. It seemed like everyone in this town knew each other, or at least everyone greeted each other. After my nails were dry, she asked me if I wanted to make a lap around the town carnival with her, but I had visited the night before and wanted to avoid the drunken crowd. She understood, and told me to go back to her house and wait for her. I didn’t even understand at first, because I hadn’t been in Cuba long enough to understand that people don’t care as much about the social conventions that we obsess over in America. The idea of inviting someone who I had met an hour earlier to wait at my house with my family for me to come back so we could hang out seems so foreign, I guess because it is. I ended up going back to my house to check on my sickly roommate ally, then sat back on the rockers with Zoe where we ate our picnic lunches we were supposed to eat on the beach. I figured I would see her when she walked back from the carnival, but we didn’t end up seeing each other again. The experience I had that day taught me a lot about the open disposition of the average Cuban, and that if you chase a dog down the street you could end up with a good story to tell later. 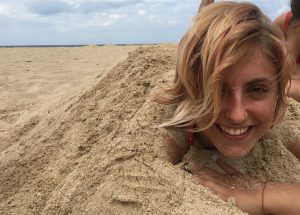