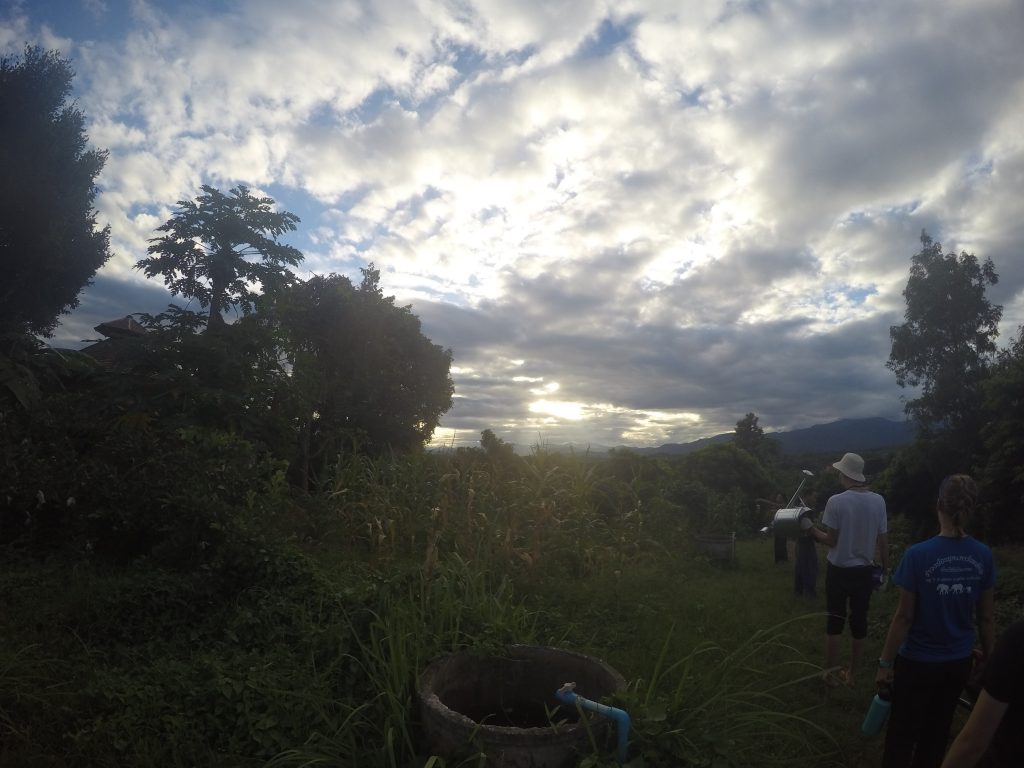 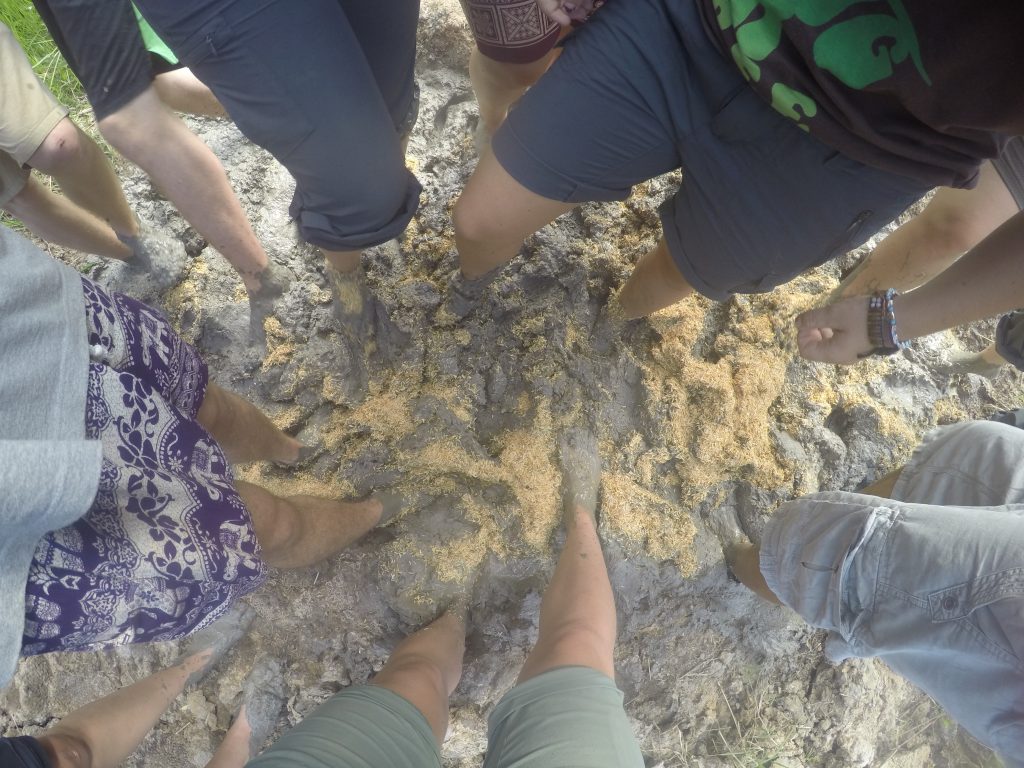 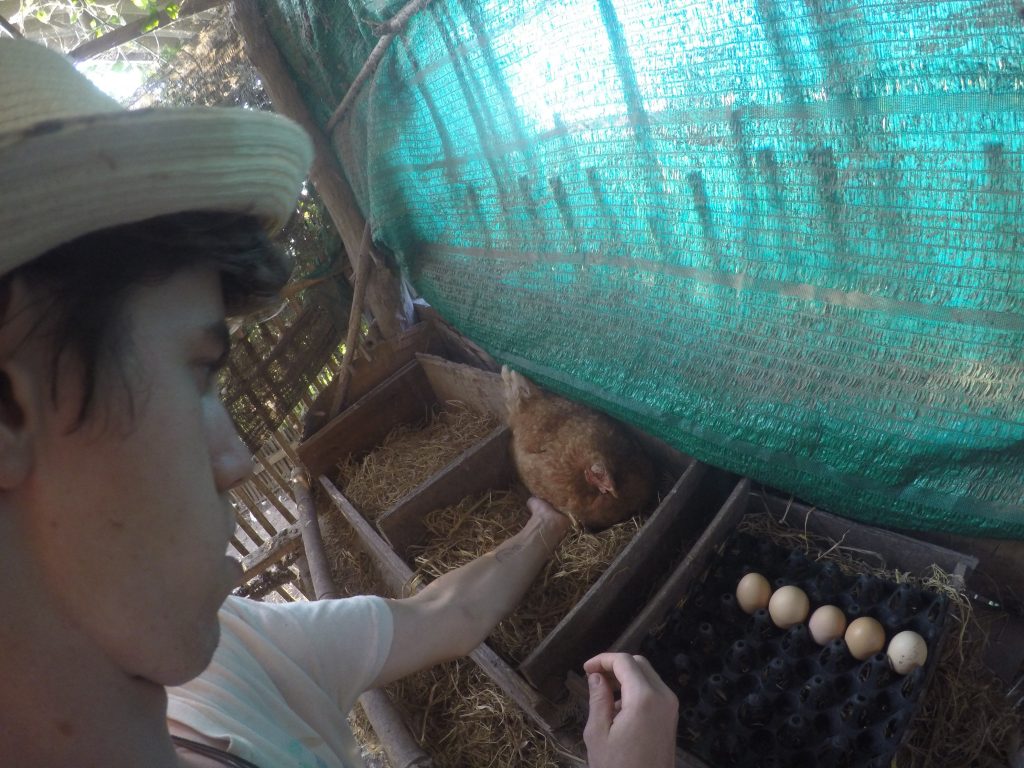 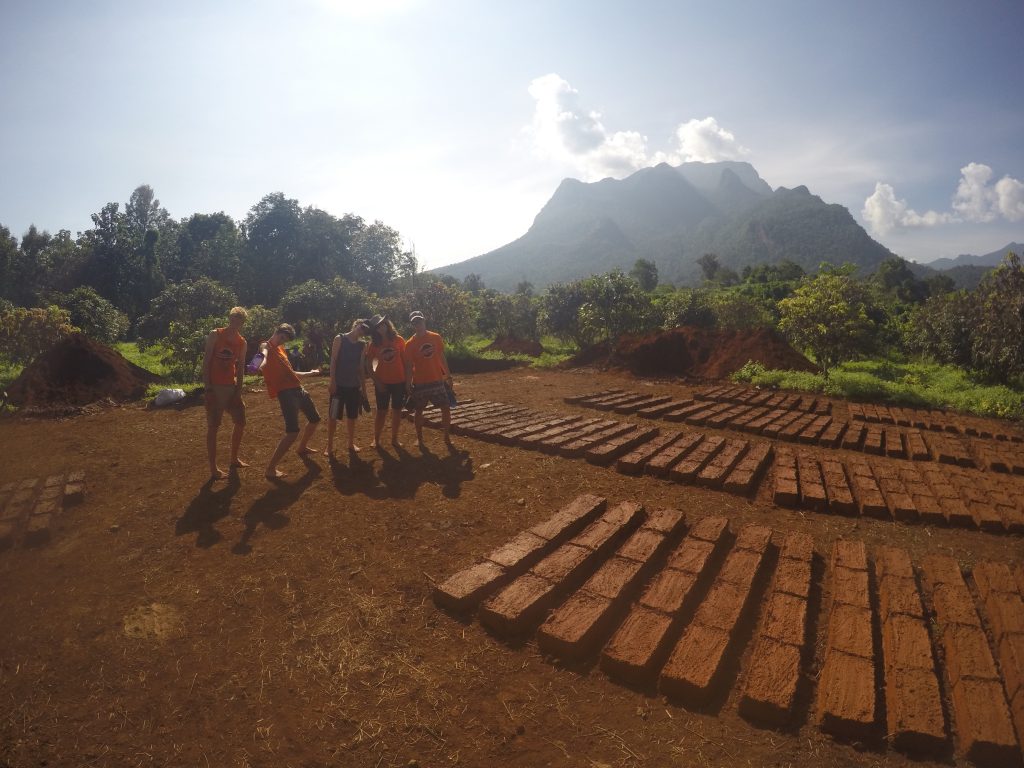 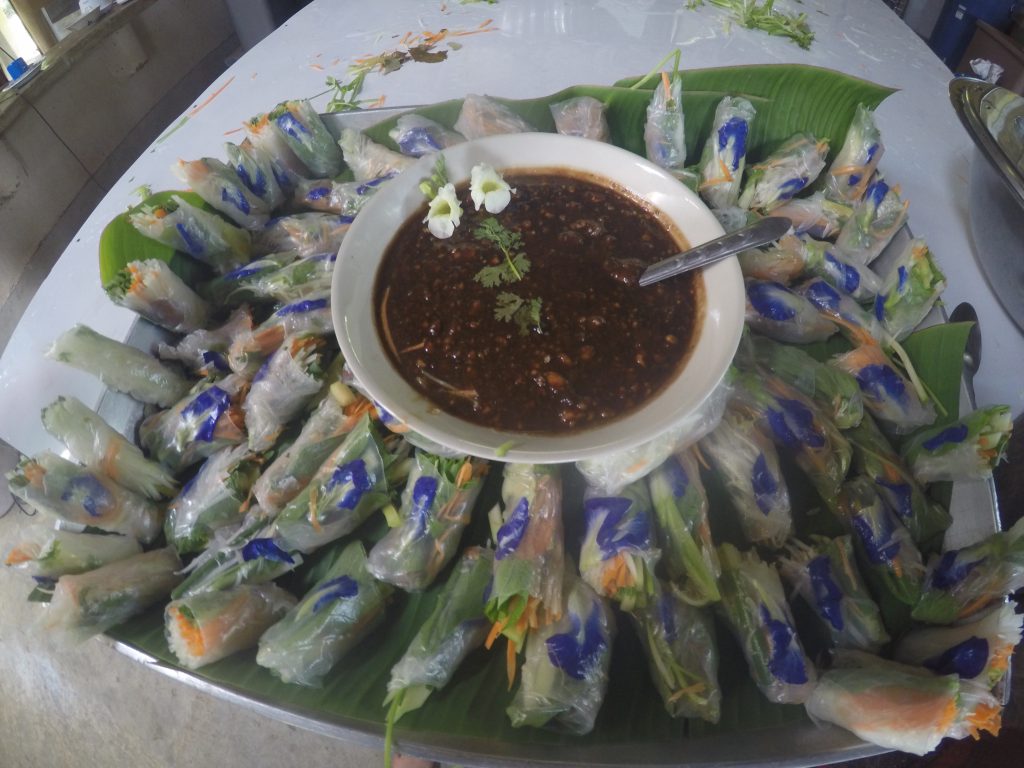 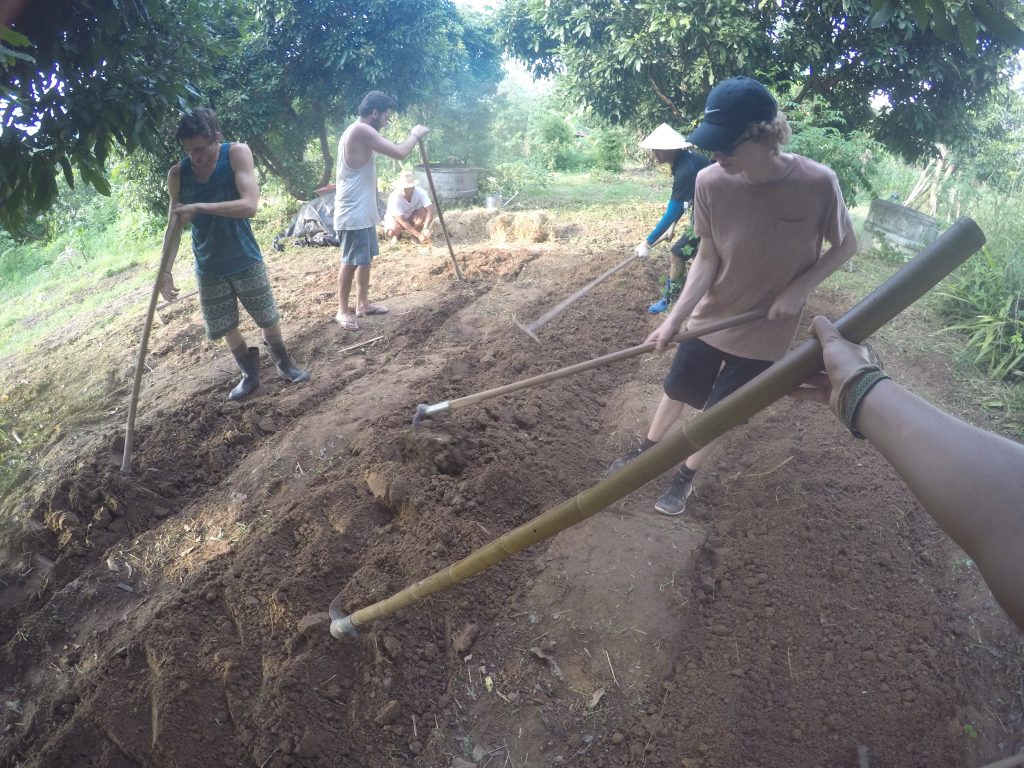 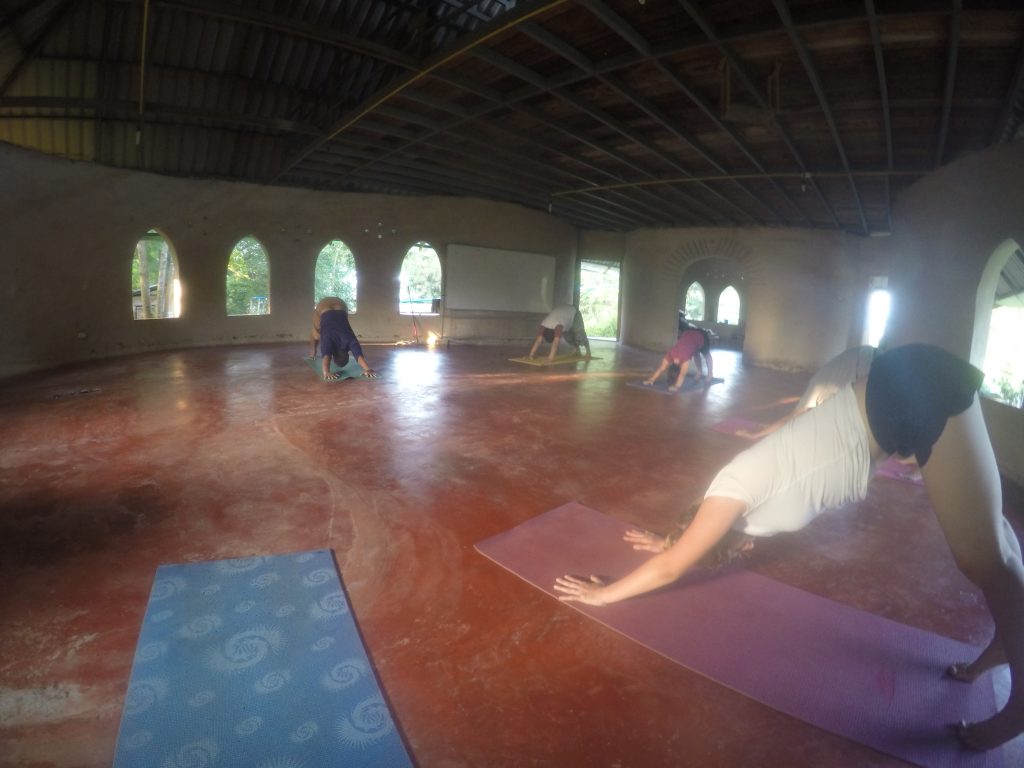 Our Pun Pun experience started out by walking on a dirt path surrounded by soil bringing life to the Earth and trees blossoming on the mountains. Soon we were enthusiastically greeted by the community at Pun Pun, including the volunteers from around the world and the locals. Once we arrived at our charming mud house, we felt the weight of our 65 Liter backpacks lift off our shoulders. We also discovered that we could choose between Western or squat toilets, and they even had bamboo urinals!

When we heard the bell ringing for meal time, the entire community here at Pun Pun galloped to the dining hall as excitement and hunger took over. We were immensely impressed and satisfied with how “backyard fresh,” flavorful, and feasty the organic food was. After round four at the buffet, we placed our food scraps in an area to feed the animals and continued on to wash our dishes in four sinks filled with reusable water and soap (to save on drinking water and to practice a high efficiency system).

Our time at Pun Pun had a large focus on experiential education, which stimulated our engagement in our day-to-day schedule. It was mentally soothing to understand the green waste cycle that the farm practices. We learned that money dependent people often believe that they live a self-sufficient life, but volunteering at Pun Pun has made us realize that people who live in harmony with the Earth’s resources are truly self-reliant. To Pun Pun, some main ideas of living in peace with Mother Nature’s resources include sustainability by saving seeds and farming organically, adobe mud brick building, and using nature for medicine and healing.

The concept of seed saving is relatively simple: its main purpose is to prevent plants from going extinct and to promote biodiversity. This has the intention of helping farmers become more independent of major seed companies who often sell genetically modified organisms or a hybrid version, which is not a reusable method. Pun Pun is very willing to offer its seeds to others requesting them. Once we learned about this, we got to create flower beds from scratch and plants seeds by clearing the land (of weeds), digging up and fluffing the dirt, adding fertilizer made of cow dung, and topping it off with straw mulch.

Adobe (mud) brick building is such a smart way to use the Earth’s resources because its breathable bricks are only composed of mud, rice husks, sand, water, and straw. We got to learn about the process in a very fun way by dancing around in a mud pit to mix together our formula, and then we poured the product in a mold resembling a ladder. Since there were already some bricks made when we came, it was very fascinating to see how something so soft and squishy can turn into solid matter by cooking it in the sun. It’s amazing to walk through the Pun Pun community and see different designs of homes that were sculpted from scratch by the people living in them. The living roofs made from growing plants is a very unique add on! After we became pros at mud brick making, we volunteered with the International Women’s Partnership for Peace and Justice the next day. We split into two teams and we managed to build 500 bricks in around 4 and a half hours for the women’s building workshop later in the year, which promotes equality of the sexes as well as social justice.

Mother Nature not only provides us with food and building materials, but also grows plants to restore our health. For example, a leaf with a cooling property can be consumed or rubbed over the body to eliminate a fever or simply cool down on a hot day. There are also multiple scraping methods used with balm that can be practiced around the body to treat any internal and external maladies. One can even detect cancer with this scraping technique, though it requires 60 or more scrapes in the same spot. We learned about the power of pee and how it can be used to provide relief from itches, stings, acne, or other skin problems. This information made us realize that modern medicine can sometimes have chemicals that cause more problems than it cures, not to mention it’s very expensive compared to the natural remedies that are more effective and have very little to no financial cost.

Me personally (Miriam), I was looking forward to animal care since day one. I love working with animals and caring for the cows & chickens here at Pun Pun. I’ve never witnessed an animal care taker cook a stew made of chopped fruit, banana tree stems, and food scraps for a cow which, I think, shows great care and dedication to them. It was also then that I milked a cow for the first time. It was easier than I though it would be and, I’m not going to lie, at first I was worried about hurting the cow. It felt rewarding to see the milk squirt out in a relatively strong stream into the bucket and be able to collect a decent amount. Though that was the highlight of volunteering in animal care, I really enjoyed contributing to the well being of the animals in such a personal way, be it chopping up fruit to prepare their meals or cleaning up their living space by hosing it down. Feeding the chickens and collecting their eggs also felt very rewarding.

For me (Dana), this entire experience has made me realize how much I care about environmental sustainability and living a healthy, organic life. It feels really nice to gain an understanding of what I’m truly passionate about and I would like to continue learning more. I’m so thankful to have been able to enrich myself with the eye opening philosophy here at Pun Pun because it gives an outsider (like me) a new perspective on the meaning of a natural, peaceful, independent life.

Cheers to the exciting future!
Dana Bruhis and Miriam Ganslmeier

Every week we will be introducing you to one of ou