Spirits were high as we left an amazing three days in the remote mountain village Taghzhirt to head to the Sahara for Festival Taragalte, a celebration of nomadic culture and music. We were all pretty blown away (haha… keep reading) when we first got to the festival grounds and looked at the rolling dunes of soft sand surrounding us. It didn’t take long for us to throw our stuff down in our tent of questionable construction and summit a dune to assess the landscape around us: a line of palm trees in the distance toward the town of M’Hamid and an expanse of sand as far as the eye could see.

We arrived the day before the official start of the festival, so the next morning we began our volunteer placements. Nate and the OEs were on trash pick-up, Cole and Owen collected tickets at the restaurant, Ady and Leighton worked at the information desk, and I worked at the boutique. We all ran into our fair share of issues in our different roles; the trash crew wasn’t given gloves to work with (yikes), restaurant boys had to deal with a lot of confusion as a result of the festival’s disorganization and failure to adequately provide enough food for everyone, the information desk got hardly any information to then relay to questioning attendees, and most of the people who came to the boutique were actually just trying to find the information desk, not to actually buy any merchandise. Not all was bad, though. Throughout our experience, we were able to bond with fellow volunteers from around the world. One, from France, showed us his insanely impressive guitar abilities. My co-volunteer in the boutique was from Germany and tutored me in German to pass the time. The Moroccan women who worked at the info desk doodled henna on our hands when there wasn’t anything else to do.

Although days felt empty with few activities, the musical performances at night were amazing. Not only was the music itself incredible, but so was the overall atmosphere. The audience was divided into those who sat with toes in the soft sand, those who stood and swayed with the music, and small groups of friends who, fully immersed in the music, danced with so much liveliness you couldn’t help but smile when you saw them.

The first night of the festival brought with it rain, and we awoke on the second day in puddles of water that leaked in through our tent. Not the most pleasant of mornings, but as the day went on, the sun came out again. In the afternoon we got to see a “camel race” — it was actually waiting for two hours past the posted start time just to see some camels run back and forth in front of the audience a few times. One thing we learned: camels have horrible steering, and WILL run into the crowd. Luckily we were only observers and not victims of this phenomenon. That night, we went to the top of a dune to stargaze. Although we could faintly hear the sounds of the main performance, we got our own entertainment from listening to groups of friends singing from various encampments hidden throughout the dunes.

If any of us wanted to bring home a bit of the Sahara with us, their dream was unfortunately granted on the third day as a relentless, 12-hour sandstorm rolled in late morning. It didn’t take long for a thick layer of sand to envelop everything in our tent. We covered up best we could, but any trip outside of some sort of structure meant stinging eyes and getting even more covered in sand than what we were already getting within our tent. We tried to get through it in any way we could — we spent time sharing funny travel stories with a group from Scotland, some of us went on a sandstorm souq adventure for snacks and souvenirs, but most of our day was spent huddled up, powerless against the force of the storm. By 8pm we were stir crazy, frustrated, probably more sand than human, and the most fed-up of the group braved the storm to try to find a better shelter than our tent that was definitely not up for dealing with the elements (although, it was one of only a handful that did remain standing throughout the storm; the OEs had to dodge wooden beams as theirs crashed on them). Hysterical enthusiasm ensued, as the mission was a success and we grabbed the essentials and made a run to a vacant higher-end tent. With the wind still howling outside, we got what felt like the first true break from the storm since it began.

Are we happy for our experience in the Sahara? Through the comfort of being far away from the festival grounds in a structure with solid walls, I’d say yes. It was (it better be) a once in a lifetime experience. However, there were definitely no complaints as we packed up our sand-filled belongings and headed out the next day for a few days of rest before our next placement in Ouarzazate. 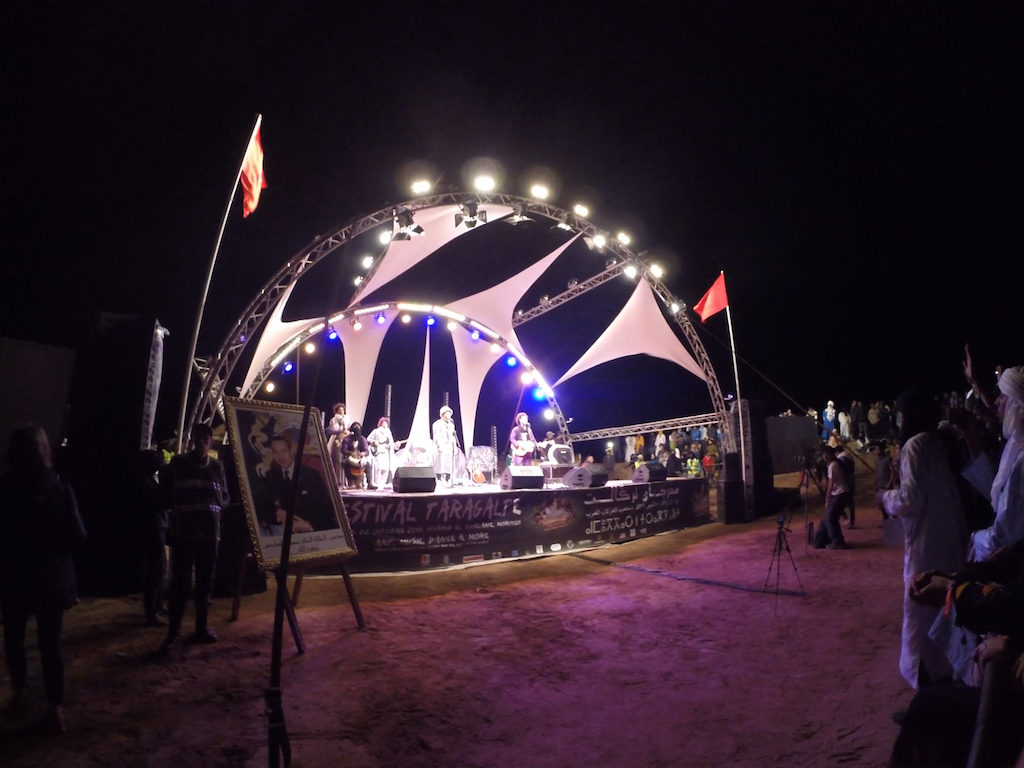 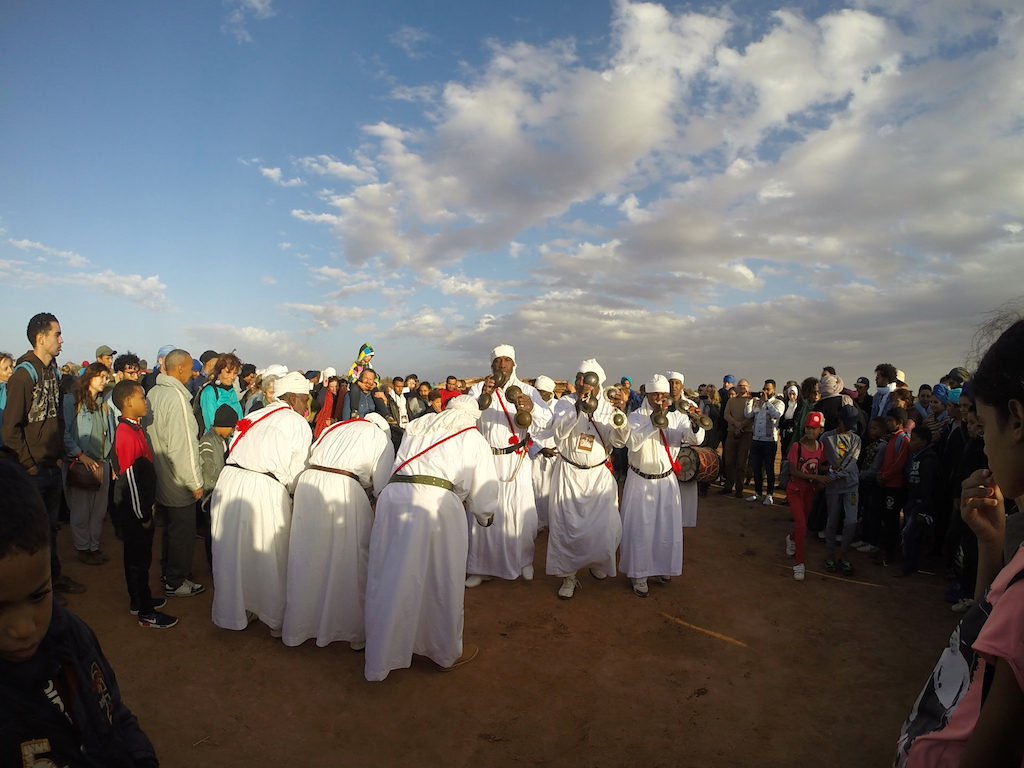 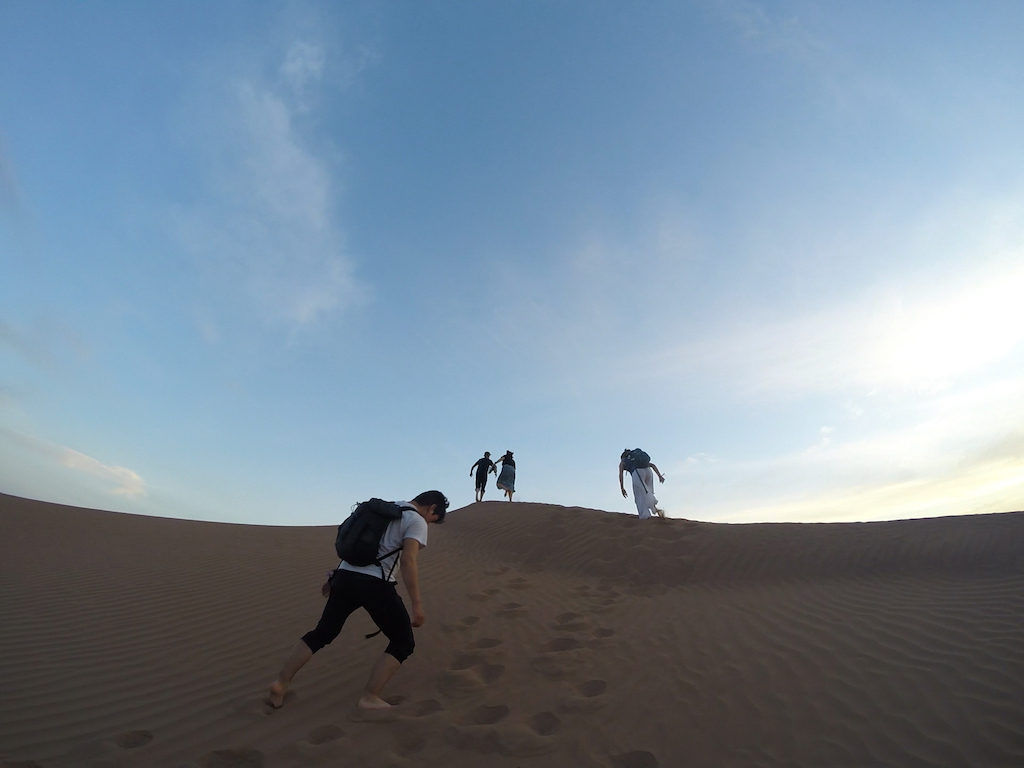 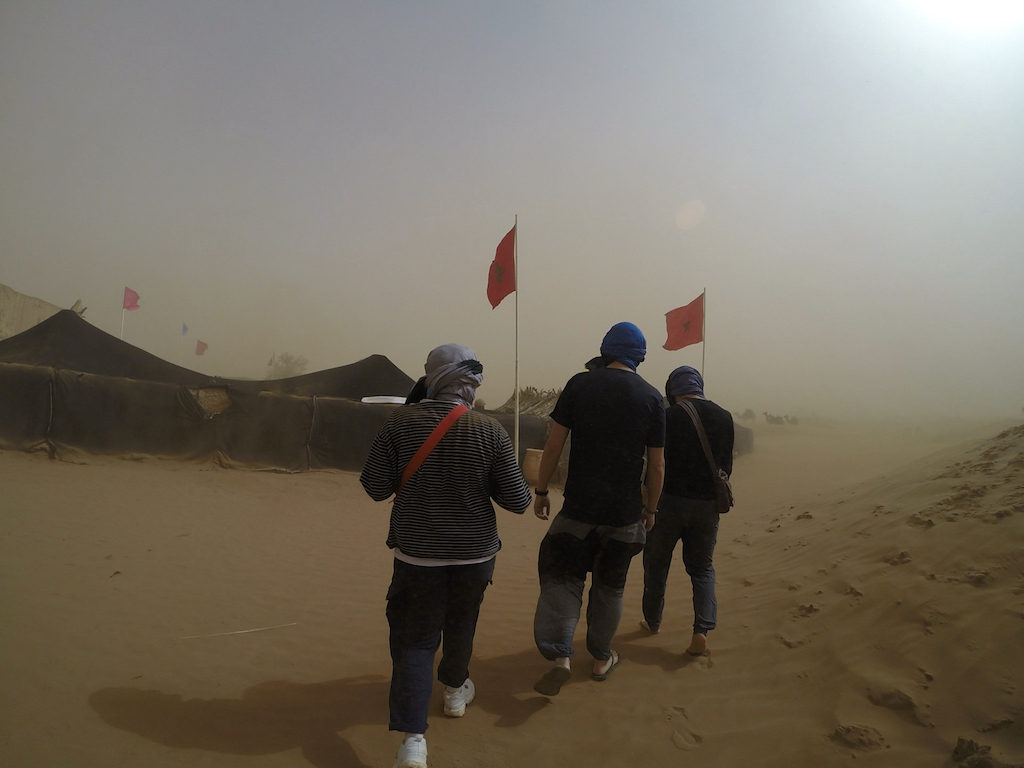 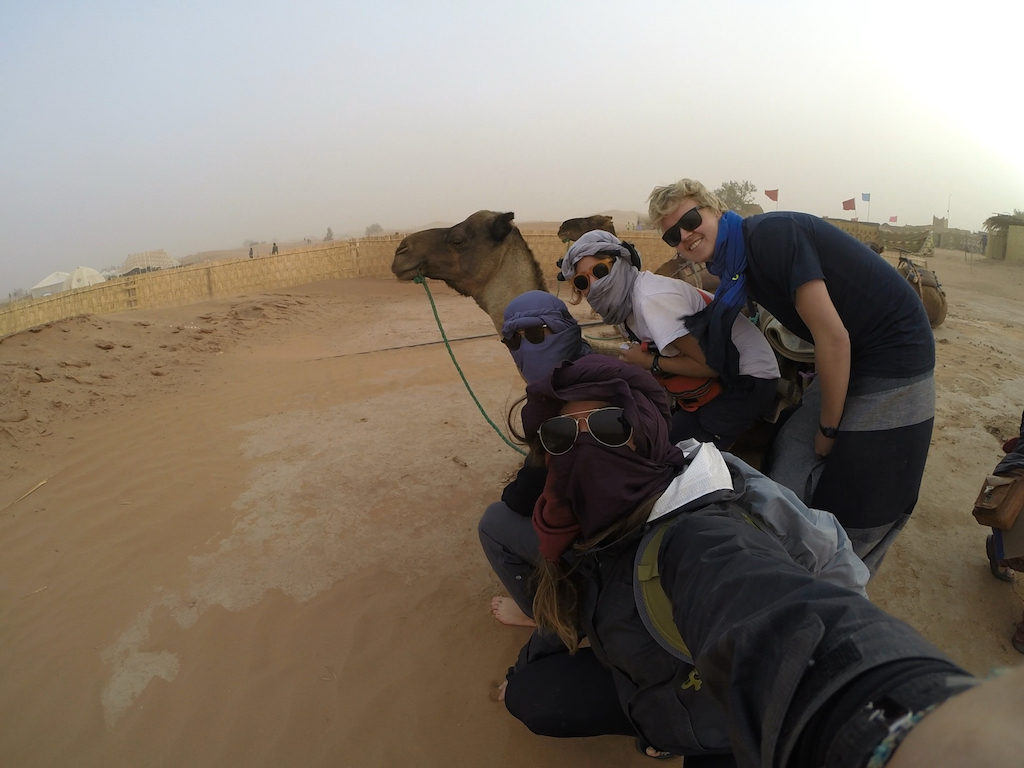