Sights & Sounds in the Moroccan Village

I’m sitting right now on the ground level “balcony” that serves as the roof to the bottom floor of our homestay house as well. The bottom floor is inhabited by the big animals that belong to our host family, a cow and a mule. They both share time in the little patio (pictured), however, aside from those animals, it is difficult to tell which animals belong to who.

The animals are everywhere here, and it is not a common occurrence to make the 10 foot walk to the Turkish toilet without seeing an animal of some sort, most often a chicken or cat. The most popular animal here by far is the chickens, they’re everywhere and often have a string of chicks, varying in size, trailing them as well. Second to the chickens are the cats, and they act like they own the place, wandering through houses at all hours of the day, all of the houses of the village. Dogs also are a popular pet here, although not much of a pet. Most of them are herding dogs and are far from the friendliest dogs that you have ever met. It has seemed to be the trend for Morocco as a whole. Cows and Mules are popular here, although as far as I am aware, no family seems to have more than one of either, although most seem to have at least one or the other, often both. The final big name animal around here are the sheep, which pass us as we walk the local trails to the school, or are herded through the town, they are always accompanied by a shepherd or two.

Roofs seem to be used as a multi-purpose flat surface, as people are often spotted doing some sort of work on top. Laying or turning Walnuts to dry (called Almonds here, although I’m sure that the spelling is a little different), making food, relaxing, or maiz for the animals to eat. We noticed quickly, and ours became a place to relax, read, or journal.

As I listen from my perch, I can hear the chatter of people coming and going from the little shop in front of me, and about 10 feet down. The chatter grows and shrinks, as people come and go, but there is always at least a murmur coming from the general direction. In the distance, I can hear the river as it rushes down rocks and through the valley, several hundred feet below, always there, but always in the background. Even in silence. All around are the yells and shrieks of laughter of the village kids running and playing. Occasionally the soundscape will be broken by the loud rumbling noise of walnuts being poured out of their bags to be dried, or those further along in the cycle being turned and mixed.

From here, my view is great, I can’t see too much of the village, but I can see enough to know what the rest of it looks like. I can see the people come, go, and congregate at the little shop below me, whether just to relax, or do business, everyone grinning and slapping each other as friends would. Beyond the village, I can see down the valley in both directions, following the river and mountains. The handful of visible trails cut through the mountains, each clearly with their own purpose, and leading everywhere. Northward, just barely visible behind the mountains in front, and the clouds rolling over the peak, a patch of snow is visible. Possibly the only snow we’ll see this entire trip. Just in the corner of my vision, on the right side, I can see another hillside village just like this one, yet still so foreign.

All in all, something in this village has made us all feel oddly at home, even though, we’re in a tiny Moroccan village that takes 4 hours of hiking to get to, not the urban America we grew up in. 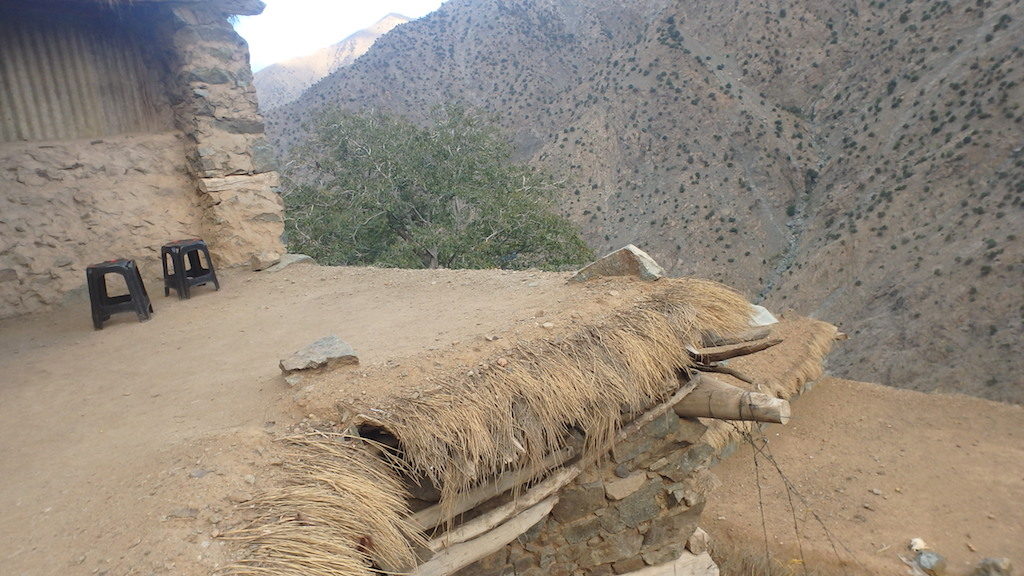 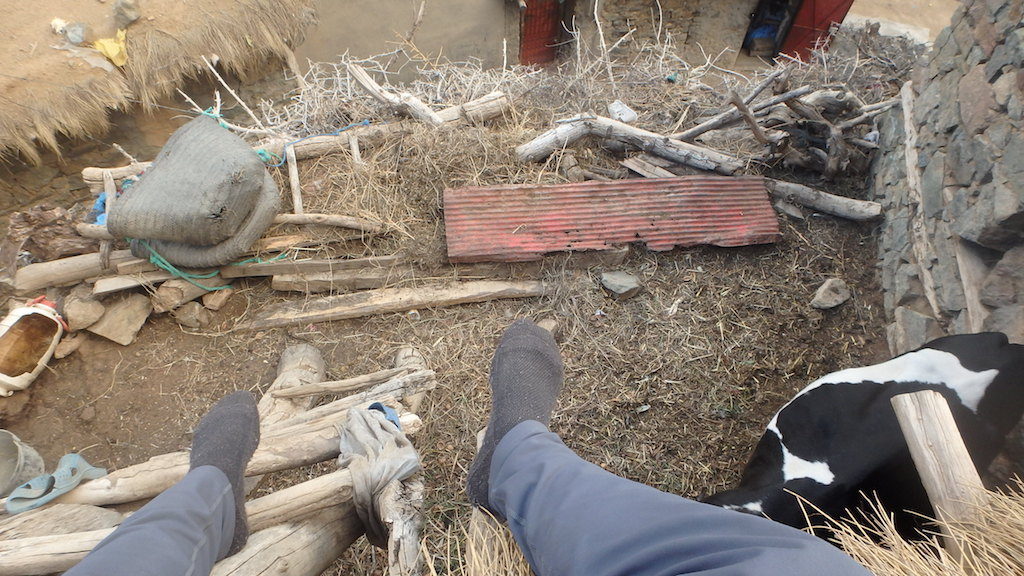 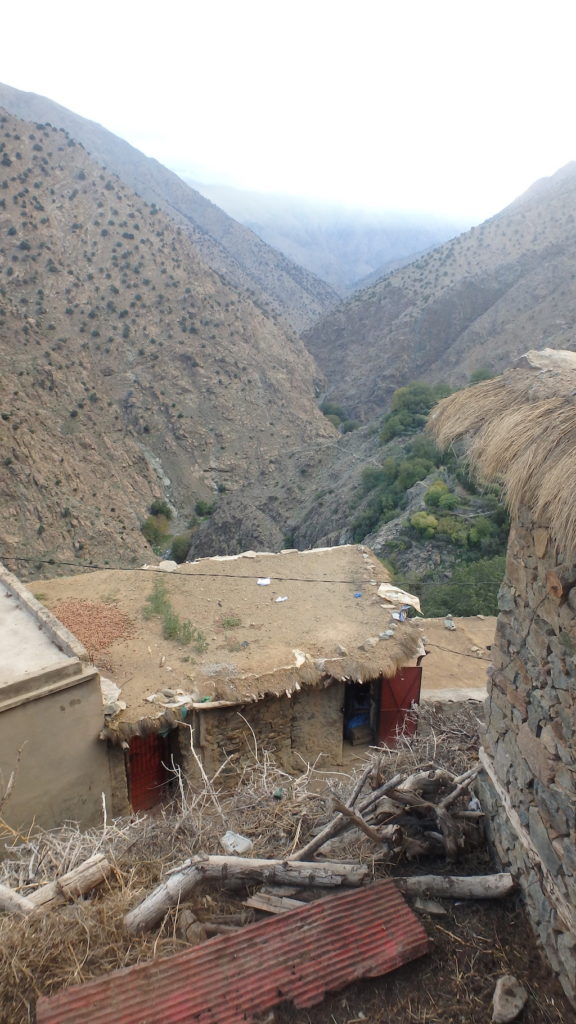 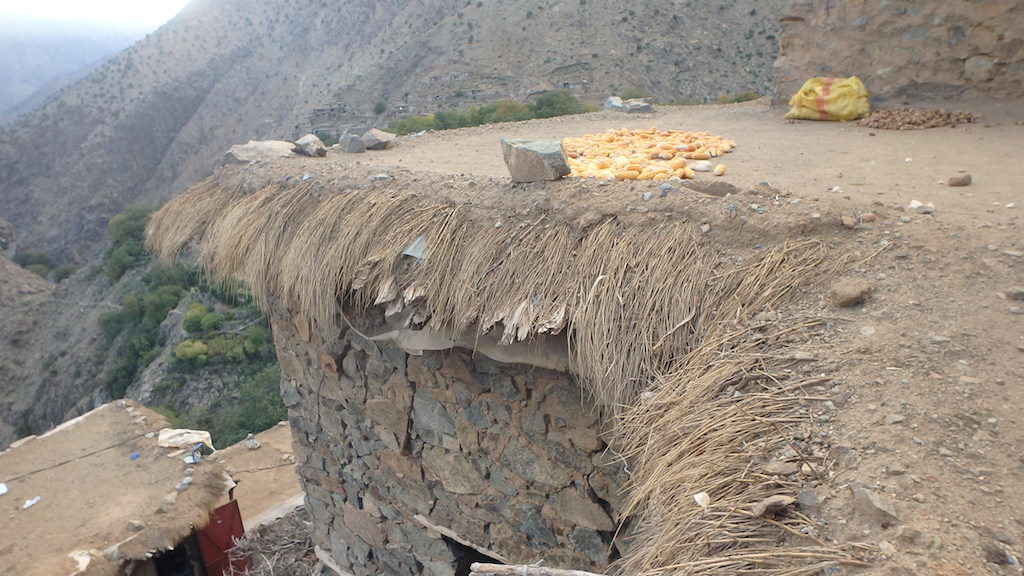