Kia Ora loved ones! This past week we have all taken a step into the indigenous culture of New Zealand to learn the history of the people, the language they speak and most importantly, what it means to be Maori. Throughout the week, we were led on a journey of cultural immersion by a Maori native named Tiaki. Tiaki speaks with a gentle eagerness to share his knowledge and cultural background. Tiaki emphasized the importance of internalizing all that he taught us and, more importantly, committing to apply our learnings back home. He opened our eyes to a deeper understanding of who we are as individuals and connecting that with a spirituality. At all meetings, Tiaki would speak first in his native Maori tongue before loosely translating it to English. Although we may not understand his language, we all appreciated the tremendous respect that he displayed for his culture by incorporating Maori language and tradition into all of our sessions. He blessed us before and after every activity with a Karakia (a prayer) to help us get the most out of every experience; each Karakia was unique to the Mana and Mauri of each lesson. Our biggest takeaways from the week are highlighted by three major Maori ideals: Mana, Mauri, and Tapu.

Mana – The intrinsic power where one holds their strength and passion. In essence, it is a representation of who one is and what they are about (all that one has been and all that one is). Tiaki tells us that there are two forms of Mana. The first being our Great Mana which he calls Mana Atua and the other being Mana Tanguta. As Tiaki explained, “One’s Mana Atua is unchanging, it is forever.” It is the idea that everything is exactly how it is supposed to be within you. It is gifted to all at birth by one’s ancestors and remains true for life. Mana Tanguta, on the other hand, is developed by one’s human self. It is the intrinsic power one constructs throughout his or her life.

Mauri – “Mauri. Mauri comes in many different forms. Everything in the universe is composed of Mauri, penetrated by Mauri, and connected by Mauri. This includes all people, creatures, objects, and places. Like a fire, your Mauri can either burn with strength or smolder dimly. It all depends on the fire’s surrounding conditions as well as what you fuel it with. Your Mauri not only represents your state of health, but also your state of mind.”

In other words, Mauri is the energy given off by an individual or thing that represents the current state of its being. It is often regarded to as the vibe, aura, or qi of a room/person. Mauri can be either good or bad as it is ever-changing.

Tapu – The act of placing reverence on a person, place, or thing. It is the concept of placing honor upon which one respects and is sacred to one’s heart. This can refer to a sacred place where one honors its meaning and what it stands for. This is an important ideal as many places are sacred in the eyes of Maori culture.

For the first major exploration into Maori culture and tradition, Tiaki led us on a hike up a sacred mountain named Karioi. As a part of the trekking experience, we all took turns carrying up a twenty-pound rock up the mountain. The rock was very symbolic as it was etched with a Maori design to not only represent its own possession of Mauri but the Mauri of the group as well. Although the hike was quite challenging for most of us with sliding in the mud on steep inclines and carrying the rock, we were all ecstatic to see the view at the top. Tiaki then prompted us to consider what the three values of Mana, Mauri, and Tapu means to each and every one of us. As we all dispersed across the peak of the mountain to have time to self-reflect, Tiaki instructed us to let wind clear our minds in order to escape our thoughts and truly connect with the three values. Focusing on nature and the elements around you is a key aspect into being able to connect with thyself and truly reflect on the values that one holds. During our thirty minutes of solitude, we were all put through a test. Seeing rain clouds looming over the Pacific, we all needed to get in a mind set to weather the storm. This was Tiaki’s message: in Maori culture, young kids would be sent out for five days to face the elements of nature without any food or water. This challenged them to open their minds and discover who they are beyond physical aspects of life. It was as if Tiaki planned the timing of the storm perfectly. As soon as we all settled with the idea of muscling through the rain, a gust of wind broke the clouds allowing the sun to shine through. 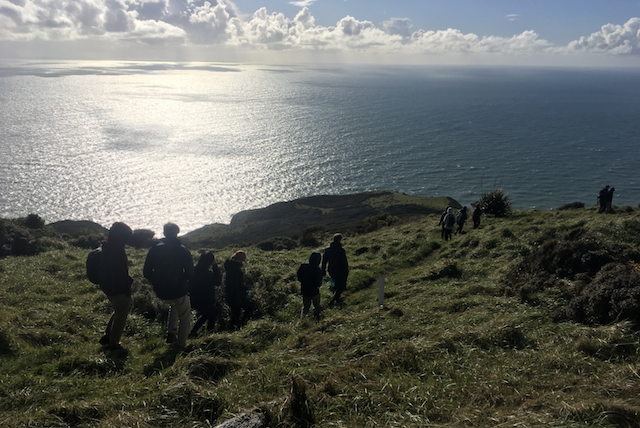 Our next adventure with Tiaki brought us to Wairēinga Falls, a waterfall sacred to Maori culture. He explained that many Maori come here and allow the waterfall to cleanse them of whatever may be bothering them. Tiaki then directed us down the cliff, offering us the opportunity to release any and all burdens that we had been holding onto. At the bottom, after all burdens were released, we gathered in a circle for Tiaki to lead us in a Karakia (a prayer). Again, without fail, the wind picked up just as our group let out a unison “TīHei Mauri Ora!” The gust of wind redirected the free falling mist to hit us head on, and, as our words echoed into the water-carved cliff side, the Father of the Sky brought rain upon us. However, looking over, complete bliss consumed the group. Smiles were wide, eyes were bright, and everyone’s Mauri was high. 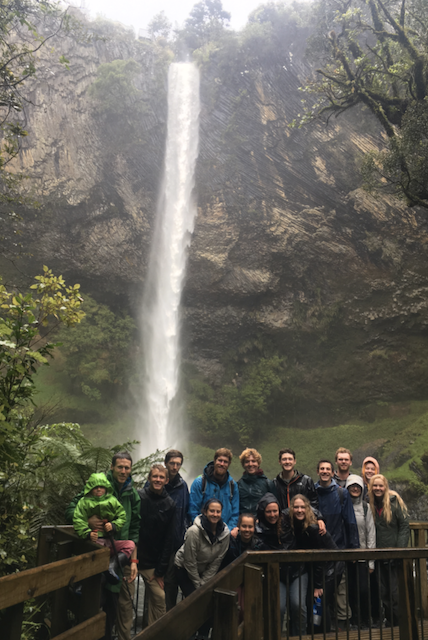 Although we are moving onto our next adventure, we can all confidently say that our week immersed in the Maori culture left us inspired to share and continue our look into indigenous cultures, both at home and abroad. We are all eager to deepen our awareness of self and grow with what we discover. A big TīHei Mauri Ora to you all as we embark on our journey to the South Island!