I grew accustomed to seeing dogs speeding along the road with soda cans tied to their tails. Or the daily incident in which four dogs were intertwined with one another post intimacy. The four remained stuck to each other like the cartoon “Cat Dog” as more dogs would attempt to join in. This was typically followed by numerous voices shouting “dale dale” to the pack of conjoined dogs attempting to scare them away. A lack of television lead to frequent afternoons on the porch outside of my casa watching these street dog escapades. One afternoon I saw a smaller honey coated puppy trailing behind two men. Initially I assumed this dog belonged to them, but she quickly reversed and headed in my direction. She stopped herself near a garbage bag outside of the casa next to mine. I ran to greet the puppy and quickly noticed her many scabs. In addition to her scabby skin her body was covered in dirt and she smelled of urine. I immediately picked her up and thought to take her to another casa in order to bathe her as my casa mother was nearby. I placed her under my shirt and frantically knocked on the door to Julia and Ally’s room. As soon as they opened the door I presented the puppy to them and squeals of excitement reverberated across the house. We bathed, fed and snuck her into my room to nap with her. In spending two days with her it was hard not to fall in love with the sweet puppy. We eventually named her Barnie short for Barnacles. I carried her with me to the wifi park and used my wifi cards to research the process of taking dogs back into the U.S. It proved to be very difficult, expensive and time consuming. However I couldn’t bear the thought of giving her back to the streets of Playa Larga. Unsure what to do with my newfound friend, I thought of the new friends we made in the neighboring town of Pálpite. The students at Korimakao were kind, loving and compassionate and I hoped they would provide Barnie with a new home. We called some of our friends and met them in Playa Larga. I held Barnie and introduced her to the boys. We immediately asked if they would consider taking her in and without hesitation they agreed. At the end of the night they would take her back with them and provide her with a new home. A wave of relief struck the group and we grabbed the boys hugging each one closely. 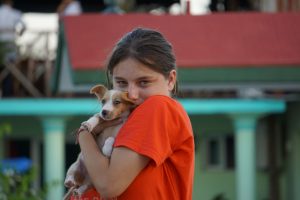