The View From Antonio’s

While you’re out there somewhere flying over the Atlantic in an aluminum tube, we’re back in Malaga at Antonio Banderas’s sipping beverages and gazing at the alpenglow on the Alcazaba. Okay, not quite at Antonio’s, but a couple of buildings over, and we’re gazing at computer screens writing blog posts and presentation evals, but still, I think you’d agree, it’s a flex.

It’s hard to believe you’re gone. And we wonder if you feel the same way. We keep expecting you to come rounding the corner, hearing you 10 minutes before we see you, recognizing the voices and being able to guess what the topic of conversations were before you limp all dangly, croc’d and chaco’d, laughing, into view.

Smiling Mente, apparently “dead” with joy for the 256th time of the trip, having just seen the last episode of GoT; Vanesia, the picture of stately satisfaction, eager to show off her latest “cute” bargain that she got a deal on, while Tori, also holding a shopping bag, tells her how her mother might say she doesn’t want anything from Spain, will definitely be happy with the chocolate she just bought her; meanwhile, Brandis is excitedly reciting, in Russian, how to properly greet the teacher from whom she learned to disassemble a machine gun; Eliana is explaining the intricacies of the Spanish election and the significance of the PSOE party’s victory, while Kayla, hearing the beat of some street musicians, is dancing in the middle of the pack out of sheer exuberance; and above it all, Gina is loudly protesting, her voice her trademark mix of admonition and mirth, that no, Geoff, she will absolutely not like to hear how his wardrobe back home in Westchester County ranks, piece-by-piece, starting with his socks.

It’s hard to believe it’s over. From the beginning, you brought such courage with you, willing yourself to try this gap semester thing out with your weird leaders and strange teammates from exotic places like Appleton and Denver. You embraced your Moroccan and Spanish families and teachers, and had that loving embrace returned to you. You persevered through all kinds of distress: the lack of familiar foods, the lack of your family’s presence, the lack of electronic means to contact them, the overabundance of chocolate. You shared rooms and clearly stated your needs, stormed for a looong time, but then clearly and to a remarkable degree especially on our mini- and maxi-SDTs (and we mean Maxi) and the Camino, performed. You truly were the champions, our friends.

And fun, funny, to boot. You endeared yourself to your OEs, teachers, local contacts, guides, fellow peregrinos, dogs (cats, not so much), and we will forever remember this long pilgrimage we took together from the crowded medinas and snow-capped peaks of Morocco to the magnificent Andalucian seashore and dusty, olive green hills of the Camino Mozarabe, from newbies to savvy, from strangers to friends. Ojala. Inshallah. Alhamdulilah. 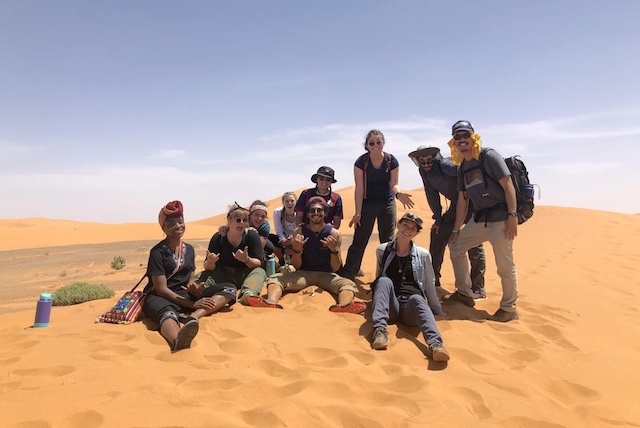