Yes, it’s time for the weekly team Chango update. After a wild week of going with the punches for independent student travel, I think all of us were a bit relieved to have a set schedule again in the heart of a beautiful farming town.
And although the churros here are ten times the price of the churros in Santiago, I still can’t complain because there is something so sweet and special about this place.

On Sunday afternoon, we rolled into Vinales and were immediately welcomed by our homestay families and the leader of the organization in which we were going to work with for the duration of our time here, Yoel. We were then divided into four different houses of the families we’re staying with and got settled in and prepped for the week ahead.

We started off Monday with an excursion to the first farm we were to visit: El Olivo. We spent the morning weeding a whole patch of carrots and then that was followed by a talk about the Vinales National Park by Yoel. We learned that Vinales is the 4th most diverse place for plant life in the world. Within this National Park, 100% of farming is organic. This organization works on bringing solar energy to rural communities and holds workshops on topics such as soil conservation so that campesinos (farmers) from other communities can come and learn this knowledge and bring it back to their villages.

For our second day, we visited the farm La Finca Cueva. As it turned out, Monday was just the warm up day in terms of weeding. We spent the day battling fire ants while pulling plants from the earth. There’s something therapeutic about the repetitive motion of weeding and hoeing. But then again, that’s coming from the girl who’s volunteering for a few hours, not from the families who spend years pouring hours upon hours of work into these plots of land while receiving as little as $2,000 a year for their produce.

And then Wednesday. Are you thinking what I’m thinking? Yeah, farm day! This farm was the first organic farm in the area. They grow 80 different types of plants here throughout the year. We became enlightened on all the alternative ways to repel bugs without pesticides. Here’s some examples: soaking tobacco leaves in water and then mixing that liquid into the soil, painting wooden boxes with bright car paint because bugs are attracted to the smell/color and then they get stuck on the paint, and strategically planting “the flower of death” and basil (both of which bugs dislike) around the growing crops.

But most importantly, did you know that it takes 6 months for a pineapple to grow from the moment it’s planted to the moment that it’s ready to be picked? Just one pineapple per plant. That is a mind blowing amount of pineapple plants.
After some more weeding, hoeing and hauling, we sat down at the farm’s restaurant and ate an amazing meal made from everything that was grown at this farm.

The cool thing about all these farms is that each one provides food for a different restaurant in town. I’ve never seen such a simple process of farm to table in my life until now. On Wednesday evening, we ate at the restaurant whose food is provided by the first farm we volunteered at.

This entire week has been structured to farming in the morning and having the afternoons free for exploration. During that free time, Taylor and Shelly searched the entire town for ingredients to bake banana bread (in the end, they ended up baking it from a pot on the stove), rooftop yoga, learning how to roll cigars, a cave tour, a salsa dance class, many runs on beautiful country roads and I had the opportunity to perform a song at a local dance club.

Also, just in case you’re worried that we aren’t getting enough self developmental thoughts in, Kevin provided us with a CDL (Carpe Diem Lesson) on education and at the end left us with these questions:
What kind of change do you think this world needs to see? Do you feel that in your current state you’re capable of affecting that change in a meaningful way? What would you need to know or what skills would need to have to more effectively bring about that change? If you had to choose (without worrying about the lack of resource) what would you want to do for the rest of your life? All questions are required to be answered in a one on one conversation with Kevin within the near future.

On Saturday, we spent 5 hours horseback riding through the breathtaking farmland and countryside of Vinales. I repeatedly would burst into random smiles as the contrast of deep red soil, leafy shades of green and the expansiveness of the blue sky cacooned us all into a space of sweet simplicity and grounded contentment.

It is shocking how fast time is flying by. I could have sworn that we just got to Vinales but now a week has gone by and tomorrow we are moving slightly out of town to stay on a different farm for a week.

We are sending you all the freshness of the air that meanders through these Cuban fields. And just know that we may not be eating Reeses and Milky Ways this October 31st, but we’re sure filled up with the sugar that’s made from the sweetness of human connection. 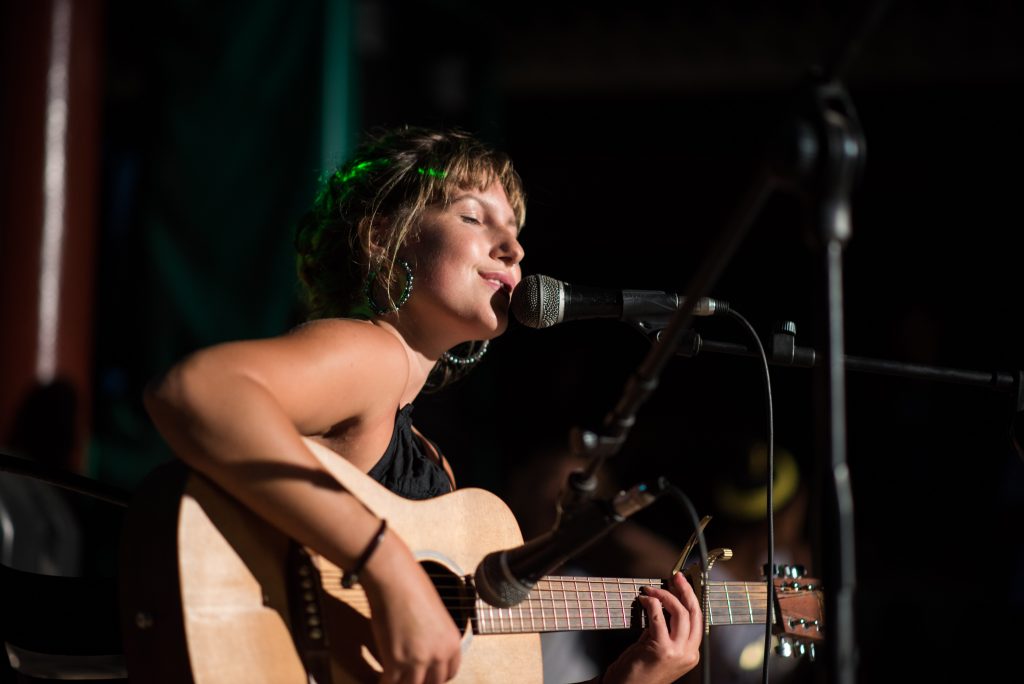 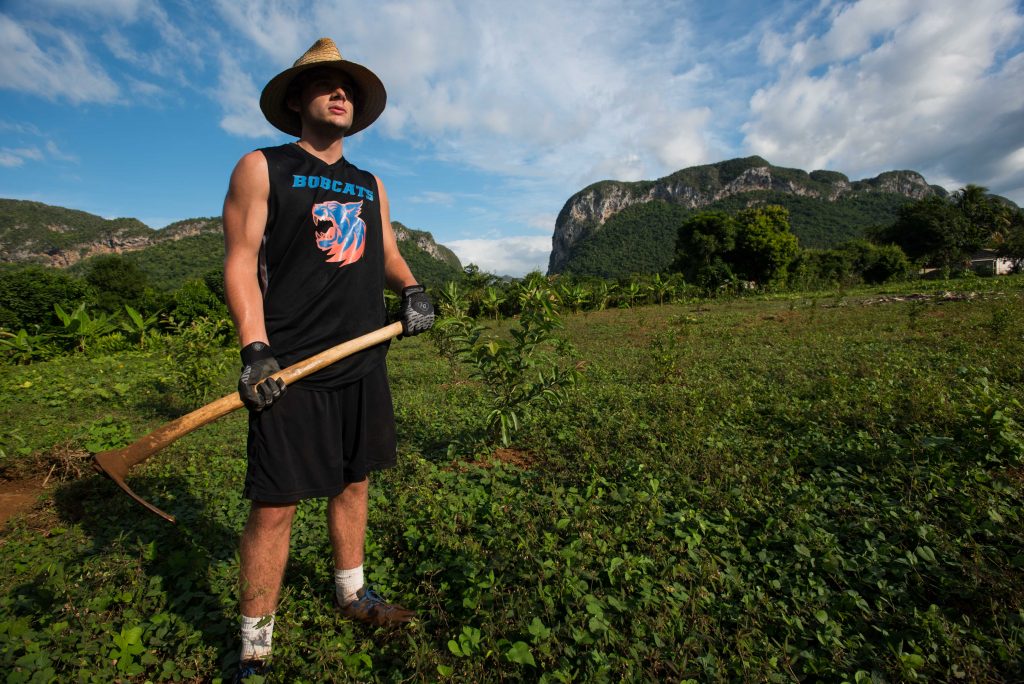 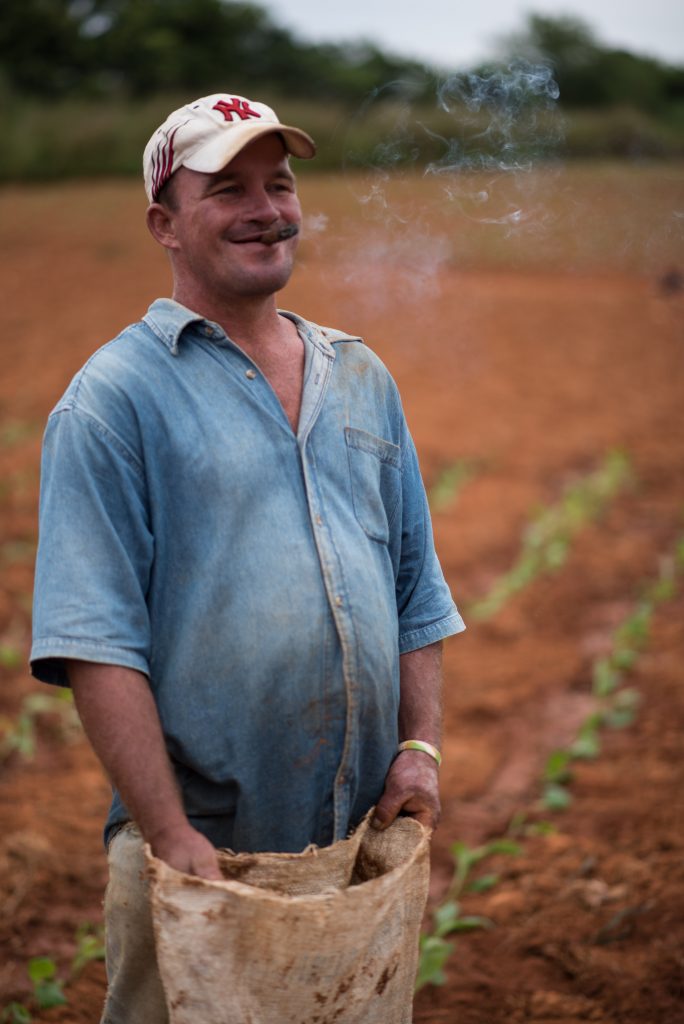 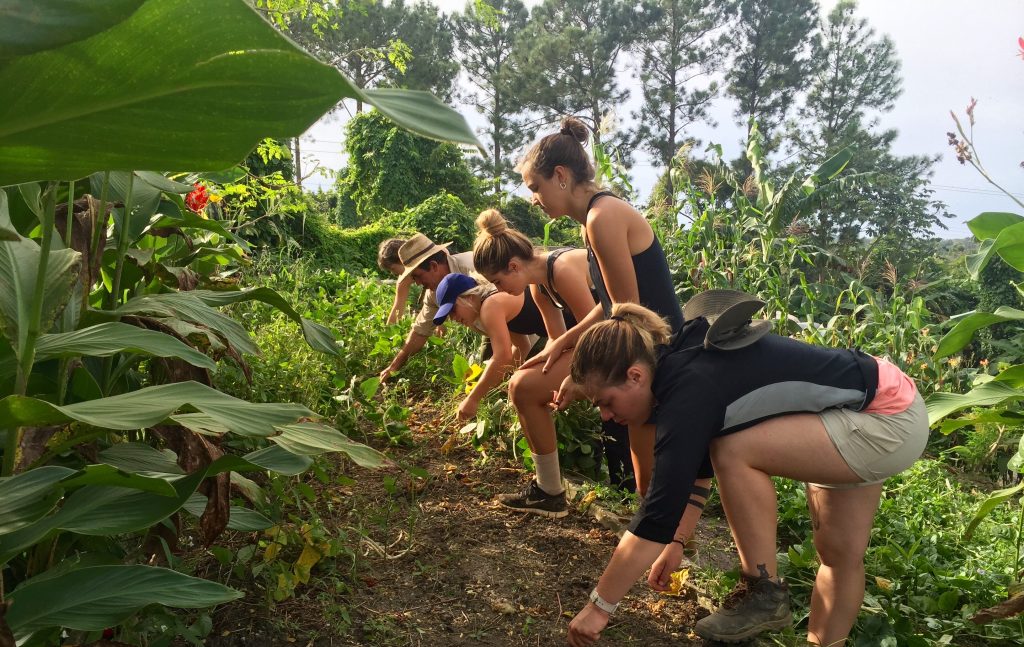 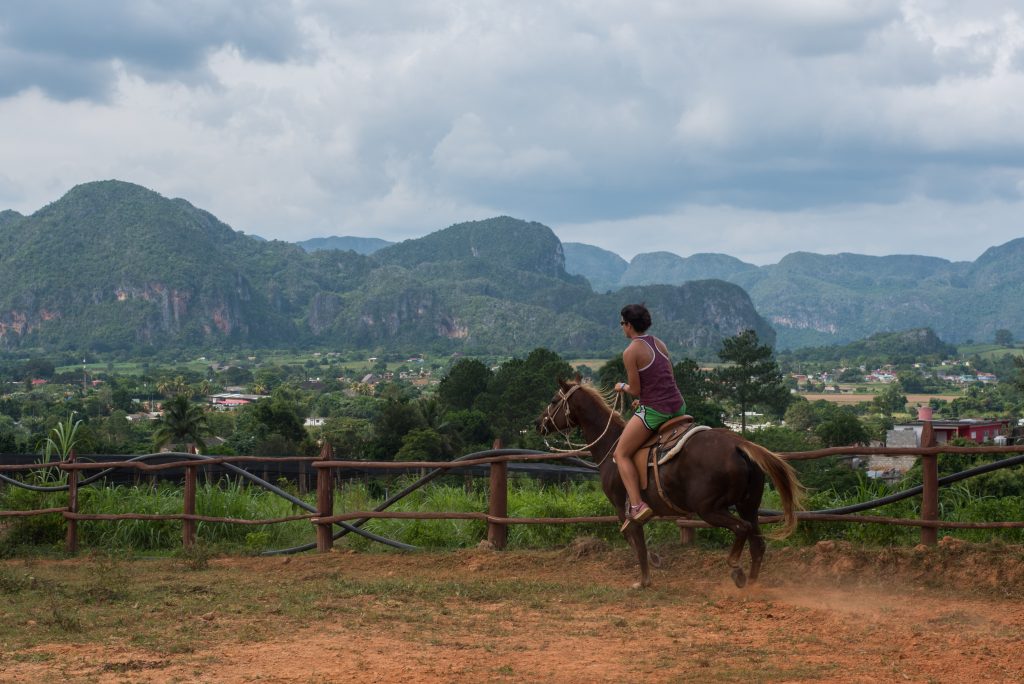 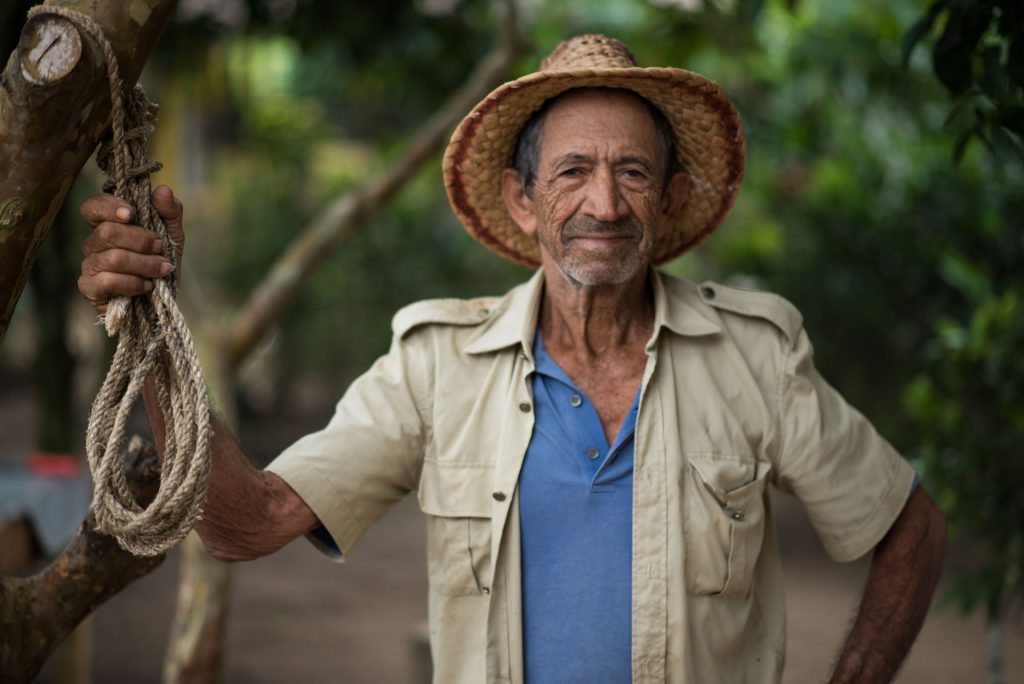 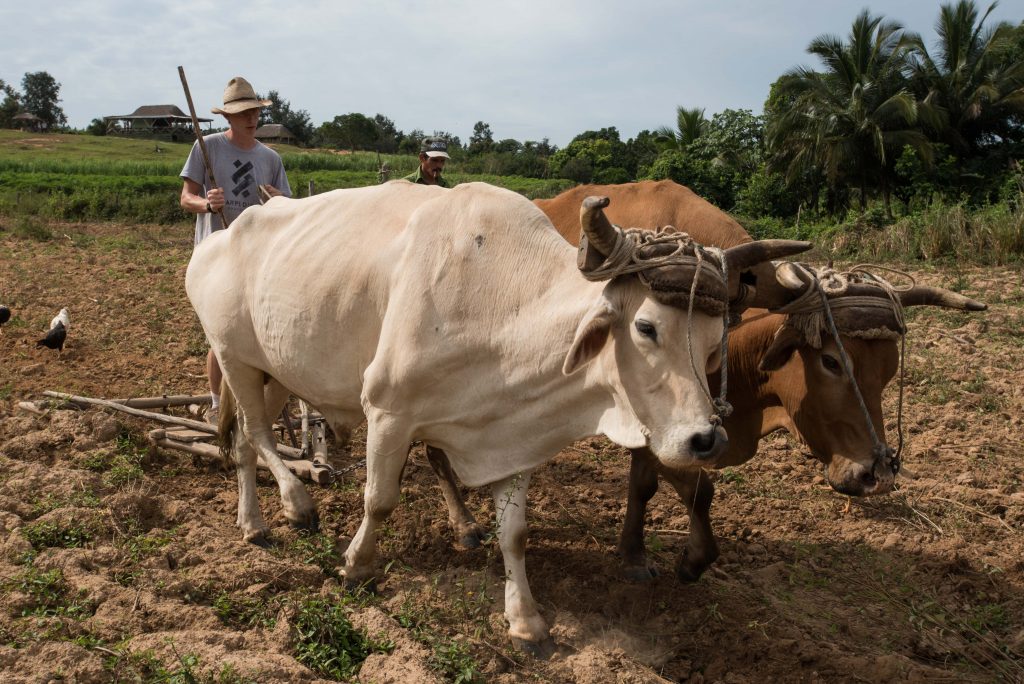 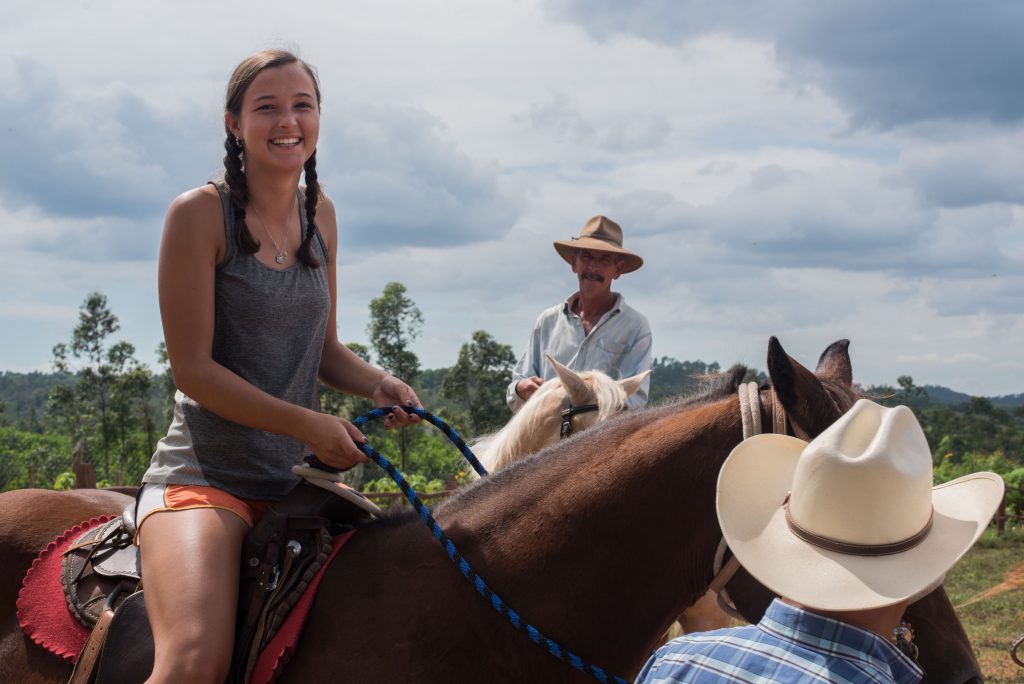 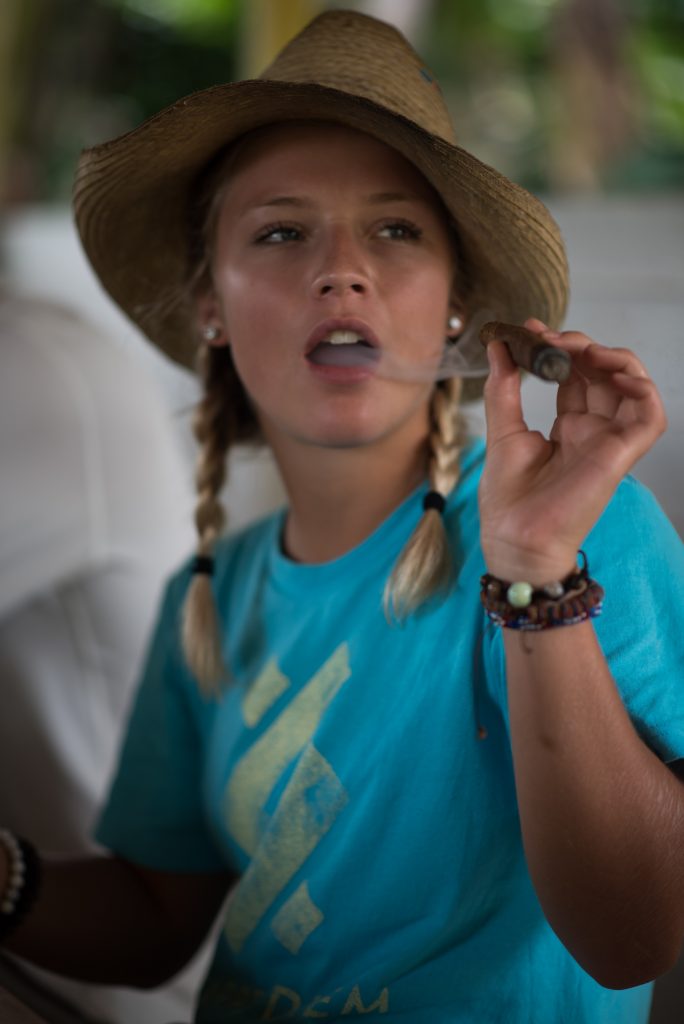